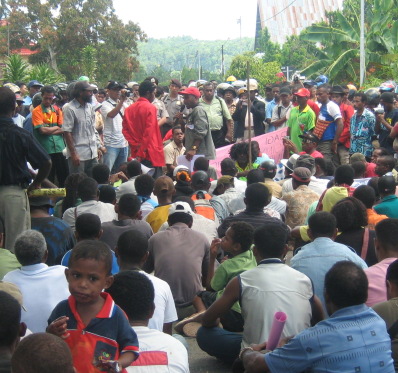 13 West Papuans involved in a peaceful demonstration yesterday have been charged with subversion and rebellion under Indonesian law. The group was arrested for carrying and waving the Kejora (Morning Star) flag which the government has banned from public display.

It must be stated, however, that under the law of Special Autonomy, the People of West Papua are guaranteed the right to express their cultural practices and political aspirations. The Kejora Flag is a symbol of autonomy and independence for West Papuans.

A media alert prepared by Nick Chesterfield, an Independent Human Security and Media Consultant to the West Papua Movement says the group is currently being questioned by the Criminal Investigation personnel of Manokwari police. “Serious and grave concerns are held for the potential for torture or ill-treatment whilst in the hands of the Police and intelligence, as all activists have caused a deal of international humiliation to the Indonesian security forces through creative and peaceful expression of their legitimate aspirations over the past few weeks.”

Braving the likelihood of being violently oppressed, West Papuans have held peaceful demonstrations in several cities since March 3, hoping to draw attention to the human rights and political situation inside West Papua.

During the first protest, which peacefully called for a referendum, the Indonesian Mobile Brigade police “arrested 70 peaceful demonstrators, inflicting beatings and torture on the West Papuan people.” Surprisingly, 67 of them were released later in the day, but not before being charged with “spreading hatred against the government.”

Another was held two days later which also called for a referendum, while demanding:

The government tried to violently dissolve this demonstration as well, but everyone dispersed before they had a chance to harm or arrest anyone. Subsequent demonstrations have gone along the same lines.

In another Media Alert by Nick, he asks people to “monitor this situation closely by calling the numbers in Manokwari below to ask why West Papuan people have been arrested and threatened with violence under Suharto era charges. It is important to put pressure on these Military and police figures.

Additionally, the West Papua National Authority and the Melanesian people of Papua call for “the international community to continue monitoring of the situation inside Papua, calling to Jakarta to allow international observers to go inside Papua as soon as possible, especially from the Australian, New Zealand and Pacific community. West Papuans are calling on the International community make immediate protests on the brutal and systemic repression of people’s legitimate right to peaceful expression by the Indonesian military, intelligence, police, and state sponsored jihadists and militias..

Rallies will continue until Indonesian and the international community hear and implementing referendum to the people of West Papua. West Papua needs a referendum on its future as a political solution to the ongoing genocide.”

You can contact the West Papua National Authority at westpa_authority@yahoo.com.au – and you can read more on the current situation at manukoreri.net, freewestpapua.org, and westpapuafree.wordpress.com