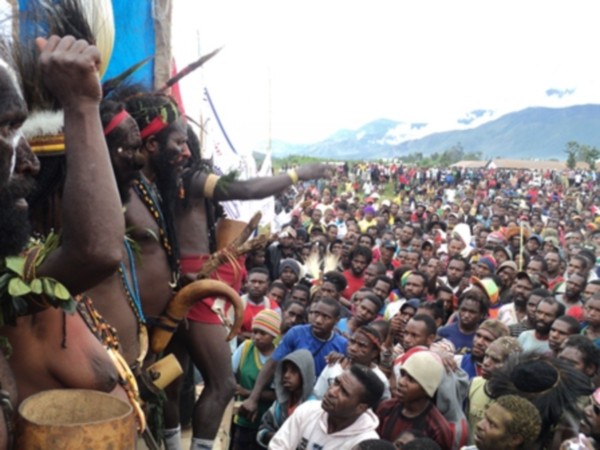 Last week marked the 48th anniversary of the West Papuan struggle for independence from Indonesia. To mark the occasion, thousands of Papuans took to the streets, raising their voice for freedom–and recognition from the International community.

West Papua: the road to freedom

By Nick Harvey of the New Internationalist
August 4, 2011

This week marked the 48th anniversary of the West Papuan struggle for independence from Indonesia. Thousands took to the streets and international lawyers are making a strong case for West Papuan self-rule.

It is a grief-stricken path that has been followed for generations. It stretches from when the Dutch colonised the region in the 19th century and cruelly continued when control was handed to Indonesia by a United Nations Temporary Executive Authority in 1963.

And last week the journey towards independence has led thousands of West Papuans onto the streets to demand the international community acknowledge their right to be free.

“West Papuans will never recognise their homeland as being part of Indonesia and we have a fundamental right to self-determination under international law,” said Benny Wenda, a West Papua independence leader living in exile in Britain.

“West Papuans have marched peacefully this week and have shown again that they can meet violence with peace to achieve this [aim], no matter how much [Indonesia] tries to intimidate us.

“A blind eye has been most cynically turned by the international community towards the situation of the people in West Papua.”

But with momentum building for the cause, the police have been reluctant to intervene in the recent protests.

“The demonstrations were so big this time they know if they act violently towards the protesters it would be noticed internationally,” says Wenda.

“We have been trying for 48 years now and, just like the Middle East, we need people power to change the world – but we also need people from around the world to notice.”

One of the biggest obstacles that the Free West Papua campaign faces is a lack of interest, let alone support, from the outside world.

“A blind eye has been most cynically turned by the international community towards the situation of the people there.”

As part of efforts to raise the profile of the region, a conference was held in Oxford this week by the Free West Papua campaign. International lawyers and activists spoke at the event to highlight the case for an independent West Papua under international law.

“In legal terms, the region has a clear right to self-determination,” said Foster.

“If you look at the New York Agreement [a treaty signed in 1962 by the Netherlands and Indonesia regarding the political status of West Papua, then known as West New Guinea] the United Nations was given trustee status over the region which was supposed to lead to self-determination in 1969. Indonesia has never disputed the fact it put its name to this agreement; therefore it implicitly acknowledges that it was bound by it.”

But the New York Agreement was followed in 1969 by the ironically titled Act of Free Choice, a vote by a tiny section of the population of West Papua, hand-picked by the Indonesian military, on whether the region should become independent or remain part of Indonesia.

Although it has since been widely recognised that the process was a sham, calls for a revote have consistently been ignored.

“There is no serious legal scholar anywhere in the world who thinks the Act of Free Choice was a genuine expression of the free will of the West Papuan people,” said Foster.

Embarrassing reality
“When Indonesians talk about this they try to steer clear of what actually happened on the ground in 1969. They’re not stupid, they realise how embarrassing it is.”

As long as the international inertia continues, the situation for West Papuans continues to worsen.

Yet even if the New York Agreement is somehow forgotten and the circumstances surrounding the Act of Free Choice somehow ignored, international law still falls heavily on the side of the West Papuans.

In 1960 the UN General Assembly passed a crucial agreement, the Declaration of Granting Independence to Colonial Countries and Peoples, which states: “All peoples have the right to self-determination; by virtue of that right they freely determine their political status and freely pursue their economic, social and cultural development.”

This firm legal ground has yet to translate into any meaningful concessions to the West Papuan people. And as long as the international inertia continues, the situation for West Papuans continues to worsen.

Clemens Runawery is an exiled independence activist who has been unable to return to his country for more than 40 years.

“The longer we stay part of Indonesia the more our status will suffer, both physically and demographically,” he said.

“Back in 1961 the vast majority of the people in West Papua were West Papuan, with only a minority from other places. Today this situation has been completely reversed. How much time do we really have left?”