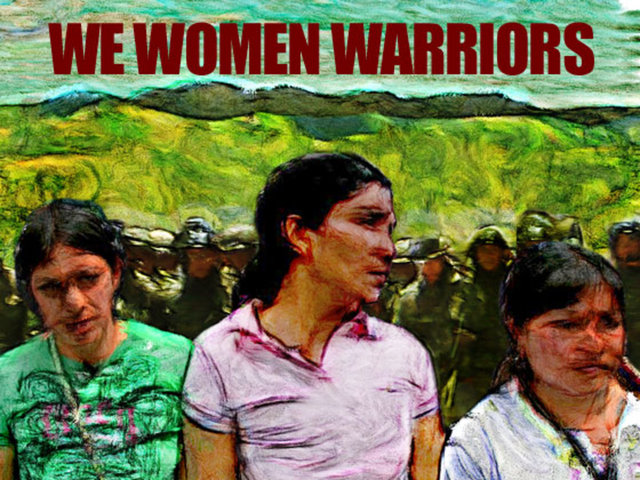 We Women Warriors (Nosotras Mujeres Guerreras) offers stories of hope, unshakable courage and faith in the survival of indigenous culture.

Five years in the making, We Women Warriors is an independent documentary that follows the lives of three indigenous women in Colombia as they strive to nonviolently defend their peoples autonomy in a climate of constant military violence:

Doris Puchana, is a young mother who governs a vulnerable Awá population that traditionally grows coca leaves. Ludis Rodriguez, is a spunky Kankuamo widow who is framed and captured on false charges of rebellion. Flor Ilva Trochez, is the first female Nasa governor of Jambaló, who leads a pacific movement to dismantle police barracks that endanger civilians by placing them in the line of fire.

Even though We Women Warriors bears witness to human rights abuses; the film gives a voice to these women who never lose hope, courage or faith. Despite her life being threatened after denouncing a massacre in her village, Doris does not abandon her tribal post. Once Ludis is freed she is able to move onward with her family, coping and healing after systematic violence swept through her region. Flor and her people put Colombia’s constitutional indigenous autonomy into practice and strive to create a territory free of armed fighters.

In their recent report, “Sweet Words, Air of Life“, the National Indigenous Organization of Colombia (ONIC) notes that all 102 distinct Indigenous Peoples in Colombia “are at risk of disappearing” because of the ongoing conflict between Colombia’s armed forces and paramilitary groups like the Revolutionary Armed Forces of Columbia (FARC).

Within this context, on January 26, 2009, the Constitutional Court of Colombia issued a Decree on behalf of the indigenous peoples, in which it was concluded that the indigenous peoples “are in danger of becoming physically and culturally extinct.” The decree ordered the national government to implement a Program that guarantees the Human Rights for all the Indigenous Peoples.

To date, the government has failed to create such a program.