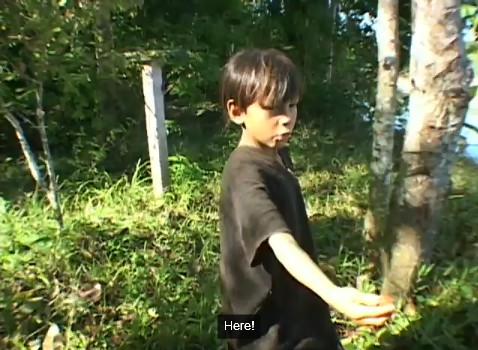 We struggle but we eat fruit

We struggle but we eat fruit (A gente luta mas come fruta) is a loving portrait of the Ashaninka Peoples and their efforts to protect their threatened forest lands and preserve their way of life.

Filmed in 2006 by two Ashaninka videomakers from the APIWTXA village in the Brazilian state of Acre, this award-winning documentary film invites us to learn about the Ashaninka’s many successful efforts to secure a sustainable economy, re-populate their rivers and forests with native species and defend their lands from the ongoing threat logging.

We struggle but we eat fruit is a part of the Video in the Villages project. To order a copy of the film, visit http://www.videonasaldeias.org.br/2009/video.php?c=13

The cooperative set up by the Ashaninka of the Amônia began operations in 1987 with resources from Funai. In the period November 1989 to February 1990 the Ashaninka also received a donation from the Gaia Foundation (a British environmental NGO) that enabled them to acquire a boat and create a small capital fund. Subsequently they received support from the BNDES (the federal development bank).

At the beginning of the 1990s the Ashaninka started investing in handicraft production. Marketing was helped by the political and media visibility of the Alliance of Forest Peoples at that time. For example, during the Earth Summit in Rio de Janeiro in June 1992 Ashaninka handicrafts were sold under the auspices of the Alliance. In the years that followed partnerships were established with the São Paulo store Amoa-Konoya, with the US company Aveda and with Funai’s Artíndia outlets and Moitará project, with the exhibition and marketing of handicrafts in Brasília.

The production and sale of handicrafts currently represents 70 to 80 percent of the capital of the cooperative and is the main economic activity of the Ashaninka. Nevertheless despite the capital obtained from commercial activities, access by the Ashaninka to manufactured goods remains limited to indispensible items: salt, munitions, fishing lines, fish hooks, machetes, soap…

As a means of creating a legal entity able to negotiate and carry out projects, as well as protect the interests of the Ashaninka of the Amônia, the Apiwtxa association was created in 1991 and officially registered in 1993.

The process of affirmation of ethnic identity and of cultural revitalization appears most clearly in the area of education with the notion of ‘differentiated education’ and the project supported since 1997 by the leadership of Apiwtxa to establish a ‘traditional school’. Recently the Ashaninka have also learned to use video to record important moments in the life of the community and their traditional knowledge. School and video, products of western society, have acquired a new significance among the Ashaninka of the Amônia. Non-indian instruments have thus been reinterpreted by the indians and now serve to strengthen cultural traditions and affirm ethnic identity.

Following demarcation of the Terra Indígena in 1992, the Ashaninka of the Amônia also began to carry out a series of sustainable development projects with different indigenous support organizations aiming at identifying alternatives to logging. They began an ambitious programme of environmental protection and restoration and sought to market some of their sustainably produced natural products. Thus within the new context of support to indigenous communities, marked by a growth in concern with the environment, the Ashaninka of the Amônia identified new ways to protect their environment and at the same time collect the benefits of their natural resources.

Together with the CPI (Centro de Pesquisa Indigenista, an NGO that no longer exists), the Ashaninka association developed a project to exploit the oils and essences of palms native to the region. More than fifty products – oils, leaves, pulp, nuts and others – were researched and catalogued during the three year project.

In 1994 under the framework of the Alliance of Forest Peoples, the Ashaninka obtained support from the Embassy of the Netherlands for a monitoring and environmental conservation project that financed the basic infrastructure needed to protect the indigenous reserve against incursions. In 1995 and 1996 the Ashaninka of the Amônia experimented with the collection of seeds of native tree species. Looking towards the reforestation market, the seeds were sent to the Forest Research and Studies Institute (IPEF) of the Luis de Queiroz Higher School of Agriculture (ESALQ) in Piracicaba, São Paulo. Under the terms of the partnership, ESALQ took responsibility for marketing the seeds and, after deducting 25 percent for storage and conservation costs, returned the balance to Apiwtxa on the basis of sales.

In 1999, at the same time as they were collecting murumuru nuts (Astrocaryum palm: A. murumuru) for the Tawaya company, the Ashaninka collected a vine known locally as ‘espera-aí’ (cat’s claw: Uncaria tomertosa). The production of around 25 tons had been to order and was sold to the Biosapiens company which has a representative in Cruzeiro do Sul.

In 2000, in partnership with the Secretariat for Coordination of the Amazon Region of the Ministry of the Environment (SCA-MMA) and the state government of Acre, financed by the United Nations Development Programme (UNDP), the Apiwtxa community started a beekeeping project.

Also in 2000 the Ashaninka of the Amônia submitted an ambitious project for ‘management of agroforestry systems and environmental restoration of degraded areas’ to the PD/A (Type A Demonstration Projects, one of the sub-programmes of the Pilot Programme for the Protection of the Brazilian Tropical Rainforests – PPG-7).

The concern of the Ashaninka for the environment and the sustainable use of their natural resources is also clear in relation to fauna. After the damage caused by logging and the predatory fishing and hunting practices of non-indian squatters, the Ashaninka on their own initiative started a management plan for fauna in the Terra Indígena. A number of animals, such as fresh-water turtles (shenpiri), almost disappeared from the region during the 1980s.

In 1993 during a community meeting, the Ashaninka discussed management of turtles and decided to ban the collection of eggs and consumption of turtle meat for a period of three years. The turtle population, facing extinction on the Amônia, started increasing again. Under the Management Project for Reproduction of Turtles, carried out in collaboration with Ibama and the NGO SOS Amazônia, the Ashaninka have since 1993 organized an annual celebration with the presence of authorities from the world of the brancos, on the day on which hundreds of turtles are released to repopulate the rivers within the Terra Indígena do Amônea.

The indians also prohibited the use of the timbó poison (waakashi) for fishing carried out on the Amônia and its main streams in order to conserve fish. Like fishing, hunting has also been the target of important initiatives aimed at repopulating the forest with animals traditionally hunted by the Ashaninka. The leaders of Apiwtxa report that since 1992 they have practiced rotation of hunting areas and have created refuge areas for animals.

Thus over the course of the last fifteen years, the Apiwtxa community has received funding from various sources and initiated partnerships to enable the implementation of economic alternatives that respect the environment. The Ashaninka of the Amônia have not only moved ‘towards sustainability’ but are now considered a successful example of the new direction of Amazon policy that seeks to reconcile nature conservation with viable community economic alternatives. It is not by accident that the Ashaninka Francisco da Silva Pianko was made Secretary for the Environment of the municipality of Marechal Taumaturgo in 2001, a post currently occupied by his brother Benki Pianko. Since 2003 Francisco has held the post of Secretary of State for Indigenous Peoples of Acre.