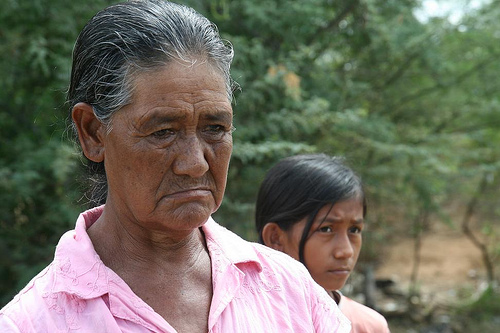 We just want to Live in Peace

The Garcia administration fails to understand that this is not a game for us. We are struggling for our right to live. But they tell us we do not have that right, that we are ignorant savages who must sit in silence while they rip our future from our back. And for what? To make America Happy? To build up an illusion of power so governments around the world will show their respect? So a handful of people can profit off the land we’ve maintained for over 10,000 years? We who only want to live in Peace

Look at what you’ve accomplished in your short time, President Garcia. Look how many scream out, how many are dead and terrified because of your failure as a leader. How many more will you take from us?

Perhaps it is time for you to move on so others can set the record straight and restore dignity and justice for ALL Peruvians.

You have stomped it out. You have burned it and dumped it into a river. You have ripped it from the stomachs of children as you have spat in their faces, calling them “enemy”.

The only enemies in the world are those we create in our minds because we do not have the will or the ability to walk a better path. You have shown this to countless numbers by your decisions and by those of your administration over the past seven days and since 1200 Indigenous Communities stood up 65 days ago.

You will continue to show us this example of “how not to be” until you either step down, or stand up and earn some measure of respect from Peruvians and the hundreds of millions around the world who are watching you right now, waiting for to stop playing these derelict games an start behaving like an actual leader.