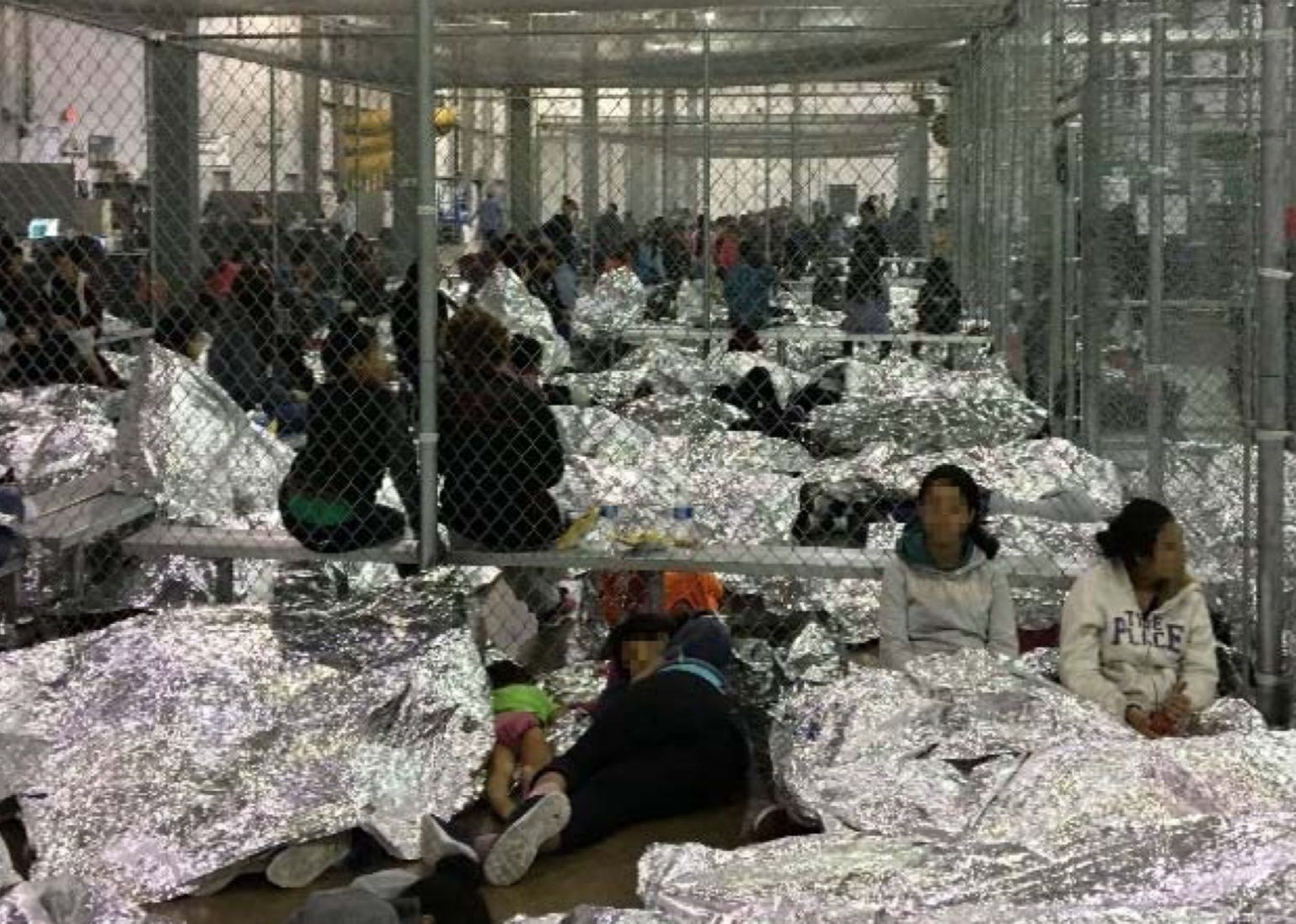 ‘We are caging Indigenous people’

US Government’s own investigation highlights the human crisis at detention centers
Overcrowding documented by the Department of Homeland Security's Inspector General.
Support our journalism. Become a Patron!

The human crisis on the border is worse than previously reported. The government’s own investigation shows that the treatment of migrants by border officials is a “ticking time bomb” that will continue to escalate. The government has had the report since May, but its contents were only released this week.

The Inspector General for the Department of Homeland Security reviewed five Border Patrol facilities and two ports of entry in Texas and “observed serious overcrowding and prolonged detention of unaccompanied alien children, families, and single adults that require immediate attention.” The report warned of potential riot conditions because of the treatment of those seeking asylum in the United States.

“The current situation on the Southern Border represents an acute and worsening crisis. Our immigration system is not equipped to accommodate a migration pattern like the one we are experiencing now,” the report said. “In May 2019, an average of 4,600 people a day crossed our Southern Border illegally or arrived at ports of entry without proper documents. For comparison, in May 2017, that number was less than 700 a day.”

It said Border Patrol enforcements were up 623 percent from the past year.

The report called the overcrowding an immediate threat. “We are concerned that overcrowding and prolonged detention represent an immediate risk to the health and safety of DHS agents and officers, and to those detained,” the Inspector General’s report said. “At the time of our visits, Border Patrol management told us there had already been security incidents among adult males at multiple facilities. These included detainees clogging toilets with Mylar blankets and socks in order to be released from their cells during maintenance. At one facility, detainees who had been moved from their cell during cleaning refused to return to their cell. Border Patrol brought in its special operations team to demonstrate it was prepared to use force if necessary.”

This Inspector General reinforces observations made by the Congressional Hispanic Caucus after a recent visit to the border. Rep. Joaquin Castro, D-Texas, said not all of the women in detention had access to water and some had not had a bath or shower in more than two weeks. Rep. Castro secretly recorded his visit on a mobile phone. Members of Congress were told by the Border Patrol not to take pictures during their visit.

“Rather than moving [asylum seekers] out of facilities, the Trump administration is paying these contractors [who run the detention centers], some of whom are making billions of dollars, to keep these people there longer and longer,” Castro told the PBS NewsHour. “They need to be moved out of these facilities as quickly as possible, they’re being held way too long, unnecessarily.”

Our border patrol system is broken. And part of the reason it stays broken is because it’s kept secret. The American people must see what is being carried out in their name. The @HispanicCaucus led a delegation of members of Congress to visit 2 border patrol facilities.

The Inspector General wrote that in addition to overcrowding, “Border Patrol’s custody data indicates that 826 (31 percent) of the 2,669 children at these facilities had been held longer than the 72 hours generally permitted … (under a court order). And 165 children had been in custody longer than a week.

“We are concerned that overcrowding and prolonged detention represent an immediate risk to the health and safety of DHS agents and officers, and to those detained,” the Inspector General’s report said.

The Department of Homeland Security said the surge of migrants crossing the Southern border has led to an “acute and worsening crisis.”

The inspectors said they left the detention centers because their very presence added to an explosive situation. The report said, “Specifically, when detainees observed us, they banged on the cell windows, shouted, pressed notes to the window with their time in custody, and gestured to evidence of their time in custody (e.g., beards).”

I can’t understate how disturbing it was that CBP officers were openly disrespectful of the Congressional tour.

If officers felt comfortable violating agreements in front of their *own* management & superiors, that tells us the agency has lost all control of their own officers. https://t.co/zZjNaodplr

Members of Congress reported the Border Patrol was dismissive of their congressional oversight visit. Rep. Alexandria Ocasio-Cortez, D-New York, wrote on Twitter, that many of the children she spoke with spoke Indigenous languages. “Some I met were budding trilingual (speak K’iche’, Spanish & learning English).”

A report by ProPublica found that Border Patrol agents had a secret Facebook page that disparaged both migrants and members of Congress. “The Facebook group is called “I’m 10-15” and boasts roughly 9,500 members from across the country. (10-15 is Border Patrol code for “aliens in custody.”)

The group described itself, in an online introduction, as a forum for “funny” and “serious” discussion about work with the patrol. “Remember you are never alone in this family,” the ProPublica story said. “In one exchange, group members responded with indifference and wisecracks to the post of a news story about a 16-year-old Guatemalan migrant who died in May while in custody at a Border Patrol station in Weslaco, Texas. One member posted a GIF of Elmo with the quote, “Oh well.” Another responded with an image and the words “If he dies, he dies.”

NEW: The acting head of @DHSgov calls for an investigation and accountability following our reporting on the secret Border Patrol Facebook group.
👇👇👇https://t.co/fzaRd3LadF https://t.co/LN7SMkOYLV

Meanwhile, a U.S. District Court Judge issued a ruling Tuesday that required the government to adjudicate asylum claims faster or release migrants from custody. “The purposes of immigration detention are simple and straightforward: to facilitate removal (if removal is deemed justified), and to prevent flight and harm to the community,” wrote Judge Marsha Pechman from Seattle.

There is a crisis at our border that needs to be fixed. Not being truthful about the hard work our border agents are doing doesn’t help solve this problem.https://t.co/toJSqKmvT0

The White House issued a statement calling the decision a “war on the rule of law.”

“A single, unelected district judge in Seattle issued an injunction that prevents the government from ensuring the detention of those aliens who cross the border unlawfully until the completion of their immigration court proceedings,” the White House said.

“The decision only incentivizes smugglers and traffickers, which will lead to the further overwhelming of our immigration system by illegal aliens. No single district judge has legitimate authority to impose his or her open borders views on the country. We must restore our democracy and ensure Americans have the voice to which they are entitled under our Constitution,” the White House statement said.

This report was first published by Indian Country Today. It has been re-published on IC with permission.