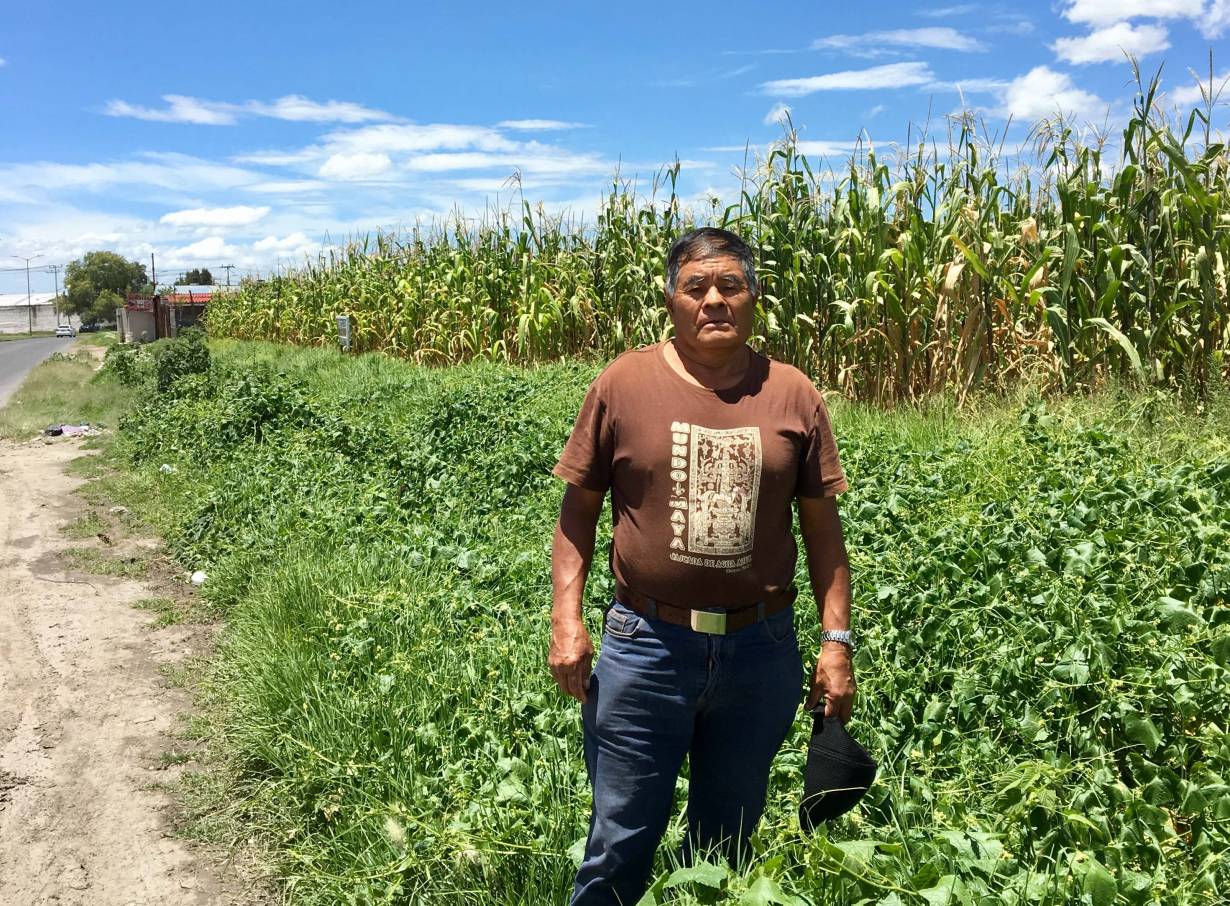 Laiza and others in his indigenous community fear they may be about to lose another battle against urbanisation - one revolving around Mexico City's new international airport
'Our way of life is over,' said Antonio Rojas, 67, standing in a field outside of San Lucas Xolox, Mexico, August 20, 2019. Thomson Reuters Foundation/Oscar Lopez
Support our journalism. Become a Patron!

MEXICO CITY – For most of his life, Filiberto Mena Laiza had worked the earth, growing carrots, cilantro, beans and other crops in what was once rich agricultural land some 50km north of Mexico City.

But as the metropolis of 21 million expanded in recent decades, swallowing up farmlands near the centuries-old town of San Lucas Xolox where Laiza lives, the 54-year-old indigenous farmer was forced to leave his livelihood behind.

Condos have sprung up where corn had grown before, bringing with them more people, pollution and crime, Laiza said.

After being robbed by unknown assailants of his earnings coming home from the fields one too many times, he decided farming had become too dangerous – and now operates a small taco stand with his wife in San Lucas’ main square.

“The process of human development can’t be stopped,” Laiza said with a sigh of resignation.

“But what worries me is what are we going to leave for those that come after? … Just garbage.”

Now Laiza and others in his indigenous community fear they may be about to lose another battle against urbanization – one revolving around Mexico City’s new international airport.

Set to be built on a military airbase called Santa Lucia, just a 15-minute drive from San Lucas, the project is being spearheaded by Mexican President Andres Manuel Lopez Obrador.

Lopez Obrador put the decision to a public, non-binding vote, with 70% of the roughly 1 million voters who participated opting to scrap the partially-constructed airport in favour of the Santa Lucia project.

But critics say that the nationwide vote, which polled just 1% of the electorate, did not consider the views of indigenous groups who will be most impacted.

Like Laiza, many worry that the 36-square-km development is going to suck up their rapidly dwindling resources, especially water from an aquifer that is already heavily depleted.

“Water is a vital liquid that moves us all,” Laiza said. “Where will all the water that will be needed to maintain this monster come from?”

The head of Mexico’s environment ministry, Semarnat, has publicly insisted that it has resolved the water problem.

“The water is going to be moved with an aqueduct, there aren’t any major problems,” Toledo Manzur told the press in September.

But residents are unconvinced, worrying not just about the airport itself, but also the surrounding infrastructure, which, they say, will alter the countryside.

“Logically, casinos, hotels and shopping malls are going to arrive,” said Mateo Martinez Urbina, 63, a doctor in the nearby town of Tecamac and president of the local water board.

“More than benefits, (the airport) is going to bring us much harm.” 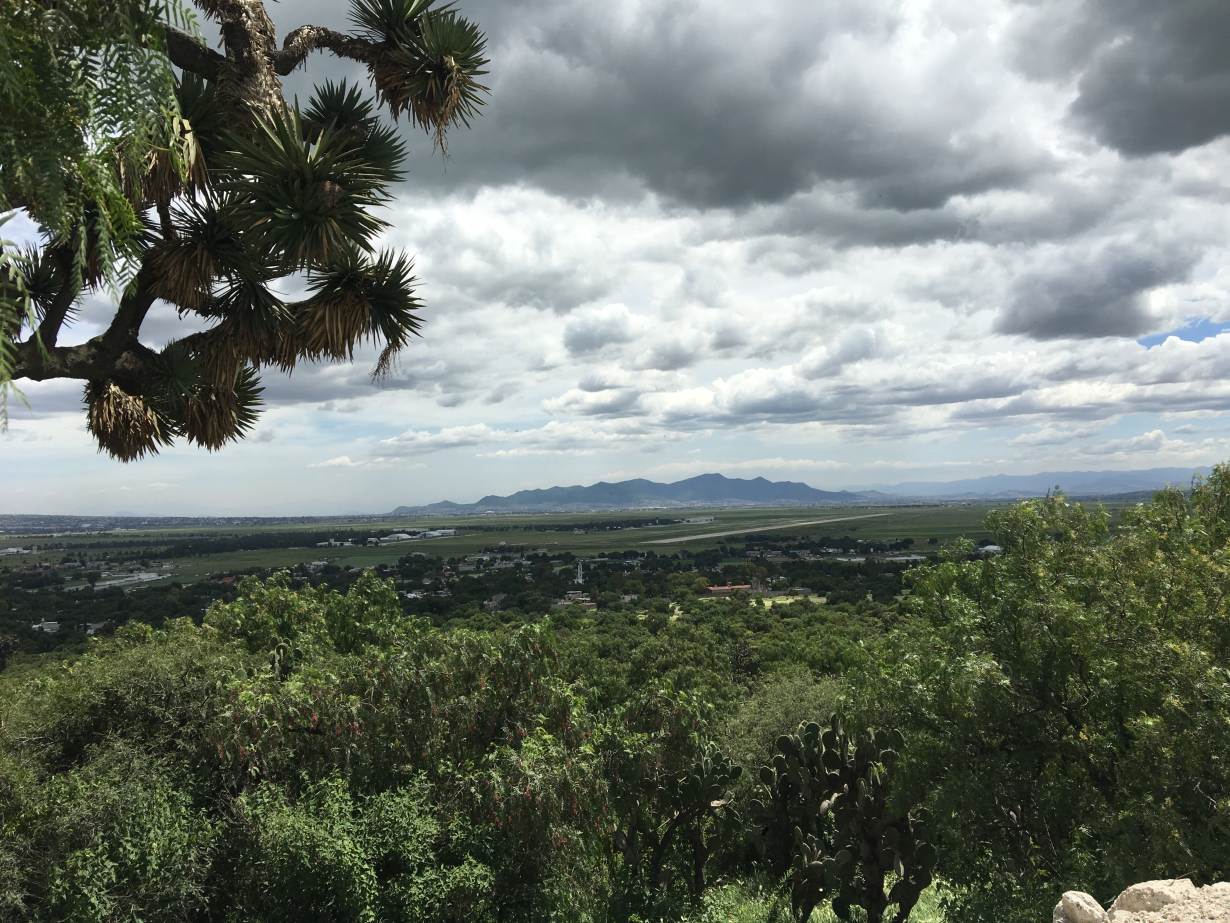 View of the Santa Lucia airbase and its surroundings from a hill above San Lucas Xolox, Mexico, August 20, 2019. Thomson Reuters Foundation/Oscar Lopez

The Lopez Obrador administration has said the project will be environmentally sound and respect the communities surrounding the airport site.

“(It will) reduce emissions, waste production (and) save water,” Gustavo Ricardo Vallejo Suarez, a former director of the Mexican military’s school of engineers, who is overseeing the project, told reporters in April.

According to an environmental impact study by the engineering institute of the National Autonomous University of Mexico, the airport also represents “a great opportunity for job creation … that favour(s) current inhabitants and future generations.”

Environmental experts, however, say the concerns of Laiza and other residents regarding water resources are well founded.

A study from the Mexican government published in 2015 found that the aquifer underneath Santa Lucia and its surroundings was already operating at a deficit of more than 58 million cubic metres per year.

But Eric Galindo Castillo, a scientist and professor at the Latin American Technological Institute in the state of Hidalgo, said the government figures do not take into account the dozens of illegal wells in the area.

The real deficit, he said in emailed comments, is closer to 400 million cubic metres per year – and that is before the airport even begins construction.

“It’s unimaginable,” Galindo Castillo said of the Santa Lucia project. “It lacks planning. You put more infrastructure, you’re going to take more water. But from where?”

When approached for comment, the environment ministry referred the Thomson Reuters Foundation to a series of pre-prepared infographics and presentations regarding the Santa Lucia project.

In its diagnosis of the airport’s regional environment, Semarnat acknowledged that “in relation to the bodies of water, the aquifers are overexploited (and) contaminated by the discharge of sewage from the urban area and industry”.

In another document, the ministry said it would not take water from the aquifer under Santa Lucia, drawing instead from another aquifer in nearby Hidalgo.

But according to Galindo Castillo, this plan is not viable given the scope of the airport project: the aquifer in Hidalgo, he points out, is heavily contaminated, creating a potential environmental hazard for the surrounding communities.

“Pollution (in the Hidalgo aquifer) is primordial,” he said. “The moment you extract more water, you’re going to leave all those contaminants in the subsoil.”

Public concerns about the aquifers and other environmental issues have landed the airport project in some legal trouble.

In August, a state judge overruled Semarnat’s approval for the airport after a collective of civil society organisations, law firms and citizens called #NoMasDerroches (No More Waste), filed an injunction request.

The ruling has effectively put a halt to the airport construction until the injunction is resolved.

The case is one of more than 80 court proceedings brought against the Santa Lucia project – most of them by #NoMasDerroches – in what Lopez Obrador called a “legal sabotage” during a press conference in August.

But despite the delays, local residents are resigned to the fact that, eventually, the airport will be built, transforming their fading way of life in the process.

“This is a ticking time bomb,” said Laiza, the taco vendor.

“We’re not going to be able to stop it – we have to be honest with ourselves … I just want them to respect my town.”