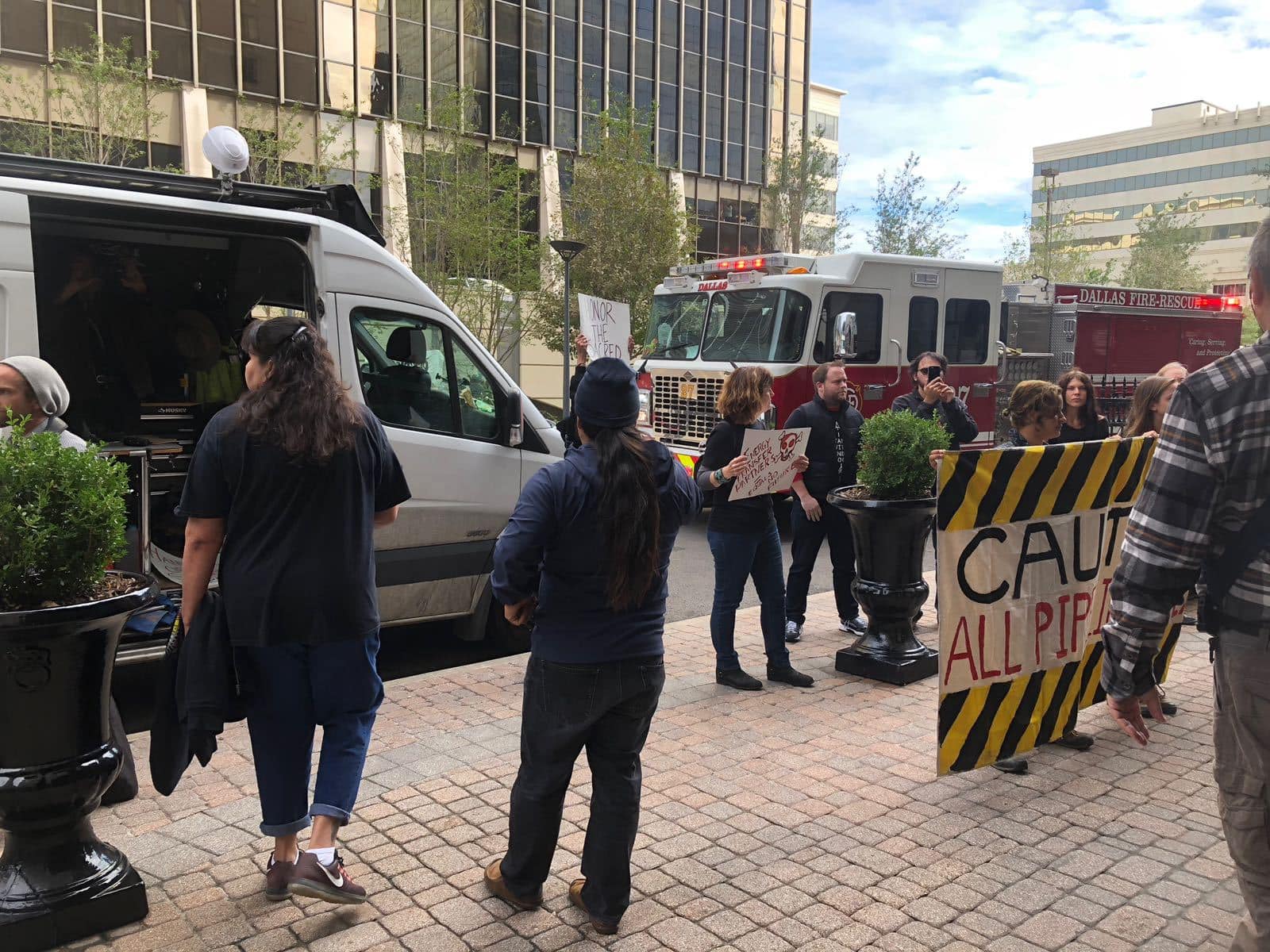 Lead plaintiffs in the case are Cissy Thunderhawk and Wasté Win Young, both enrolled tribal members of Standing Rock, together with Rev. John Floberg, the priest for St. James’ Episcopal Church in Cannon Ball, located near the oil pipeline’s crossing of the Missouri River.

They allege the defendants’ 2016-2017 road closures on North Dakota 1806 adjacent to spirit camp mobilization were a violation of the rights to freedom of speech, assembly, religious exercise, travel, commerce, and the Privileges and Immunities Clause of the U.S. Constitution.

They request a jury trial and compensation for damages. They also ask the court to “require defendants to obtain approval, in writing, from an official designated by the impacted tribe before temporarily or permanently closing a right-of-way in a manner that disproportionately impacts, economically or otherwise, a reservation in or near the State of North Dakota.”

As shareholders vacated the premises, a banner dropped from an adjacent building, reading, “Kelcy Warren Hates Black and Brown People.” Locke filmed the incident. She and Foytlin were both arrested, and Foytlin was put in solitary confinement for six hours.

However, that didn’t stop the adherents of Louisiana’s L’eau Est La Vie (Water is Life) Solidarity movement from locking down the mansion of the man in charge of the pipeline projects the next day.

The self-proclaimed water protectors locked themselves to gates at the entrance of the Warren’s residence, demanding his company abide by a court order to provide an evacuation route for the African American community of St. James.

The community on the path of the Bayou Bridge Pipeline construction is at the terminus of the same route on which the Dakota Access Pipeline carries its load of highly volatile fracked oil — from the Bakken Formation centered at the Mandan Hidatsa & Arikara Nation in North Dakota — across unceded 1851 Ft Laramie Treaty territory of the Oceti Sakowin near the Standing Rock Nation.

St. James lies in the heart of what is dubbed Cancer Alley because of the toxic materials handled at its cluster of chemical plants, refineries and oil export facilities.

Although state regulations require ETP to consider the impact its Bayou Bridge Pipeline will have on St. James, the company failed to do so, further endangering the community, the opponents claim.

The Viacom Media Network primetime weekly news series, featuring Jordan Klepper, which is set to launch in 2019, was filming construction of the Bayou Bridge Pipeline deep within the swamps of the Atchafalaya Basin when the incident occurred.

As the journalists were recording and maneuvering two small boats within the narrow bayou, a larger ETP security boat passed by, creating life-threatening wakes that sunk both within seconds, according to survivors.

“L’eau Est La Vie Camp’s all femme captains got the boats to the banks of the swamp as they were quickly submerging into the gator-filled swamp,” they said in a media release.

The Oct. 18 shareholder meeting was to vote approval on ETP’s restructuring and merger with Fortune 500 company Energy Transfer Equity.

The watchdog report concludes that “Energy Transfer still goes too far in attempting to silence the free speech of its opponents, at the expense of human rights and the environment.”

As pipeline fighters stormed Warren’s gates on Oct. 19, Energy Transfer Equity announced it had been able to complete the merger with Energy Transfer Partners, despite the disruption of the shareholder meeting.

“Energy Transfer is committed to operating its business in a manner that honors and respects all people and communities in which we do business,” it says in its corporate and social stakeholder responsibility statement.

Its toll-free contact number for Bayou Bridge Pipeline concerns and emergency matters is 800-753-5531.

This article was originally published by Native Sun News. It has been re-published on IC with permission.