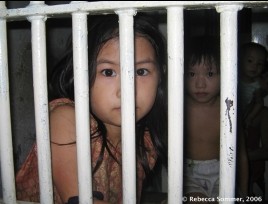 Hunted Like Animals is an eye-opening documentary about an ongoing, but unknown, genocide – against the Hmong people in the jungles of Laos. Coerced into joining the CIA’s anti-communist efforts during the Viet Nam war, this ethnic minority became a Secret Army. When the U.S. pulled out of Southeast Asia in 1975 and the Lao kingdom was overthrown by the communists, the Hmong became targets of retaliation and persecution.

Hundreds of thousands fled the country; others ran to remote mountainous regions of Laos. Over thirty years and two generations later, the Hmong in hiding are still mercilessly hunted, attacked, raped, tortured and killed by the military.

Since 2004, the crackdown has intensified and those who can escape seek refuge in Thailand. The traumatized refugees have not been promised protection or help. Instead, they are threatened with deportation back to Laos, the very place from which they barely escaped.

In this documentary, the refugees speak for the estimated 20,000 voiceless people still trapped in the jungle, surrounded by Lao and Vietnamese soldiers – and hunted like animals. (source)

Please contact the filmmaker Rebecca Sommer, if you would like to purchase a DVD – or if you have questions:
sommerfilms@gmail.com

Segment from the film, WE ARE NOT REBELS