Warning to Zapatista: we’re coming back in two weeks 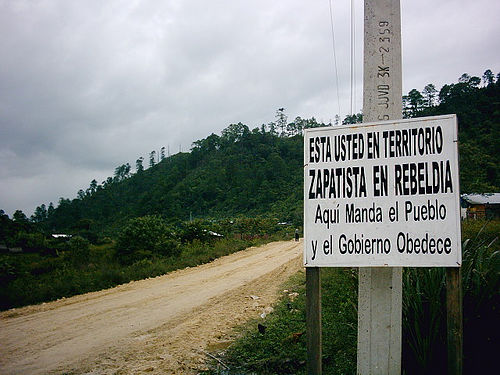 A group of 200 Mexican soldiers and federal and municipal police tried to enter a Zapatista community last Wednesday, June 4, under the pretext of searching for marijuana plants.

According to a recent communique from the Good Government Council, which you can find below, when the military convoy arrived the community told them to “Go back to where you came from, you aren’t needed here. We want freedom, justice, and democracy –not soldiers.”

The soldiers replied by accusing them of growing marijuana, saying “we’re going on ahead come hell or high water.” (It was a false accusation though, since all Zapatiata maintain a “dry law,” prohibiting drugs and alcohol within their territories.)

At that point, the Zapatista took hold of “machetes, shovels, rocks, slingshots, ropes and whatever else was at hand,” and successfully drove them back.

While they were leaving, the military convoy said, “Well, this time we’re not going any further, but we’ll be back in two weeks and we’re going in there come hell or high water.” Then they trampled the cornfield, the community’s only food source.

For over a year now the Mexican State has been running a desperate campaign against the Zapatista. Starting around the Intercontinental Encuentro, which took place in Yaqui territory last September, the campaign has been getting more and more intense.

Today the Zapatista are faced with almost daily aggressions, as John Gibler points out:

On May 19, federal agents and soldiers, arriving in helicopters and military convoy, entered the community of San Jerónimo Tuliljá, in the Caracol of La Garrucha, breaking into houses and pushing people around without explanation.

On May 22, a large group of armed men from the PRI (Institutional Revolutionary Party) invaded the Zapatista Caracol of Morelia, cutting off the community’s electricity and attacking people in their homes throughout the night. The gunmen wounded over 20 Zapatistas, six of whom were taken to the hospital in serious condition.

“It is as if we are seeing the preparations for what will be another Acteal,” said Subcomandante Marcos in a recent interview published in book form in Mexico, referring to the December 22, 1997 paramilitary massacre of 45 indigenous men, women, and children gathered in a church in the community of Acteal.

“But now they are not looking for a conflict between aggressors and defenseless people, but really a confrontation,” he said.

Zapatista autonomy is not only a threat to the perceived legitimacy of the state, but it is the structure of resistance that maintains and protects Zapatista territories, land recuperated through the 1994 uprising and cared for and cultivated since.

The Road to the Future Good Government Council makes the following denunciation:

2. All in all there were around 200 provocateurs.

3. Before entering the town of Garrucha, the headquarters of the Caracol, about 30 meters from the edge of the town, 3 trucks from the convoy stopped and 4 soldiers got out of a truck as if to outflank the town of Garrucha by using the road to our collective cornfield. The people reacted and organized themselves to eject the convoy. The soldiers immediately got back in their truck and continued along the road. Those in front were intimidating the people, taking photos and filming them as they waited for the other provocateurs.

4. Arriving at the spot where the soldiers from Patiwitz were stationed, another military convoy joined the column, which continued on its way to engage in another provocation.

5. They arrived at Rancho Alegre, a community known as Chapuyil.

6. They got out of the trucks and headed for the town of Hermenegildo Galeana, where all the people are Zapatista support bases, accusing the townspeople of growing marijuana in their fields.

7. People throughout the Zapatista area of Garrucha, including the autonomous authorities, are witness to the fact that no such fields exist. The Zapatistas here work in their cornfields and banana plantations. They are willing to struggle for freedom, justice, and democracy and resist any provocation whatsoever.

8. Around 100 soldiers, 10 public security police, and 4 judicial agents headed for the town of Galeana. All the repressors painted their faces to confuse people and to avoid being recognized in the hill country. They walked for a while on the road and then went into the hills on their way to the town.

9. The federal column was guided by a person named Feliciano Román Ruiz, who is known to be from the Ocosingo municipal police.

10. The townspeople of Galeana –men, women, girls, and boys– organized themselves to eject the troops, come what may.

11. They met up with the troops in the middle of the road and the melee began. All the Zapatista women, men, boys, and girls told the soldiers in no uncertain terms, “Go back to where you came from, you aren’t needed here. We want freedom, justice, and democracy –not soldiers.”

12. The soldiers said, “We came here because we know there’s marijuana here and we’re going on ahead come hell or high water.” That’s when the people took out their machetes, shovels, rocks, slingshots, ropes and whatever was at hand, and drove them back.

13. The soldiers said, “Well, this time we’re not going any further, but we’ll be back in two weeks and we’re going in there come hell or high water.”

14. They took another road down to the village of Zapatista support bases called San Alejandro where 9 vehicles with 40 soldiers and 10 policemen were waiting for them.

15. On their way down, they trampled the cornfield, which is the town’s only food source.

16. In the Zapatista town of San Alejandro, the 60 repressive agents took up their positions, ready for a confrontation.

17. The people reacted and used everything at hand to drive back the federal forces.

18. Soldiers from Toniná, Patiwitz, and San Quintín participated in the confrontation.

19. People of Mexico and the world, we want to tell you that it won’t be long before another confrontation occurs, provoked by Calderón and Juan Sabines and Carlos Leonel Solórzano, the municipal president of Ocosingo, who’ll call out their dogs from all the forces of repression. We are not drug dealers. As you know, we are brothers and sisters of Mexico and the world. It’s clear that they’re coming for us Zapatistas. All three levels of the bad government are coming after us, and we’re ready to resist them if that’s what’s necessary, just as our slogan says: We’ll live for our homeland or die for freedom.

21. Comrades of the Other Campaign in Mexico and other countries, we ask you to be on the alert because the soldiers said they’ll be back in two weeks. We don’t want war. We want peace with justice and dignity. But we have no other choice than to defend ourselves, resist them, and eject them when they come looking for a confrontation with us in the towns of the Zapatista support bases.

22. All we can tell you is to look and see where the provocation is coming from. We’re now informing you of what’s going on, hopefully in time.

That’s all we have to say.