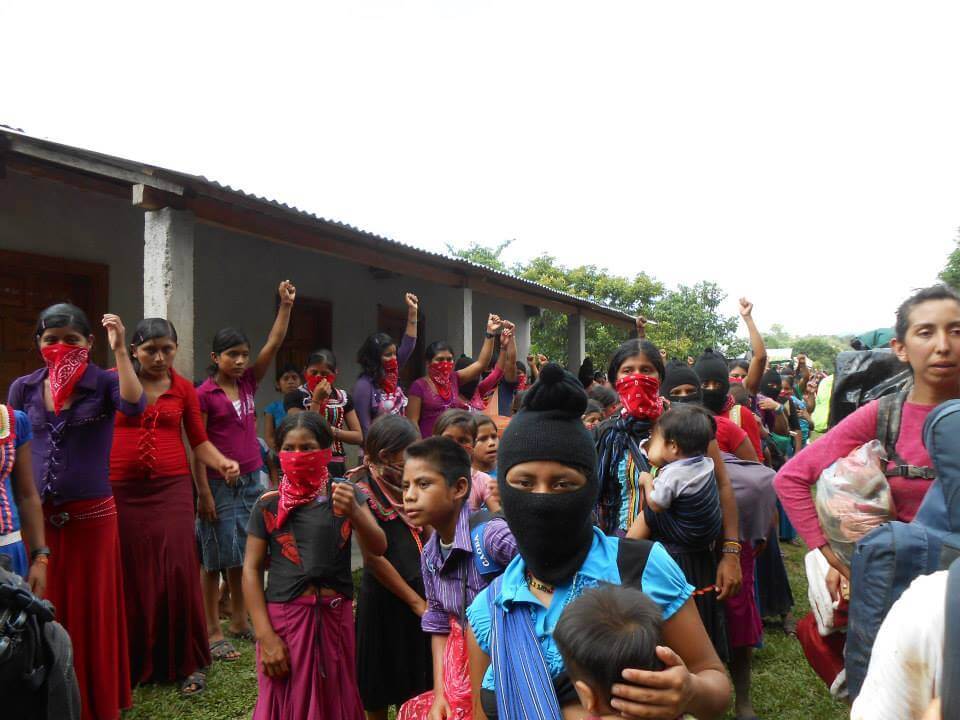 The War against the Zapatistas and the Role of the Media

War claims neither to kill, threaten, nor destroy; it is the people who clash and fight among themselves. As violence grows in given regions, War argues that it is the fault of the communities who live there, justifying its intervention as a pacifying and mediating force between the conflicting groups. It is an objective and an external force which presents itself as the only way in which inter-community conflicts can be resolved… But even during the deployment and development of its economic force, War needs privacy. It wants to create all by itself the accounts of what happens, insisting that the version of reality it thinks up is the only true account. No-one else should feel the need to look any closer. Carlos Montemayor in La Guerrilla Recurrente

The words above were written by an expert on the history of guerrilla movements in Mexico and the government counterinsurgencies that have fought against and almost destroyed them. Montemayor writes that War speaks, that it is an entity that gives declarations to the press, paying the media to include statements and to pass them off as news – as if they had been signed and investigated by reporters. In this way, the image of the State is managed.

War does the dirty work of the State in the preservation of “peace and order” for the few Mexican families who have everything. However, it also disguises itself as the fight against hunger and poverty (encouraging forced birth control in indigenous communities, like the former president of the PRD). It creates a façade of academic reason or objective and unbiased journalism, even in cases where the real aim is obvious – like the desire of Aguilar Camín, Nexos, and the CIDE (and the SCJN) to defend the paramilitary groups in Chiapas. It claims to give information related to official sources and tries (unfortunately without success) to give the versions of each party involved. In war, however, the official truth is the one constructed by the State – the party responsible for that war.

War “requires privacy”, just as happened during the US invasion of Iraq. Here, the only source of information for international news organisations stationed in the Washington-dominated zone was the official line of the US army. In Mexico, the counterinsurgency campaign (or so-called “dirty war” which began in the 1970s) has had almost the complete privacy it has required. How many people, for example, are aware of how indigenous communities in Guerrero were massacred (in similar ways to those who ‘disappeared’ under the Southern Cone dictatorships) in order to exterminate followers of Genaro Vázquez and Lucio Cabañas? And how many people have an idea of the amount of blood spilt in order to seal the fate of dozens of armed groups throughout the country in the 70s and 80s?

The aim of War is to be perceived as a neutral, objective factor that, from the realms of power and with the law in its hands, brings order (or the ‘rule of law’) to places where it was broken by “allegedly armed civilian groups” (as Zedillo called them) or “self-defence groups” (as counterinsurgent intellectuals call paramilitaries in Chiapas).

The notes published by La Jornada about the violent incursion of the CIOAC-H [Independent Central of Agricultural Workers and Campesinos-Historic] in the Zapatista territory of La Realidad show all the symptoms of the War that wants to avoid calling itself such (i.e. the ‘dirty war’ of counterinsurgency). The State once again presents itself as a neutral factor in an inter-community conflict, using the “objective and professional” veil of journalists like Elio Enríquez to present information handed over by the Chiapan government and the aggressors of the CIOAC as truth. Through the written expression of Enríquez on behalf of the counterinsurgency, he became a tool in the state’s covert War.

The official narrative presented is one of an inter-community conflict – a “confrontation between the support bases of the Zapatistas (EZLN) and the Historical and Independent Union of Agricultural Workers and Peasants (CIOAC-H)” which “left one Zapatista dead and 13 CIOAC-H members injured”. The CIOAC-H version of events affirms that it killed an indigenous Zapatista supporter whilst repelling an aggression. However, neither La Jornada nor Proceso investigated the official version of Velasco’s government in greater depth. Nor did they give any context which would help to understand such a violent act.

The relationship between La Jornada and the governments of Chiapas, at least since the government of Sabines (an AMLO follower) and that of the ‘ecologist’ Velasco, is one of loyalty. It always presents the government’s version of events in the hope of balancing out the Bellinghausen notes which could easily be seen as Zapatista communiques. In the absence of a Zapatista communique in this instance, however, the official version, signed off by Elio Enríquez, became the paper’s only voice. The counterinsurgent government of Sabines may have rewarded and financed films by writers and film-makers like Poniatowska and Mandoki, but the change from the PRD to the Verde Ecologista party doesn’t change the friendly relationship between La Jornada and the Chiapan government.

The words on social networks have been those of La Jornada and Proceso, although perhaps mixed with the commentaries of those reposting the articles of these papers. The ‘free press‘, meanwhile, has been able to give the Zapatista account of events and explain why they have suffered one death (and several injuries) and how the “confrontation” arose.

While there have unfortunately been no comments from figures like Montemayor or other journalists who could place the events into a political, social, and military context, the comments from the Centro de Medios Libres (CML) on Facebook, for example, can help to clarify the situation. The only negative point is that the comments only appeared on Facebook, and not on the CML’s page of alternative information. As a result, they could not immediately reach a greater audience or be shared on social networks, by email, or on other alternative websites which replicate alternative sources in order to break down media barriers.

It is worth citing the brief but clarifying comments of the CML in order to combat the decontextualized notes in La Jornada and Proceso and allow us to look at events with a less misinformed perspective:

The most important CML comments, in the light of the previous information, are as follows:

It is very important to understand that the CIOAC-H is not just a regular peasant or indigenous group, but one of many groups (affiliated to the PRD and other parties) which have received gifts from the government in exchange for participating in the hostile paramilitary siege against the Zapatista Caracoles that PAN, PRI, PRD, and Verde Ecologista governments have initiated and constantly encourage. None of this appears in the official press (hence why it is called ‘official’) and, unfortunately, the free press has only just begun to release this information of the social networks.

Let us ask ourselves why the official voice – that of the War that claims not to be war but a mediating force in conflicts between communities and organisations – is so interested in making it seem like Zapatistas are involved in “confrontations” with other indigenous groups. It is the narrative that the Mexican State uses to “justify its intervention as a pacifying force between the different parties”. In other words, it is preparing the way for an escalation in the counterinsurgency conflict in which the word ‘paramilitary’ will lose its prefix.

Article Translated by Oso Sabio from a text originally produced in Spanish at zapateando.wordpress.com. Republished from floweroftheword.wordpress.com