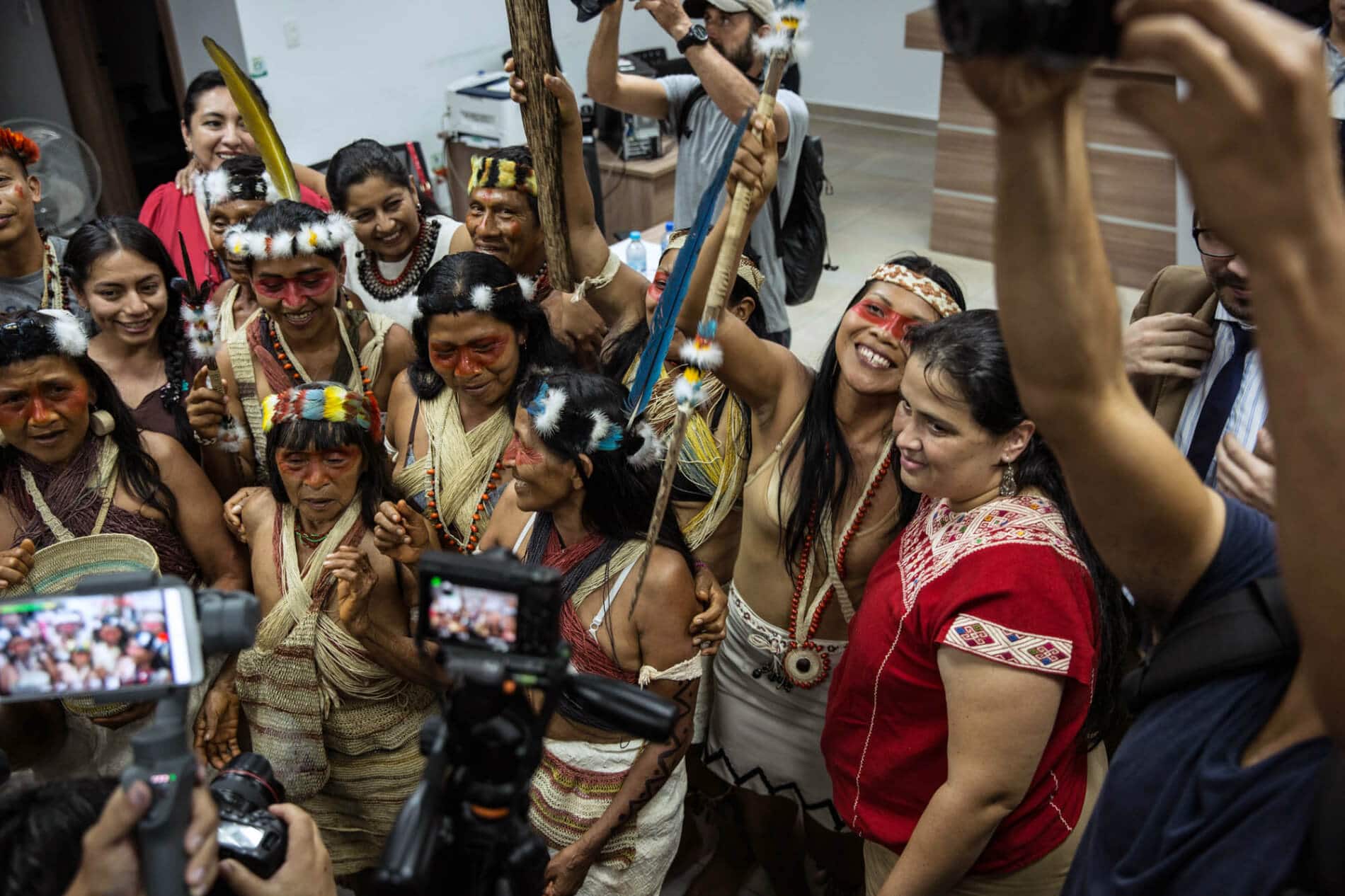 Puyo, Ecuador – On April 26, 2019, the Waorani people of Pastaza won a historic ruling in Ecuadorian court protecting half a million acres of their territory in the Amazon rainforest from being earmarked for oil drilling. The decision by the three-judge panel of the Pastaza Provincial Court immediately voids the consultation process with the Waorani undertaken by the Ecuadorian government in 2012, indefinitely suspending the auctioning of their lands to oil companies. The verdict also disrupts the contemplated auctioning of 16 oil blocks that cover over 7 million acres of indigenous territory by providing an invaluable legal precedent for other indigenous nations across the Ecuadorian Amazon.

“The government tried to sell our lands to the oil companies without our permission. Our rainforest is our life. We decide what happens in our lands. We will never sell our rainforest to the oil companies”, said Nemonte Nenquimo, President of the Waorani Pastaza Organization (CONCONAWEP) and plaintiff in the lawsuit. She added, “Today, the courts recognized that the Waorani people, and all indigenous peoples have rights over our territories that must be respected. The government’s interests in oil is not more valuable than our rights, our forests, our lives.” 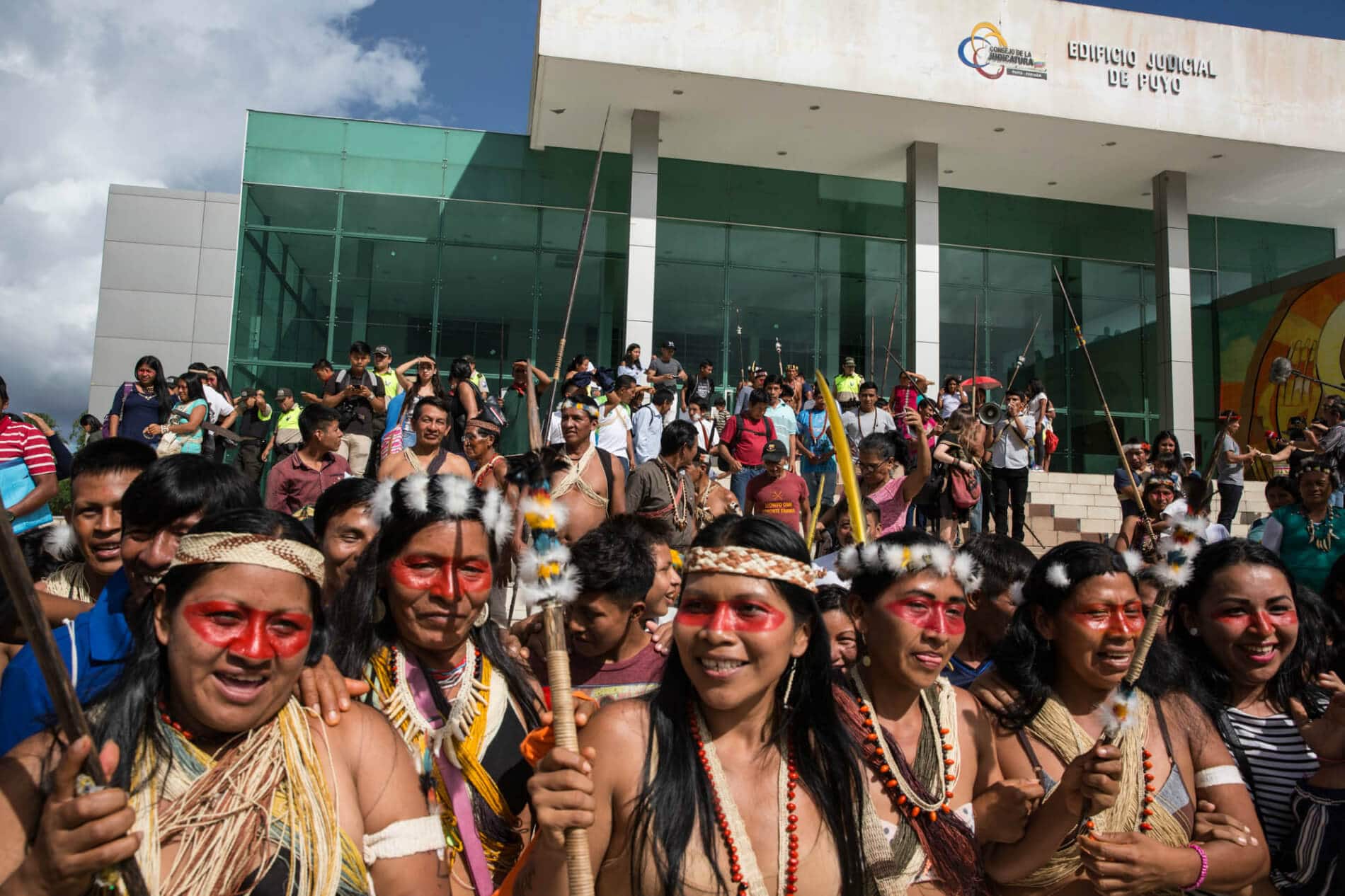 The court’s decision represents a major setback for the Ecuadorian Government’s plans to develop oil resources across the southcentral Amazon, and could mark a watershed moment in the indigenous movement to permanently protect their rainforest from oil drilling, and other extractive projects. The panel of judges ruled that the Ecuadorian government must repeat the free, prior and informed consent process according to the standards of international law and the Constitutional Court of Ecuador, and that the Ministry of Energy and Nonrenewable Resources and the Ministry of the Environment must sufficiently train government officials regarding the right to free, prior and informed consent and self-determination before sending them out into the field.

“Today we have protected our forest from oil drilling; we have protected our water from contamination; we have protected our children from sickness. This is a legal precedent for indigenous rights”, said Oswando Nenquimo, spokesperson for the Waorani of Pastaza. He added, “But the fight is far from over. The government will appeal because they still want the oil beneath our land. Indigenous Nations across the Amazon and the world must band together to protect our homes.”

The Waorani people’s lawsuit has emerged as flashpoint in the South American country, highlighting the stark gap between the Ecuadorian government’s thirst for oil revenues to relieve international debt and indigenous peoples’ internationally recognized rights to free, prior and informed consent, self-determination, collective territory and the rights of nature. Amidst the backdrop of decades of contamination and cultural disruption in indigenous territories across the Amazon by oil operations, the Waorani’s court victory stands as a landmark victory for indigenous nations fighting to protect the last bastions of wild-standing forest. 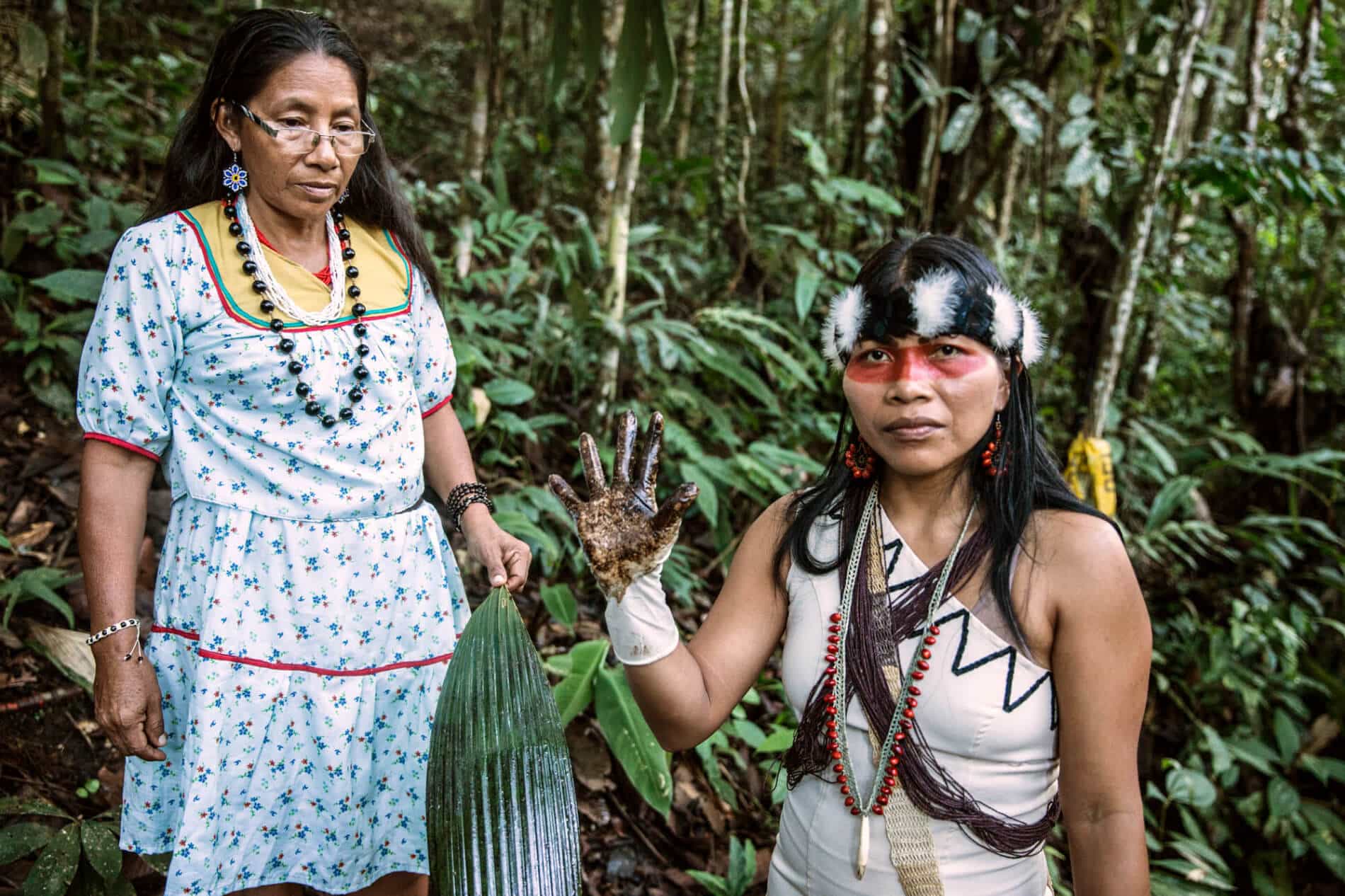 In the verdict, the three-judge panel cited a pattern of structural flaws in the 2012 consultation process. These included wide-ranging failings with its design and implementation, including bad faith and false reporting on compliance, unintelligible communications, grossly insufficient time allocation, unaddressed complexities of translation, and poorly crafted informatic materials. But importantly, the ruling also exposed deeper underlying failings, declaring that the government disregarded the Waorani’s traditional governance and decision-making practices, omitted the inclusion of the Waorani’s legitimate traditional elder leaders pikenani in any significant way, broadly failed to guarantee that the Waorani fully understood the implications of the government’s plans for oil drilling in their territory, and did not ensure that they were given the opportunity to make a collective decision regarding those plans.

“This is a major precedent for indigenous rights across the Amazon. Today, the court has recognized a pattern of deceit, bad-faith and manipulative tactics in the Ecuadorian Government’s attempt to earmark the Waorani people’s lands for oil extraction” said Mitch Anderson, Executive Director of Amazon Frontlines. “This is a huge step forward in the battle to ensure indigenous people’s rights over their lands are respected. Guaranteeing indigenous peoples’ rights to decide over their future and to say ‘No’ to destructive extractive projects is key to protecting the Amazon rainforest and halting climate change.” 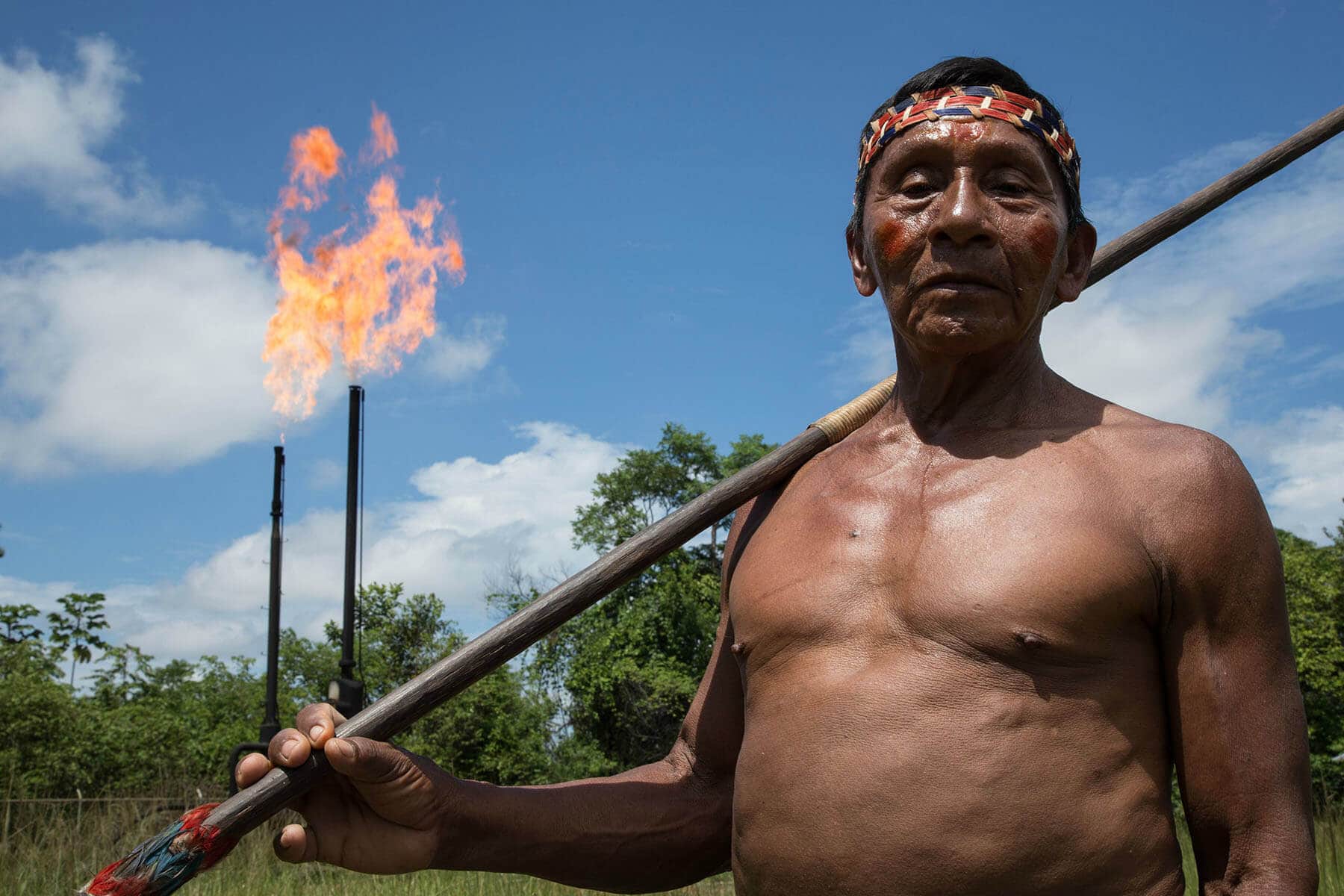 “The Court’s ruling today declaring the violation of the Waorani’s rights to free, prior and informed consent and self-determination means that the Waorani territory overlapped by Oil Block 22 cannot be sold at auction until those rights are guaranteed. But it should also be interpreted to mean that the State cannot auction off the territories of the six other indigenous nations in the southern Ecuadorian Amazon, which were subject to the government’s same flawed and unconstitutional prior consultation process in 2012. The advance of oil destruction in the southern Amazon was brought to a halt today in this court by the courage and dignity of the Waorani of Pastaza”, said Maria Espinosa, lawyer for the Waorani from Amazon Frontlines.

Hundreds of Waorani youth and elders traveled from their jungle communities and marched through the city of Puyo in celebration, joined by other indigenous nations from across the country, highlighting the widespread support and attention this case has drawn. The Waorani’s global digital campaign to warn the Ecuadorian government that “Waorani territory is not for sale” has built a global movement of solidarity with the struggle, garnering more than 100,000 signatures, and in recent days close to 15,000 people sent emails to the President of Ecuador, his ministers and the court demanding that Waorani rights be respected. More than 50 environmental and human rights organizations published an open letter calling on the judiciary to adhere to well-established national and international law in the Waorani case. 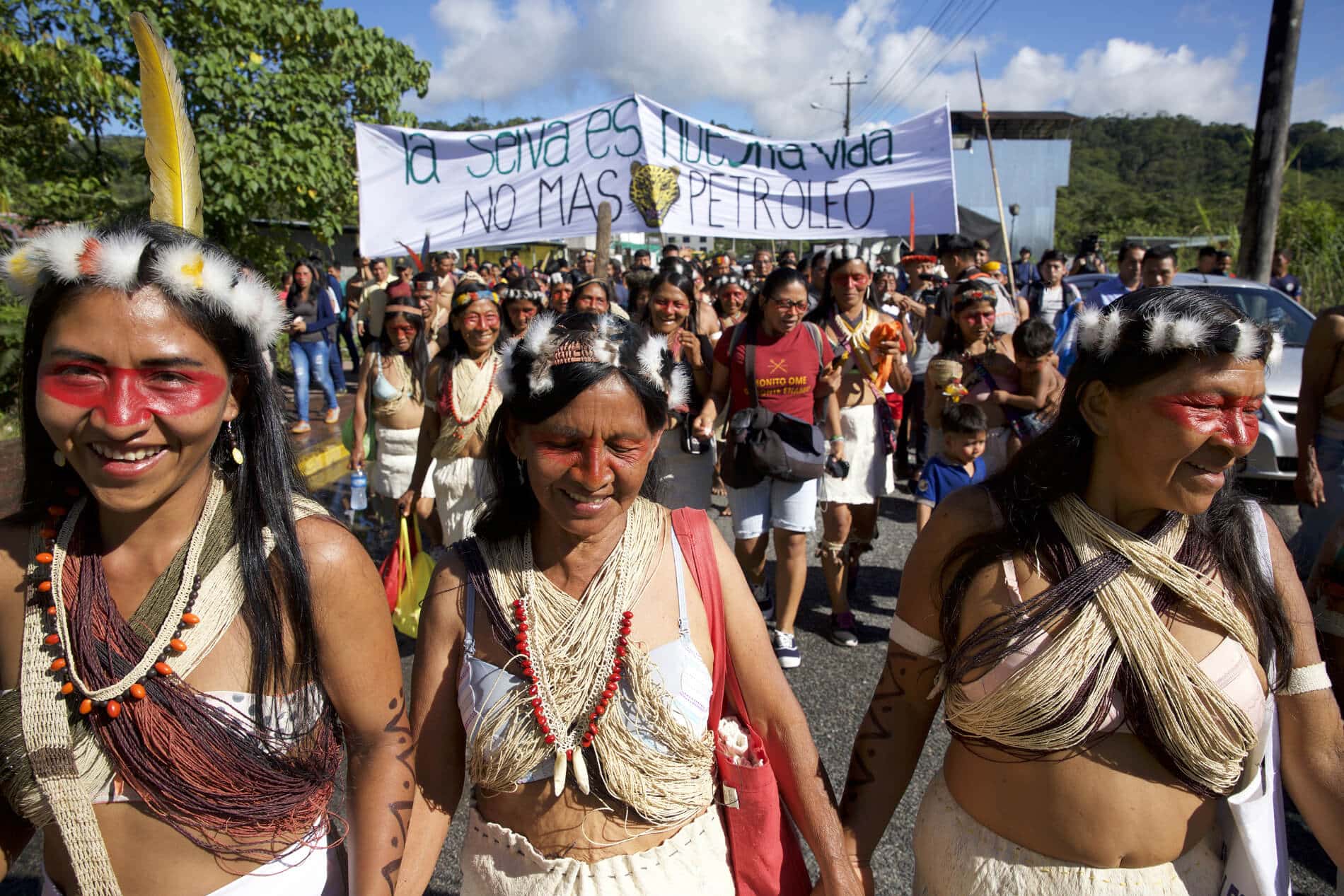 The Ecuadorian state will likely appeal the ruling to the Provincial Court, whose subsequent ruling would be final. The Waorani have pledged to ensure the ruling is upheld in domestic and, if necessary, international courts.

“Now is the time to put even more pressure on the appeals court to ratify this ruling and for the government to respect our right to free, prior and informed consent and self-determination. Tonight, we celebrate, but tomorrow we go back to work to ensure that our territories are oil-free forever,” added Oswando Nenquimo.

The Waorani’s lawsuit is co-filed by CONCONAWEP (Coordinating Council of the Waorani Nationality of Ecuador-Pastaza) and Ecuador’s Human Rights Ombudsmen.

NEWS UPDATE: The Ecuadorian Government has announced that they will appeal the court’s decision. The Waorani are standing firm in their struggle to defend their lands and lives, and they are calling upon the world to help sign this letter to Ecuador’s government to demand respect for Indigenous Rights and the court’s ruling: http://bitly.com/waoraniresist