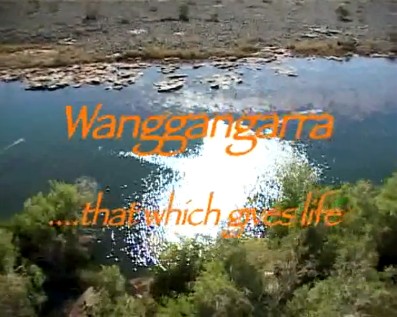 Wanggangarra… that which gives life

Wanggangarra is a film about family histories, relationships & respect amongst the Yindjibarndi and Ngarluma people of the west Pilbara, Western Australia. It was produced by the Juluwarlu Aboriginal Corporation, an Indigenous organization dedicated to the recording, preservation and maintenance of Yindjibarndi language and culture.

To learn more about the Yindjibarndi People and their ongoing struggle to protect their culture and lands from the mining company Fortescue Metals Group and the State Government, visit http://www.yindjibarndi.org.au .

Synopsis
Wanggangarra–that which gives life–tells the story of families and their origins; describes the concept of home or ngurra; and explains traditions of skin relationship and respect within extended families and the traditional life of the community. The film celebrates the richness and complexity of family life with an attention to detail not documented before for the Yindjibarndi.

The concept of being Ngurrara is explained as the privilege and right of all countrymen and countrywomen that tie their identity to a specific area of country from which their ancestral family derived.

Explanation of galharra goes deeper into its role in working thalu sites (sites of increase), its governance over how particular places in country should be approached, its imposition of restraints in the consumption of food, preparation of medicines and utilization of particular resources in the country – restraints that prohibit ‘free-for-all’.

Galharra is further illuminated in the conduct of Birdarra Law, in a public event where boys of the Burungu and Bananga sections are returned to the community after initiation. The roles and responsibilities of the mothers, fathers, uncles and aunties, who in this instance are Garimarra and Balyirri, and fulfil the function of garnggu, are explained, including the obligation to fast during the day before their sons are brought back. The roles and responsibilities of the brothers, sisters, cousins and grandparents, who in this instance are Burungu and Bananga and called jirnjarngu, are summed up – they are the workers for the ceremony and are required to make the yartha (shade shelters) and the birdarra (pathway of leaves) early in the morning, prepare the bed in the ground, organise the mothers and fathers in the right place on the birdarra, sing and dance, paint the garnggu mob and adorn them with the marni (symbolic body painting) and jirlimirndi (arm ornaments).

The meaning of particular gestures is explained: The dipping of the initiate’s hand into the flour at the head of the Birdarra signals respect for the garnggu mothers and fathers, and especially for the travelling men who did the work of initiation. The gesture denotes that ‘this food is for you, thankyou for the hard work you have done’. The ritual weeping over the boys after they are laid in their ‘beds’, is not sorrowful, but sad and happy at the same time – sad because the parents have lost their boys; happy because their boys are free now ‘like when the joey is out of the pouch’ to take up the responsibilities of adulthood.

The significance of each song – walimarra, thurndinha and maliyarra – which accompany particular parts of the procession and signal transitions are explained, as are restrictions concerning diet and ablutions. Description of the ceremony proceeds right to the conclusion of the initiates’ internment and the release of their jirnjangu carers from their duties.

The essential lessons of the ceremony are distilled to one word – respect: The respect Yindjibarndi hold for each member of their community and the respect they show in the acquittal of their responsibilities according to custom and Law.

The film carefully describes specific relationship names within the multilateral structure of relationships running in every direction through an extended family of several generations, ‘relationships important for keeping the peace, maintaining respect, and helping the community to work together’. The film closes with the following advice:

“Respect is not just given or owed to elders and others in your family and community, respect is something each man and woman earns by the way they live their life. Just as the young respect their elders, so elders have to respect their young. In the end it all comes back to make a strong family, a strong community. It gives you strength in your own life, it is what gives you life – Wanggangarra!”