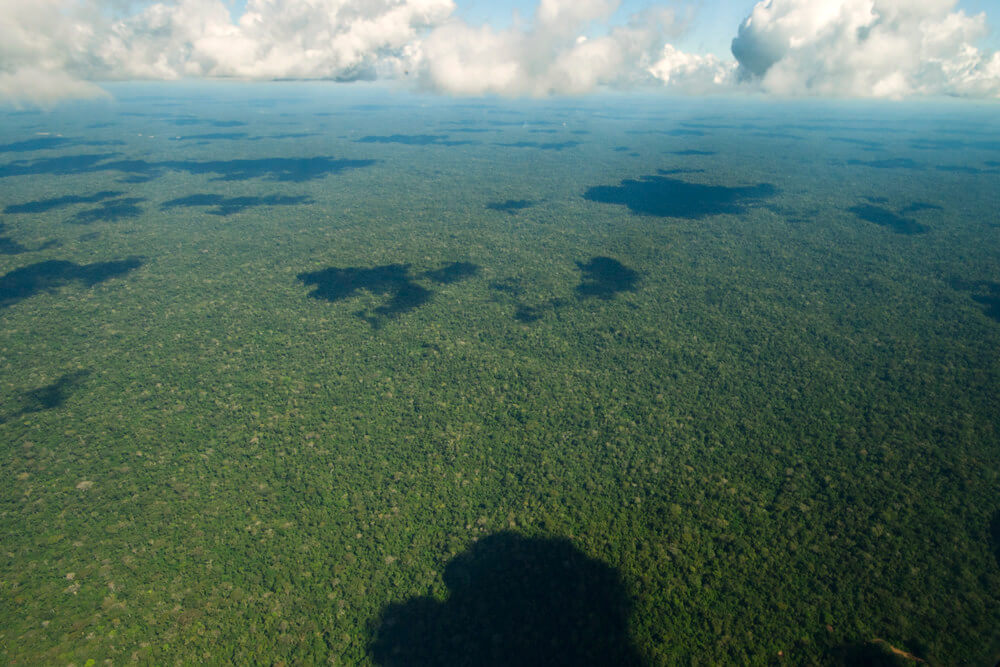 View above the amazon (Photo: Toni Fish/flckr. Some Rights Reserved)
Support our journalism. Become a Patron!

For most Peruvians it was a Sunday like any other; but in the Wampis community of Soledad, it was a historic day. On November 29, the Wampis nation declared the formation of the first Autonomous Indigenous Government in Peru.

Spanning a 1.3 million hectare territory – a region the size of the State of Connecticut – the newly elected government brings together 100 Wampis communities representing some 10,613 people who continue to live a traditional subsistence way of life through hunting, fishing and small scale agriculture.

While the newly-formed government does not seek independence from Peru, its main role is to protect Wampis ancestral territory and promote a sustainable way of life that prioritizes well-being, food security and a healthy harmonious existence with the natural world.

This is no small task in today’s world; but it is nonetheless a necessary one, as Andres Noningo Sesen, Waimaku (Wampis Visionary), explains in a recent email to the New Internationalist. Due to the advance of mining and oil companies, illegal logging and palm oil plantations, the Wampis have found their livelihoods increasingly under threat.

We will still be Peruvian citizens but now we will have our own government responsible for our own territory. This will allow us to defend our forests from the threats of logging, mining, oil and gas and mega dams. As every year goes by these threats grow bigger.

This unity will bring us the political strength we need to explain our vision to the world and to the governments and companies who only see the gold and oil in our rivers and forests. For them, too often we are like a small insect who they want to squash. Any activity planned in our territory that will affect us will now have to be decided by our own government which represents all our communities.

The new Government consists of a President, Vice-President and an 80-member parliament with members elected by each Wampis community through their own local assemblies. Eventually, it will have 102 members. The basis for governance is the Statute of the Autonomous Territorial Government of the Wampis Nation, the result of a long process that took place over several years with the Wampis nation holding over 50 community meetings and 15 general assemblies to develop and debate the Statute which lays out their vision for the future in all areas of life including religion, spirituality, education, language and recovery of ancestral place names.

The Statute places special emphasis on the rights of women stating,

The Wampis nation will work to achieve true gender equality. The Government will work at all levels to promote a campaign to end all forms of violence against Wampis women… respect for women and unity takes precedence over cultural practices, specifically polygamy which took places in other historical contexts and which today can lead to social conflicts… The Wampis Government will prioritize access to third level education for women in different universities throughout the country.

The Statute also emphasizes the obligations of the Peruvian state to respect the rights and autonomy of indigenous peoples and nations. Amongst other principles, the Statute requires that any activity that could affect Wampis territory must secure the Free, Prior and Informed Consent of the Wampis nation. Specifically, this means that the Government of Peru cannot give out any further concessions that allow oil or mining companies to enter Wampis territory without a prior consultation process.

Currently, the Wampis are in the process of resisting such a concession that was granted, amongst others, to Afrodita S.A. for gold mining activities in a bi-national protected area along the border area with Ecuador. Since 2001, Afrodita has maintained a presence in this part of the Peruvian Amazon and in 2010 had its license suspended in the region of Cordillera del Cóndor due to the sustained resistance of indigenous communities living along the Cenpea and Maraño rivers. Both rivers suffered from severe mercury and cyanide stemming from mining activities in the region.

This, according to the newly elected Pamuk (first President) Wrays Pérez Ramirez, will be the largest challenge for the Autonomous Territorial Government of the Wampis Nation. The new president told Intercontinental Cry by phone:

We know that it will be difficult to get the National Government to support us and recognize our territory. It will seem unacceptable to the Government to have to consult us regarding any activity that could affect our territory. We know that it is going to be hard work but we are prepared. We are not going to stay silent not least when we have legal backing from national and international legislation regarding our right to self-determination and free, prior and informed consent. It will be difficult, but not impossible.

“The election has not taken place behind the Government’s back,” he adds. “The Governors of Amazonas and Loreto Province were invited to the summit as well as the Minister for Environment, Energy and Mining and the Minister for Culture but none attended. At the local level we have support and will work closely with, amongst others, the mayors of Rio Santiago and Morona who agree with our decision.”

The historic decision of the Wampis nation will be a source of inspiration for indigenous nations throughout Latin America. As a model for sustainable development and the preservation of some of our last remaining forests, it should also inspire world leaders as they meet at the COP21 Climate Summit in Paris this week.

“While the Peruvian government and other governments are in Paris talking about how to protect tropical forests and reduce contamination, we are taking concrete actions in our territory to contribute to this global goal,” says the newly elected Pamuk.