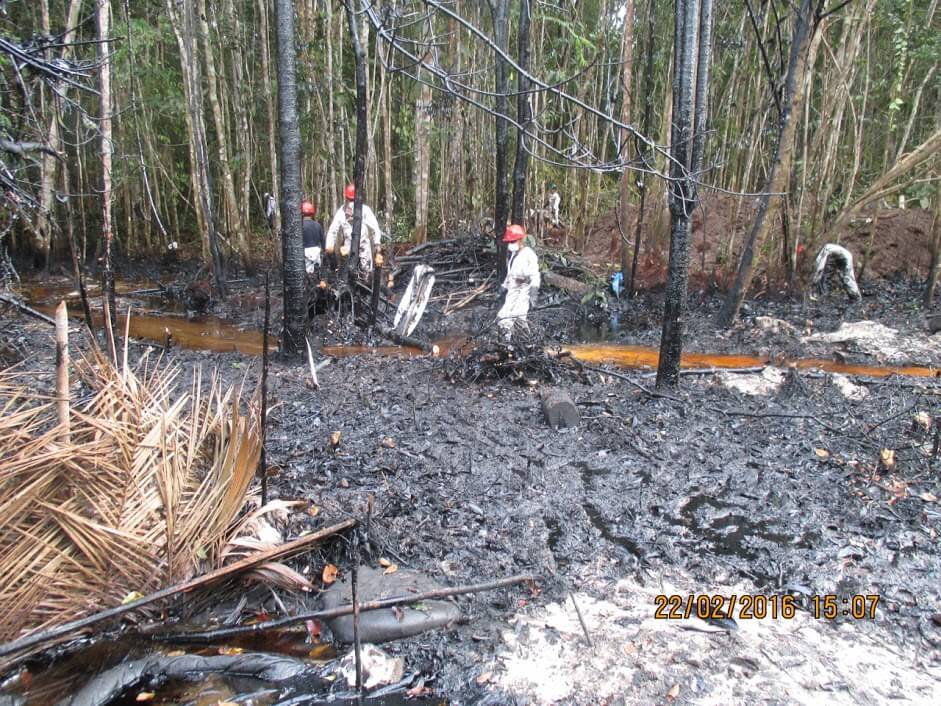 Community demands immediate suspension of pipeline use
Support our journalism. Become a Patron!

London, March 2nd 2016: On the 18th February 2016 the autonomous territorial government of the indigenous Wampis people (Wampis GTA) submitted a formal complaint to Peru’s regulatory body for the environment (OEFA) accusing the state oil company (Petroperú) of gross negligence for its failure to prevent and contain the oil spill in the Wampis community of Mayuriaga. As a preventative measure the Wampis GTA demand that the pumping of oil along a branch of the pipeline is suspended.

The spill which, according to OEFA reports, occurred on the 3rd of February 2016 affected an area of 400m2 of land immediately adjacent to the pipeline before flowing into the Cashacaño river which itself flows into the river Morona. The reports document contamination along the length and both banks of the Cashacaño river to its confluence with the River Morona from where the spill extended a further 1.5 hours travel downriver (see reports (Spanish only) referred to in Resolución Directoral 012-2016-OEFA/DS of 15th February 2016).

OEFA’s final resolution which also referred to another spill on the river Chiriaco from the same pipeline on the 25th January highlights that “the affected bodies of water and soil support the subsistence livelihood of the native communities and surrounding populations” and that “for this reason both incidents represent a high risk of adverse impact, not only to the Inayo and Cashacaño tributaries and to the Chiraco and Morona rivers but also to the lives and health of those people who live in areas adjacent to these spills”.

In its report OEFA clearly establishes that the cause of these spills “both of which are from the Northern Peruvian pipeline operated by Petroperú… are the result of deterioration of the pipeline… due to failures caused by external corrosion which makes evident that Petroperú is not adopting the necessary measures to prevent spills that have environmental impacts”. OEFA’s damning conclusion is that these spills are “not isolated cases” and have documented 20 failures since April 2011 when OEFA assumed its operations.

The Wampis’ formal complaint to OEFA, which was submitted with the legal and human rights organisation, IDL (Institute of Legal Defence), demands that the regulatory body issue sanctions against Petroperú, provides effective oversight of a robust plan for control and remediation of the spill and ensures that Petroperú provide adequate alternative sources of food and water for affected communities.

Finally, given the shortcomings and incapacity of Petroperú to maintain its own pipeline the Wampis GTA demand the immediate suspension of pumping along the Northern branch of the pipeline as the “only effective measure that could prevent irreparable harm to the environment and harm to the health of neighbouring populations along the Northern Peruvian oil pipeline.”

Wrays Perez Ramirez, recently elected Pamuk or President of the Wampis GTA said that: “This oil spill has already resulted in severe and irreparable harm to the community lands of Mayuriaga and to our collective territory as a people. Responsibility lies squarely with Petroperú who have acted with complete negligence. Over more than 40 years they have failed to maintain and repair their pipeline knowing full well that it needs constant maintenance and replacement every 10-15 years.”

“We, the Wampis, never authorised or gave our consent to the construction of this pipeline in our territory yet we suffer the consequences. This is another example of where we have lost control over our territory which has been subdivided by the State into different village lands or issued as concessions to different companies. It is exactly this kind of problem that our territorial government is trying to address”.

The recently formed Wampis government which was elected by Wampis villages in November 2015 to assume jurisdiction over 1.4 million hectares of their customary land will bring together its almost 100 delegates (Irunin) representing its constituent communities to a summit meeting in the village of Soledad on the river Santiago from the 13th – 19th March 2016.

The Irunin are proposing several measures to address the situation which includes two planned legal resolutions. The first declares the affected area to be in a state of environmental and health emergency while the second annuls all those concessions, infrastructure projects and other state backed initiatives in their territory that have failed to comply with legal requirements to consult with the Wampis and secure their Free, Prior and Informed Consent.

These measures, which form part of the Wampis’ pioneering efforts to safeguard their ancestral lands, will be announced to coincide with the Global Call to Action on Indigenous and Community Land Rights which was launched today by an international coalition and is backed by more than 300 organizations all over the world.