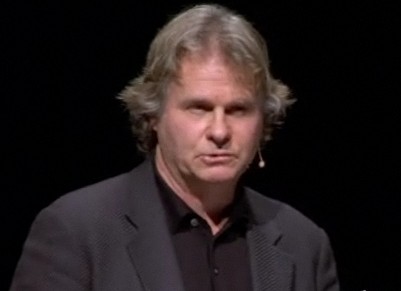 Wade Davis: Why Ancient Wisdom Matters in the Modern World

In this talk, delivered at the Cowell Theatre in San Francisco, California, on January 13, 2010, the respected author and Canadian anthropologist Wade Davis takes us on a journey through the ethnosphere—and reminds us of our own cultural imperative as human beings. The Long Now Foundation‘s latest monthly Seminar, Davis speaks for approx. 1 hour and forty minutes.

Wade Davis is the bestselling author of several books, including The Serpent and the Rainbow, Light at the Edge of the World, and The Clouded Leopard. He is an award-winning anthropologist, ethnobotanist, filmmaker and photographer, and his writing and photographs have been widely published. Davis currently holds the post of National Geographic Explorer in Residence, and divides his time between Washington, D.C. and northern British Columbia.

In 2009, Davis took part in the Massey Lecture series, delivering talks in five cities across Canada. All the talk have been collected into a book, The Wayfinders: Why Ancient Wisdom Matters in the Modern World..

This recent talk, which you can, alternatively, watch or download at fora.tv is based on all five lectures.

The CBC Massey Lectures 2009 — The Wayfinders is a profound celebration of the wonder of human genius and spirit as brought into being by culture.

Of the 7,000 languages spoken today, fully half may disappear in our lifetimes. This does not have to happen. The other cultures of the world are not failed attempts to be modern, failed attempts to be us. Each is a unique and profound answer to a fundamental question: What does it mean to be human and alive? When asked that question the peoples of the world respond with 7,000 sources of knowledge and wisdom, history and intuition which collectively comprise humanity’s repertoire for dealing with all the challenges that we’ll face as a species in the coming centuries. Every culture deserves a place at the council of the human experience.

In The Wayfinders anthropologist and National Geographic Explorer-in-Residence Wade Davis reveals the significance of what may be lost through a wild and thrilling exploration of what remains with us and very much alive. Travel to Polynesia and celebrate the art of navigation that allowed the Wayfinders to infuse the entire Pacific Ocean with their imagination and genius. In the Amazon await the descendants of a true Lost Civilization, the People of the Anaconda, a complex of cultures inspired by mythological ancestors who even today dictate how humans must live in the forest. In the Andean Cordillera and the mountains of the Sierra Nevada de Santa Marta of Colombia discover that the Earth really is alive, pulsing, responsive in a thousand ways to the spiritual readiness of humankind. Dreamtime and the Songlines will lead to the melaleuca forests of Arnhem Land, and an understanding the subtle philosophy of the first humans to walk out of Africa, the Aboriginal peoples of Australia. In Nepal a stone path leads to a door opening to reveal the radiant face of a wisdom hero, a Bodhisattva, Tsetsam Ani, a Buddhist nun who forty-five years ago entered lifelong retreat. The flight of a hornbill, like a cursive script of nature, will let us know that we have arrived at last amongst the nomadic Penan in the upland forests of Borneo.

What ultimately we will discover on this journey will be our mission for the next century. There is a fire burning over the Earth, taking with it plants and animals, ancient skills and visionary wisdom. At risk is a vast archive of knowledge and expertise, a catalogue of the imagination, an oral and written language composed of the memories of countless elders and healers, warriors, farmers, fishermen, midwives, poets, and saints. In short, the artistic, intellectual, and spiritual expression of the full complexity and diversity of the human experience. Quelling this flame, and rediscovering a new appreciation for the diversity of the human spirit as expressed by culture, is among the central challenges of our times.