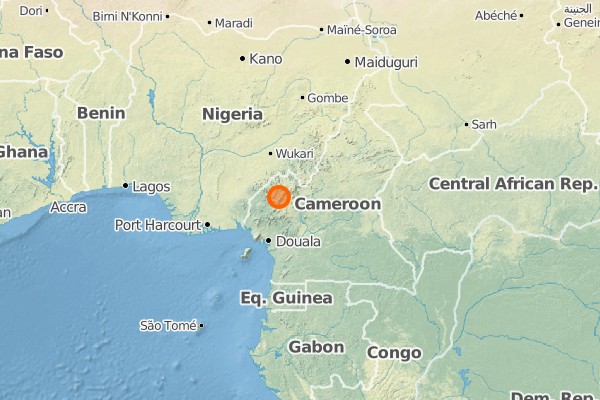 According to eye-witnesses, on Wednesday, 19th March 2014, the Catholic Church led by Njobain Cosmas, Manager of Landed Properties for the Bamenda Archdiocese, directed a bulldozer and a group of hired militias to demolish the homes of the Mbororo of Banjah, Bamenda (also known as Mamada Hills, Wumse–Ndzah). The incident followed an eviction notice issued by Divisional Officer Bamenda III (Tarkang Walters Ashu) one week earlier which cleared the way for the premeditated and well planned illegal violent attack. The community mobilized at short notice and were successful in stopping the demolition from going ahead. They demobilized the bulldozer hired by the invaders for demolition.

According to lawyers for the Banjah community, the violent invasion took place despite a court case pending in the Bamenda Administrative Court with a Stay of Execution of the Order on the now-disputed land. A Judge served the Archbishop of Bamenda reminding him of the pending case. Despite being alerted to the impending invasion the government officials did nothing to stop it from going ahead in complete violation of the law. By demolishing homes of Bambili people and issuing eviction notices to the Mbororo despite pending legal action the government officials actually gave clearance for the attack. What’s more, there’s a high probability that North-West Governor Adolphe Lele Lafrique and Mezam Senior Divisional Officer Nguelle Nguelle Felix gave their approval for the illegal violent invasion; Cameroon government administrators do not act on such matters without approval from their superiors.

Neighbouring Bambili and Banjah farming communities joined the Mbororo of Banjah to resist the violent demolitions. In May 2013, Senior Divisional Officer Nguelle Nguelle Felix personally led an illegal demolition of Bambili homes in an attempt to provide alternative resettlement land for the Mbororo of Banjah. The disputed Bambili lands are not appropriate, safe or conducive for any resettlement.

Last week’s illegal violent invasion by the Catholic Church of the indigenous minority community of Banjah resulted in several injuries and needless damage to property. One of those injured was Fon Christopher Achobang, a land rights campaigner and journalist who went to the scene to cover the incident. He is presently receiving medical attention. Police were called to the scene after the incident but no one was arrested even though the Catholic authorities brought in large numbers of what was termed ‘anti-balaka’ type militias who arrived on motor bikes and in car-loads to attack the peaceful Muslim Mbororo herders. This is a dangerous precedence going forward.

The Mbororo settled in Banjah in 1904 and were issued a Certificate of Occupancy of the Land by the British Colonial authorities in 1933, nearly 3 decades before Cameroon gained independence. The present community leader Banjah, Ardo Adamu Bi Mamada, was appointed on 26 August 1964.

Justice and Dignity Campaigns condemns this illegal invasion and needless violence and holds the Catholic Church and the government of Cameroon to account for any injuries, potential loss of life and property. The Campaign calls on the government to stop the illegal invasion and compensate all those who suffered damages in accordance with Cameroonian and international laws.