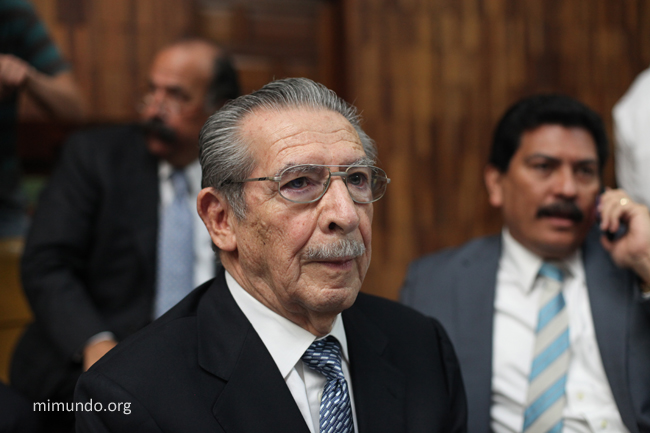 Efrain Rios Montt, on the 26th day of the historic Genocide trial (Photo: mimundo.org)
Support our journalism. Become a Patron!

I can’t help but wonder what they must have felt, trapped in the Spanish embassy, as they died in the fire. I can’t but wonder what the people outside thought. The victims of this terrible act of violence were Ixil and K’iche Maya peasants from the Comité de Unidad Campesina [CUC] and a group of students.

They wanted the government to stop their genocidal push for control, directed mostly at the indigenous people. It was January 31 1980, a shameful day for the Guatemalan government that opted for murder, instead of dialogue.

Last week, on the thirty-fourth anniversary of the massacre, Prensa Comunitaria wrote about new efforts to make justice possible in Guatemala. Not just for the people who were burned alive in the Spanish embassy, but for all the victims of the Guatemalan genocide, those who died and those who survived.

We call for the creation of a support network for the victims, to give them safety. It’s necessary to accompany them until the sentence is applied

says Marta Casaús, a Guatemalan sociologist who testified as an expert at Efrain Rios-Montt’s trial.

This is the beginning of a series of actions

says Mercedes Ruiz-Giménez Aguilar, the president of an NGO network from Spain.

This is all the more important because the Guatemalan violence is not entirely a thing of the past. Far from it. The trial of former dictator Rios-Montt was revoked citing “errors of procedure”, and the new judicial process seems to be facing an uphill battle.

In the time around the first trial, many women were raped in an attempt to stop them from testifying about their torture and sexual abuse during the genocide. There has been at least one intimidation attempt directed at indigenous communities since Rios-Montt’s conviction was revoked.

since 2011, the Association of Military Veterans of Guatemala, Avemilgua, has said it’s ready to take up weapons again.

Violence in Guatemala is not just limited to the Rios-Montt trial. There’s the case of Kaqchikel Maya leader Juan Tuyuc, a former guerrilla commander and a promoter of development projects in indigenous communities, who was brutally murdered last January. Two days later, despite the fact that Tuyuc’s body showed signs of a beating and gunshot wounds, the authorities reportedly claimed he had been hit by a car.

And there’s the case of Arturo Pablo, Adalberto Villatoro y Francisco Juan, three community leaders from Barillas who were arrested on January 23 after a Spanish hydroelectric company brought up charges against them. The company, Ecoener Hidralia Energía—Hidro Santa Cruz, is looking to set up shop in Santa Cruz Barillas, department of Huehuetenango, with the support of the government and in spite of widespread grassroots resistance. The case against the three Barillas leaders, who are part of the opposition to the hydroelectric, is another chapter in a long story of persecution and criminalization of the people involved in the resistance movement.

These are just two examples. There’s many more. They teach us that violence against indigenous people and other civilians in Guatemala continues to run rampant, and that few, if any, of the victimizers are ever made to answer for their crimes. On this anniversary of the massacre at the Spanish embassy in Guatemala, we should all say this to the Guatemalan government: Justice must be done. Indigenous and other communities in Guatemala have the right to choose what they want for their land and for themselves, without being threatened, tortured or killed. That right must be recognized, and those who breach it must be held accountable.