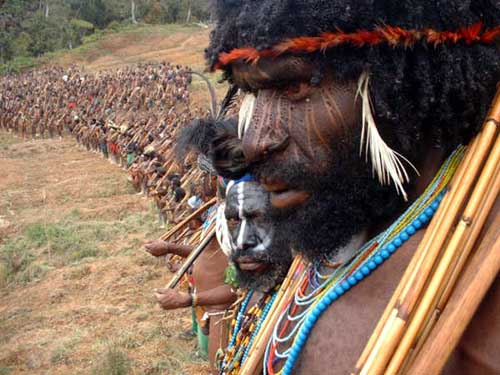 Reports have recently come out of West Papua that indigenous people from the Muyu tribe have clashed with employees of Korindo, the Korean and Indonesian owned logging and oil palm company—resulting in the destruction of four Korindo company trucks, and the death of atleast one local Papuan.

According to the Institute for Papuan Advocacy, “The military have reportedly accused the OPM/TPN guerrillas of the attacks” and is apparently using this as a pretext for further action against local Papupans.

“The recent violence reported at the Korindo operation appears to be as a result of longstanding dispute over land rights between Korindo and local indigenous traditional landowners, not just the Muyu but also the Auyu, Mandobo, and Marind from other parts of southern West Papua who are also effected by Korindo’s operations. In addition there has been a very long history of violence by Indonesian security forces in this region. At times the TNI (Indonesian military) and police work to protect Korindo’s interests and at other times they have launched brutal and indiscriminate military operations against the civilian population and small bands of West Papuan guerrilla fighters.”

Another report from the end of July revealed that the elite force of Indonesian Special Military Reserve carried out a brutal torture of a local man Yakabus Gimbanop. He was taken to hospital, but his injuries were so severe that he was not expected to recover. And then Yakobus ‘disappeared’ from the hospital…

This is one of several recent military acts of violencecommitted against the People of West Papua, in what is been viewed as a return to the Suharto era style of repression. Spokesperson for the Institute for Papuan Advocacy & Human Rights, Matthew Jamieson says,

“The information coming to us signals that the human rights situation in West Papua is deteriorating fast. In the past two months there has been increased threats to human rights defenders, reports of militia being formed in regional centers, torture of Papuan activists at the hands of security forces, a report of the killing by Police of three public servants in the Star Mountains region, and shootings of Papuans by military personnel in Jayapura and the case of the server torture of a man by military near Tanah Merah.”

Further information
Please visit www.infopapua.org, and www.freewestpapua.org. See here for actions you can take to support the struggles of the People.