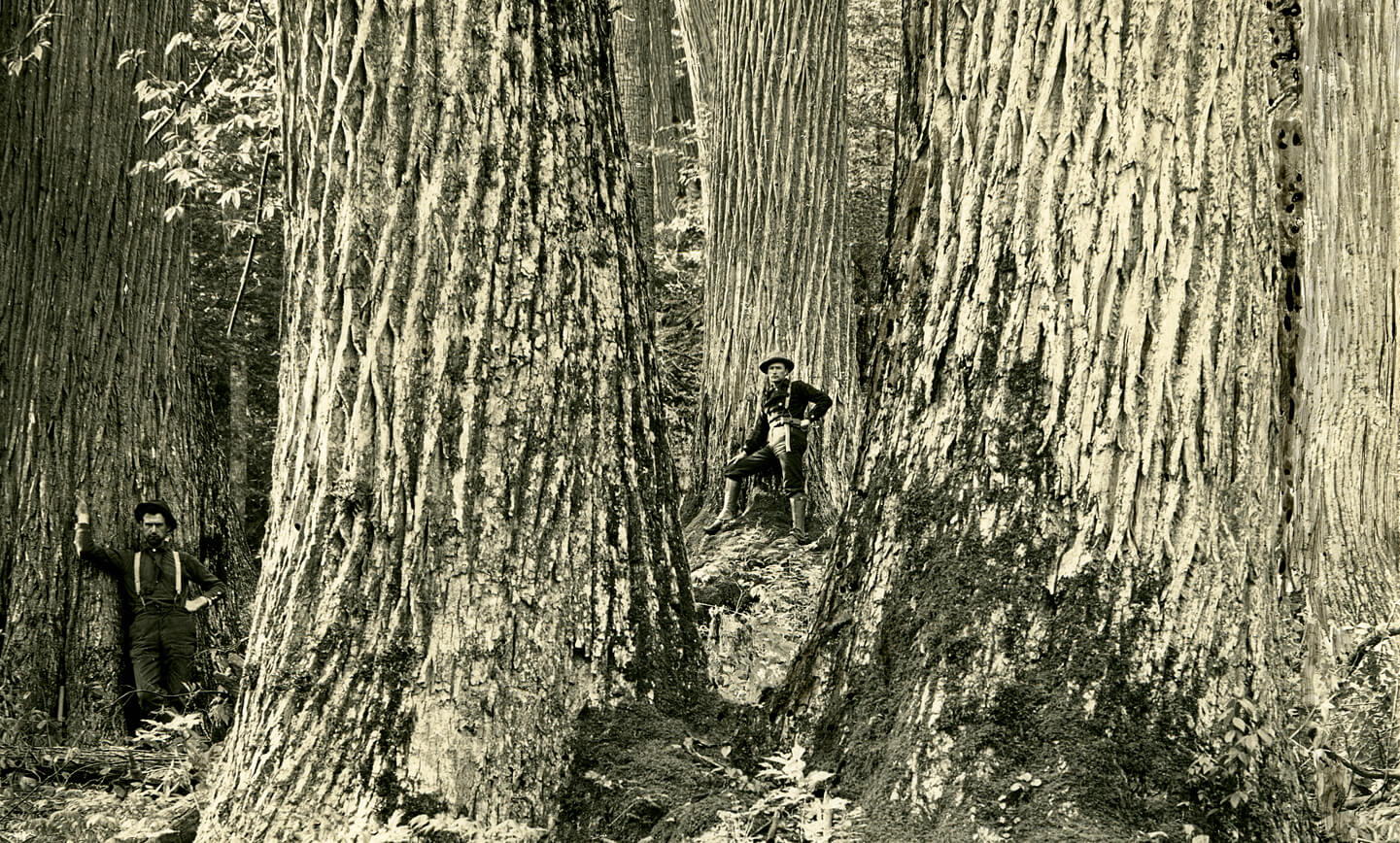 Violating the Sacred: GMO Chestnuts for the Holidays?

Genetic engineering is no gift to future generations and will be the death knell of delicate and essential biodiversity of which all life on Mother Earth depends.
The American Chestnut giants were known as the sequoias of the east.
Support our journalism. Become a Patron!

“Chestnuts roasting on an open fire, Jack Frost nipping at your nose…” We don’t even have to provide the score for you to hear this song clearly in your head. “The Christmas Song” written in 1945 by Bob Wells and Mel Tormé is a classic. However, by that time in history, the American chestnut (Castanea dentata) trees had almost completely vanished. They had fallen victim to an airborne fungus introduced by the import of an ornamental chestnut from Japan.

This was an epic loss. Before Europeans clearcut huge swaths of eastern woodland forests, chestnut saplings and large sheets of bark were used to build naturally strong and weather resistant Longhouses for the Haudenasaunee and many other tribes. And in most cases, it was done without killing the trees. The leaves provided medicine for countless generations who lived up and down the eastern seaboard. The nuts were ground into flour, boiled, and eaten raw.

But American chestnut trees were quickly targeted as the wood of choice beginning with the first boat-load of immigrants. They dominated the forests of the New World and were felled to build ships, settlements, and furniture. Huge beams were cut for dwellings of all sizes. The wood was dense, naturally rot resistant, and prized by woodworkers across the North American continent. The nuts were roasted and ground into flour for cakes, puddings, and breads.

Today, chestnuts are still a staple during the holidays and winter months, and the majority of these come from European or Chinese stock.

There is no question why decades of dedicated and extensive research has been done to return the American chestnut  to the forests it once dominated. The most promising to date has been the conventional breeding techniques done to combine the disease resistance of a Chinese variety with surviving American chestnut trees to produce a hybrid that will be unaffected by the airborne fungus that still lives on other tree species.

But is our meddling risking further damage to already fragile ecosystems that have since compensated for the loss of the American chestnut tree? And how should we go about reintroducing it? Conventional wisdom would indicate that any reintroduction in a natural setting should be done slowly, with changes monitored closely, outcomes assessed, with contingency plans in place to quickly address any negative consequences.

Once researchers have a resistant chestnut, the question is where to plant it. Forest ecosystems have transformed in the past century, and reintroducing the chestnut could upset the new ecological balance. “You can’t assume that a forest with chestnut is better than a forest without. You can’t roll the clock back. Steve Hamburg, chief scientist at the Environmental Defense Fund in Boston, Nature.com

The development of a hardy 100% American chestnut backcross has also shown promise, but conventional breeding takes time, time that geneticists claim we don’t have. But rushing this delicate and complex process in order to begin the reintroduction of this once king of the forest is classic human hubris.

Learn From Our Mistakes?

It was, in the early years, the rush to salvage-log the wood from an estimated 3-million American chestnut trees, whether they were sick or not, that may have unwittingly destroyed trees resistant to the fungus. If more time was taken or even possible to assess the situation, we might have avoided the near loss of these trees. Young American chestnuts remain scattered throughout the forests of the east, though few make it to maturity. These are the ones that researchers from the State University of New York College of Environmental Science and Forestry (SUNY/ESF) will be cross pollinating (contaminating) with their genetically engineered (GE) version.

Deregulation of the GE American Chestnut

William Powell, lead American chestnut scientist at SUNY/ESF recently announced his team is almost ready to apply for Federal deregulation to allow them to distribute their GE trees, free of charge, in hopes they will be planted in great numbers. Some of these GE trees, modified with a wheat gene, will be planted near surviving disease resistant non-GMO American chestnut trees. The goal is for the GE tree to cross pollinate with the others and create the next generations of disease-resistant offspring.

Powell and his team hope that the government agencies charged with reviewing their research results will modify the process to make it much easier to obtain permission to release novel GMOs like their GE chestnut. And with government agencies now managed by anti-regulation leadership coming directly from industry boardrooms and research facilities, chances are good that requirements for scientific review or public input will greatly diminish– at our peril.

Powell and his team, along with researchers from North Carolina State University, have spent considerable time with stakeholders from the Oneida Nation in New York State. They, along with their brother nations of the Haudenasaunee, hold vast swaths of eastern woodland areas where a majority of the wheat-altered GE chestnuts could be planted. Support for this plan has been mixed. Traditional elders remind us that communication with these natural entities is a key element in medicinal efficacy. By changing its genetic makeup it is a totally different and foreign organism. Tom Goldtooth, an elder and executive director of the Indigenous Environmental Network has said that GE trees have no soul.  Others, however, are cautiously optimistic and are taking a wait and see approach.

When we look at genetically modified organisms, and we we look at genetically engineered trees a lot of our people say there’s really no life to that tree, there’s no spirit to that tree, it’s already been corrupted and it effects on whether you use parts of that tree – you know how can that sustain the vital life cycle of mother earth itself and that’s our message we’re trying to give as Indigenous Peoples.
Tom BK Goldtooth, Executive Director, IEN

Deregulation of this tree could very well become the first step to public acceptance of other GE trees. But the deployment of any GE trees conveys a  great risk for the destruction of biodiversity wherever GE trees are grown. Whether planted willy-nilly in the forest with no controls, as in the plan to reintroduce the American chestnut or in vast, water-intensive industrial plantations, like ArborGen’s GE freeze-tolerant eucalyptus trees are predicted to cause great harm.

Under the guise of protecting remaining natural forests, biotech and related industries are running public misinformation campaigns that make ambitious and largely false claims. Proposals include the biological manipulation of trees and forest fauna to combat the damaging effects of disease, drought, and related symptoms of climate change. Large regions of the country are witnessing widespread die-offs of oaks, ash, and hemlock from non-native pests and microorganisms. Diseases we could have avoided if not for an ever-expanding system of economic globalization that embraces trade in whole logs and wood chips.

So, I put this word commercialization in there, and I’ve kind of already…spilled the beans, gee this isn’t just about restoration anymore, you think maybe you could get a lot more trees planted if landowners said ‘hey I’d like to plant about you know, 10,000 chestnuts trees on my property,’ well that’s not just restoration anymore, that is commercialization because eventually people are gonna want to plant chestnuts for timber and for nuts.” Scott Merkle, University of Georgia Professor of Forest Biotechnology

Millions of acres of tropical and subtropical forests and rainforests in the global south have been and continue to be destroyed. Tree plantations are rapidly replacing these primeval forests. These plantations are harvested every 5 to 7 years for wood chips, pulp or charcoal. They are doused in toxic agrochemicals to control pests and competing vegetation–risking human health and polluting groundwater, streams and rivers. Could this be the real future of “restoring” the GE American Chestnut?

Genetically engineered trees haven’t been properly studied and by inserting these foreign trees into an ecosystem we risk unwanted and unpredictable damage to plants, insects, animals, soils, water, and the foundational bacterial and fungal organisms that create a healthy ecosystem.

In regard to the GE American chestnut, it is possible that they will live for centuries like their wild predecessors. During a tree’s life cycle they produce pollen year after year that can travel for miles, via wind and pollinators, and seeds (nuts) that are distributed unchecked across a wide area. Genes activate and deactivate in response to environmental stresses leading to unpredictable consequences.  Besides which, there have been no long-term studies on the effects on humans or animals consuming the GE chestnuts–not to mention what happens when GE American chestnuts contaminate existing non-GE and organic chestnut orchards.

The process of inserting foreign DNA into an organism, or even non-transgenic genetic manipulations like CRISPR, causes permanent damage to the genome that leads to unanticipated and unpredictable mutations which have unanticipated and unpredictable impacts on the delicate web of biodiversity in forest ecosystems. All the studies on GE chestnut should be made widely available so the public can see for themselves what is and is not being taken into consideration regarding the release of GE trees into the environment. Already the Earth is suffering the effects of unchecked climate change.  Why should  we add to the risk the future collapse of natural systems that have sustained life on this planet because of ill-advised meddling with tree genomes? We must subscribe to the tenets of the Precautionary Principle when it comes to risking irreversible damage to what we barely understand to begin with.