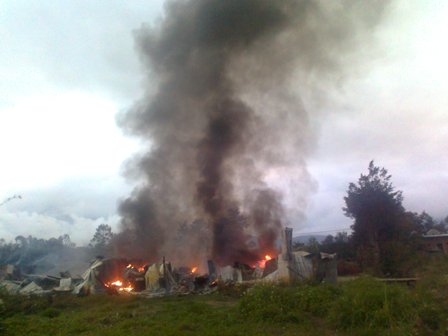 A series of videos uploaded to the internet reveal the path of destruction left by Indonesian soldiers on June 6, 2012. According to reports, soldiers from Indonesian Army (TNI) Battalion 756 went on a rampage after local villagers killed one soldier and severely injured another. The two soldiers had run over a 3 year-old child that was playing by the roadside, in the village of Honelama in Wamena.

“In retaliation, two trucks of soldiers from army battalion Yonif 756/Wamena arrived at Honelama village not long after and reportedly opened fire arbitrarily on the village killing one person, Elinus Yoman. According to reliable local sources, soldiers also stabbed around a dozen people with their bayonets. In addition, soldiers reportedly burned down dozens of homes, buildings and vehicles during the attack. Many of the villagers have fled the area and are afraid to return to their homes,” says Amnesty International.

At least 9 people have died as a result of the attack, 19 more sustained serious injuries, and thousands were made homeless.

Adds West Papua Media, “Human rights workers in Wamena have identified a number of victims so far, but they report there are still many victims to be identified, with military and police personnel blockading the hospital to prevent relatives access to those who sustained injuries. This policy is causing great concern from local people that Indonesian security forces are committing further human rights abuses at the hospital in Wamena on survivors of the rampage.”

“According to fresh but separate unconfirmed reports received by West Papua Media, medical staff are being threatened by heavily armed military officers at the hospital, and soldiers and police including Australian-funded Detachment 88 counter-terror officers are directly interfering in the provision of treatment.”

In addition, West Papua Media continues, “over 20 Lani tribespeople have sustained serious injuries from gunshots and beatings during the rampage, though their condition is not yet known at time of publishing.”

More information is being posted as it becomes available, at www.westpapuamedia.info. Additional updates can be found at www.freewestpapua.org