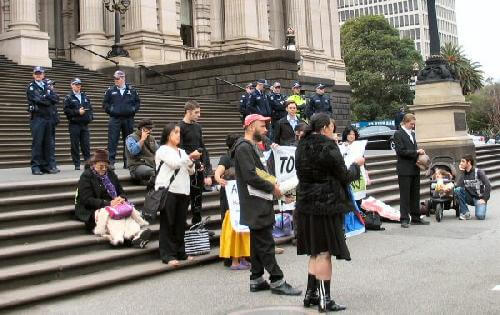 Video statement from May 10 protest of APEC

The following video is part of a speech given at the recent protest against APEC, in Melbourne Australia (info on the protest) Click on the image to view (or watch on youtube) Well said Ana!

From Whenua, Fenua, Enua, Vanua – Occupied Australia is the land of genocide and apartheid for its Indigenous peoples.

The invasion of Aboriginal lands was illegal under international law at the time of the arrival of the First Fleet. This invasion involved the perpetration of war crimes, crimes against humanity, genocide and theft of Aboriginal homelands.

The current contempt and lack of respect rights and third world conditions that Indigenous peoples face in Australia is an International Shame.

As a Maori settler allay of Aboriginal Sovereignty, I refuse to be a silent beneficiary of aboriginal genocide any longer.

Like New Zealand Canada, and the USA, Australia is a colonial settler state, based on invasion, dispossession and colonisation. Its past 25 years of free market fundamentalism must be understood in the context of an ongoing colonial occupation of Aboriginal lands and resources on which the Australian nation-state is based… (source)

Video statement from May 10 protest of APEC

DECLARATION AND POSITION OF INDIGENOUS PEOPLES TO THE MEETING OF THE APEC TRADE MINISTERS, CHILE 4 to 5 JUNE, 2004

APEC, the Asia-Pacific Economic Cooperation created in 1989 as a forum to advance economic cooperation, free trade and investments in the region and which 21 countries have joined, pretends to benefit and improve the living conditions of all citizens in the member countries.

In this regard, we, indigenous peoples and organizations with ancestral rights in these member countries of APEC would like to present some fundamental concerns which affect our future and call your attention to the following recommendations and specific demands of the peoples concerned.

1. We, the indigenous peoples of the countries which form APEC have suffered from the negative impacts of the development of free trade and the accelerated economic cooperation in the context of the so-called globaliyation in various forms; the criteria which guide the agreements of free trade do not take into account nor respect our human rights; we underline, that we are holders of ancestral rights; in the frame of these agreements, we are not consulted nor do we participate in the taking of decisions which have an immediate impact on our lives and collective rights.

3. In particular, we would like to call your attention on Articles 6 and 7 of the ILO Convention Nr. 169 which establish that indigenous peoples and communities affected by a development project or proposal must be consulted in a broad and transparent way and they must participate in the decision-making and at every step of the project or proposal. We believe that this internationally recognized principle and right is not taken into account in the APEC agreements.

4. With regard to our natural resources and traditional knowledge and the rights associated, we would like to draw your attention on the Convention on Biological Diversity which states in Article 8(j) that “ the knowledge, innovations and practices of indigenous and local communities” must be respected, preserved and maintained. Furthermore, Article 10 (c) of the same Convention calls for the protection and continuation of the customary use of biological resources, in accordance with traditional cultural practices.

5. We are calling on the members of APEC to recognize the elemental norms of the human rights of indigenous peoples; particularly those countries which have not ratified ILO Convention 169 and which furthermore do not have a policy on/with indigenous peoples.

6. We stress to the members of APEC that the lack of the right to full and effective participation of indigenous peoples, is contrary to democracy and does not provide security in peaceful co-existence.