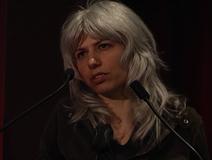 In the following presentation, Claudia Magallanes-Blanco from the University of Western Sydney talks about the role of video activism as a world-wide tool for empowerment and the Chiapas Media Project, a collaborative effort based in Mexico that provides indigenous Zapatistas in Chiapas and peasants in Guerrero with training and equipment to produce their own videos.

Since forming in 1998, CMP has distributed over 6000 videos, including: Zapata’s Garden, a film that looks at the society the Zapatista’s are building; Reclaiming Justice: Guerrero’s Indigenous Community Police, which tells the story of 42 Mixteco and Tlapaneco communities in Guerrero, who, in 1995, established the Indigenous Community Police (ICP) based on their traditional indigenous justice system; and Women United (Mujeres Unidas), which promotes the value of collectives, spotlighting the work of an indigenous women’s collective in the autonomous municipality of 17 de Noviembre (November 17), Chiapas, Mexico.

Following Claudia’s presentation, Alexandra Halkin, founding Director of the Chiapas Media Project, will talk about the origins of the CMP, as well as the role of locally-produced alternative media in the current situations in Chiapas and Guerrero.