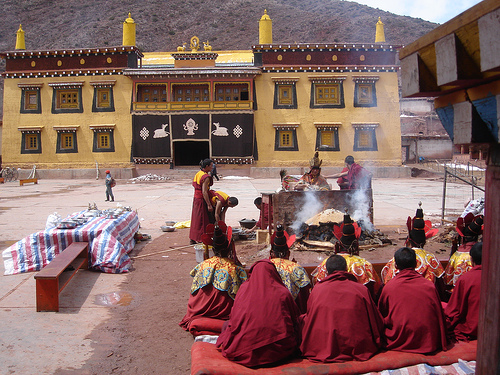 In a rare and surprising turn of events, Chinese authorities have come to an agreement with Tibetan villagers over a proposed gold mine in Mangkang county, occupied Tibet.

The villagers have been protesting the mine since last April, out of concern that the mine would destroy a site they hold sacred. There was a tense standoff on the road leading to the site last month.

On May 16 as many as 500 Tibetans gathered on the road soon after “a contingent of police and security forces arrived” to make way for the Zhongkai Company, who previously gained authorization from the government to go ahead with the mine.

During the standoff, Villagers reported that all cellphones and landlines were blocked and the protesters were cut off from the rest of the village.

Police forces also declared that they would “force their way through” to get to the mine if the Tibetans wouldn’t back down. However, the villagers stood firm, vowing to sacrifice themselves to protect the sacred site. The standoff lasted for several days.

Thankfully, that’s all in the past now. According to a June 9 report by Radio Free Asia (RFA), both sides agreed on Monday that the mining operation would not go ahead.

“It was agreed in writing that there will be no mining in the area,” explains one local Tibetan man, who spoke on the condition of anonymity.

Chinese security forces currently deployed in the area will also be withdrawn and the Tibetans will “return to their respective areas,” he adds.

Chinese authorities further agreed to build a concrete barrier “to block the poisonous residue of earlier mining in the area so that this will not filter down into the drinking water.”

RFA contacted a local security official who confirmed that a settlement had indeed been reached. “The issue of mining in the area has been resolved, and the area is quiet,” the official said.

There is still one point of disagreement, however, on the handling of the waste currently at the mine. The official continues, “The government has offered to clean the whole area, but the Tibetans want to hold [the residue] as evidence. So it was decided that the Tibetans will hire a professional group from China to examine it, and the government will assign the TAR Environmental Protection Department to carry out its own examination.”

Given China’s abominable desire to colonize and ransack Tibet of its resources, it remains to be seen whether China will hold true to its word and respect this agreement.

If they do, then it’s cause for celebration and applause from all of us around the world.