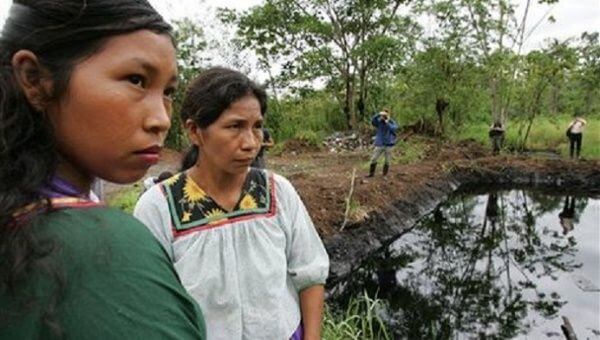 Cofan indigenous Women from Ecuador at the foot of the water body that shows the ecological destruction by the oil company.. | Photo: EFE
Support our journalism. Become a Patron!

Ecuador’s Indigenous groups will no longer have to cough up US$1 million on legal fees that Chevron, the oil giant, had earlier claimed from the groups, Ontario’s top court has ruled.

The court dismissed Chevron’s claim to legal fees, saying it was a recourse to block the case.

“An order for security for costs should only be made where the justness of the case demands it,” the Appeal Court said. “Courts must be vigilant to ensure an order that is designed to be protective in nature is not used as a litigation tactic to prevent a case from being heard on its merits.”

“Chevron Corp and Chevron Canada have annual gross revenues in the billions of dollars. It is difficult to believe that either of these two corporations, which form part of a global conglomerate with approximately 1,500 subsidiaries, require protection for costs awards that amount or could amount to a minuscule fraction of their revenues,” the court added in a statement.

The decision marks an important victory for the Indigenous Peoples in the region, as they can now continue with their 5-year fight seeking US$9.5 billion for decades-long damage caused to their ancestral lands and trauma caused to the inhabitants.

“We are thrilled Canadian courts denied this naked attempt by Chevron to block justice to the affected peoples of Ecuador,” Luis Yanza, a Goldman Prize winner representing the Defense Front of the Amazon, an Ecuador-based nonprofit that spearheaded the case, said.

Ecuador’s Indigenous groups first filed the case against the oil conglomerate in 1993, Patricio Salazar, the lead Ecuadorian lawyer for the plaintiffs, said. “This decision by the Ontario Court of Appeal is critically important,” Salazar said. “Twenty-four years obviously is too long for any litigation, but especially one involving severe harm to indigenous groups as a result of environmental pollution.”

“This decision by the Ontario Court of Appeal is critically important,” Salazar added. “Twenty-four years obviously is too long for any litigation, but especially one involving severe harm to indigenous groups as a result of environmental pollution.”

Chevron is known for causing an “Amazon Chernobyl” with the oil behemoth dumping billions of gallons of toxic waste into the rainforest and water bodies that severely impacted the Indigenous Peoples in the region, even causing a cancer epidemic, where many communities saw their families decimated.

Chevron lost the case against the Indigenous communities in Ecuador in 2013, but rejected the court’s ruling, further selling off its assets in the Latin American country. But the Indigenous communities continued to fight for their rights and the damages caused, taking their fight to the Canadian court. The Canadian top court, too, ruled against Chevron once in 2015 but the oil giant made several claims rejecting the ruling, saying the court had no jurisdiction.

This article was originally published on teleSUR. It has been re-published with permission.