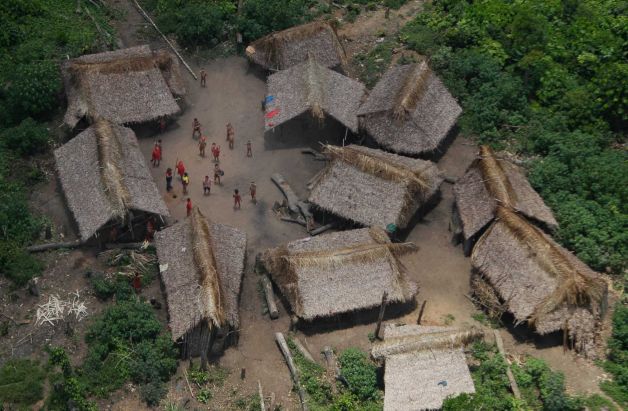 A little under two weeks ago, we received reports that the Yanomami village of Irotatheri in southern Venezuela had been decimated by unknown persons, presumably illegal gold miners from Brazil. Those reports came from firsthand sources through HORONAMI, a well-known Yanonami organization in Venezuela.

After gathering as much information as it could, HORONAMI released a statement to the public which outlined what they had been told, that an entire village had been destroyed from their air, and what the government of Venezuela and Brazil should do in response.

Following that release of information, the UK organization Survival International issued an alert of its own.

Not long after that, a string of stories were published by the BBC, the New York Times, Associated Press and many other corporate and alternative news providers, including Intercontinental Cry.

While these stories were being published, local indigenous organizations in Venezuela, fearing the worst, pressured authorities to carry out a formal investigation.

On August 29th, the government announced that it was setting up a formal commission to do just that. Two days later the government-appointed team began to scour the rainforest from the air. One day after that, they went home, satisfied that nothing happened.

Venezuela then issued an official response in which it denied that a massacre had taken place and that the story was nothing more than a media fabrication aimed at causing ‘uncertainty’ in the country.

Given that Venezuela (under President Hugo Chavez) is a favored punching bag for the United States, it was a possibility. However, the media did not ‘make’ anything. As noted earlier, they were merely reporting on what little information HORONAMI released to the public.

Was it enough to run the story? Yes it was. Though it is very unfortunate how few actually bothered to talk to the Yanomami or truly investigate the situation for that matter. Dan Rather was not on the scene.

Local indigenous organizations, disturbed by the government’s weak investigation–which did not appear to confirm anything–continued pressuring the government to prove whether or not there was a massacre at Irotatheri.

This past weekend, the government gave in to their demands and, putting aside earlier statements sent a mission to the village consisting of military officers, a doctor and some journalists.

As a result of that mission, we can now say with relative certainty that the Yanomami are safe and sound. As reported by AP, when the group arrived, the Yanomami were chillin’ out like it was just another day in the rainforest. There were no signs of any kind that a massacre had taken place.

We’re more than a little relieved to hear that, especially given the sharp rise of violence against Indigenous Peoples in recent months. Paramilitary groups, vigilantes, security personnel, hired guns, even entire battalions are lashing out from Brazil to Honduras to India to West Papua. It’s the same thing everywhere.

Of course, we are equally grateful to hear that Venezuela carried out the investigation that the allegation warranted. That is, after all, the point of an investigation.

Now, let’s see the media goes all out over this story too.