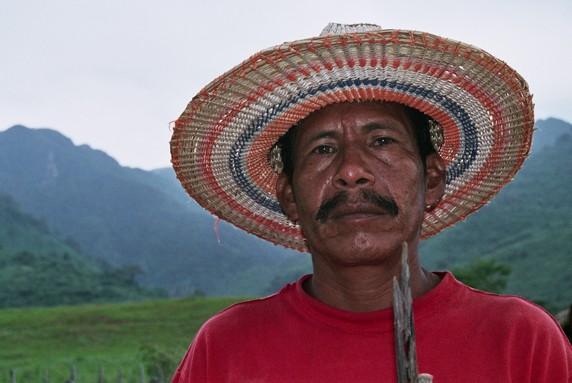 Venezuela: The Yukpa Are As Hopeful And Determined As Ever

Despite the overwhelming number of problems that the Yukpa face in the Sierra de Perijá mountain range in Colombia and Venezuela, the Yukpa are as hopeful and as determined as ever.

One of the main problems right now concerns the recently announced 2013-2019 economic plan of President Hugo Chavez, which stands in direct opposition to the Indigenous peoples’ needs, rights and their cosmovision. According to the Latin American Mining Monitoring Programme (LAMMP), the plan relies heavily on mineral deposits in the Sierra de Perijá, an area of high biodiversity in which the Yukpa have lived for more than 2500 years.

There are already numerous industry stakeholders in the region, ranging from cattle ranchers and farmers to agribusiness, mining companies and drug traffickers. “Its shared border with Colombia means that the Sierra de Perijá is also subjected to attacks by the paramilitary, hired killers and soldiers from the Fuerza Armada Revolucionaria Colombiana (FARC),” explains LAMMP. “However, the mining operations in Guasare and Paso Diablo are the most serious and latent threat facing the Sierra de Perijá’s indigenous peoples.”

“The continuing coal exploitation in the Sierra de Perijá, mainly in the basins of the rivers Socuy, Maché and Cachirí not only threatens the indigenous communities in the region. It also poses a significant danger for the Sierra’s ecosystem, since deterioration of that ecosystem impacts the water sources that feed one of Venezuela’s largest cities: Maracaibo and the entire west shore of the Lake Maracaibo. The loss of cloud forests, which are chopped down to make way for coal mining, are irretrievable losses due to the fragility of these ecosystems. The Sierra de Perijá has the highest number of plant and animal species per surface unit among all the world’s ecosystems.”

According to LAMMP, the government has also granted new concessions to Russian mining companies to exploit coltan and uranium in Perijá.

Amidst all this, the Yukpa and Bari Peoples continue to struggle for the restoration of their land rights which are now guaranteed under the Venezuelan Constitution of 1999.

Despite the guarantee of rights, the government has been very reluctant to return any lands that were usurped by previous governments, including areas that were given to Shell by the Dictator Juan Vicente Gómez and other areas that were turned into zones for Industrial livestock farming, thanks to Nestlé.

The Yukpa have been working to recover these and other lands since 1982, an effort that has led to numerous violent encounters at the hands of cattlemen, hired killers, guerrilla forces and the military.

The government’s reluctance to demarcate new lands is currently allowing this conflict to continue, even though it’s likely not the government’s intention. So far this year, a total of 7 Yukpa have been killed and many others were injured.

“The president isn’t at fault for this, but we know who is,” says Yukpa activist Jackelina Mémndez. “It’s the ministers.”

“The government ministries are manipulating us,” says Yukpa leader Sabino Romero, who is leading the struggle for the demarcation of lands. “The problem is that there is a political division within the ministries.”

Building on that hope, last month, Venezuela announced its intention to hold an assembly with the Yukpa in order to resolve the ongoing conflicts over land rights, specifically in the western region of Perijá, where cattle ranchers are actively opposing the Yukpa.

Yukpa leaders are also insisting that President Chavez take a closer look at the problem.