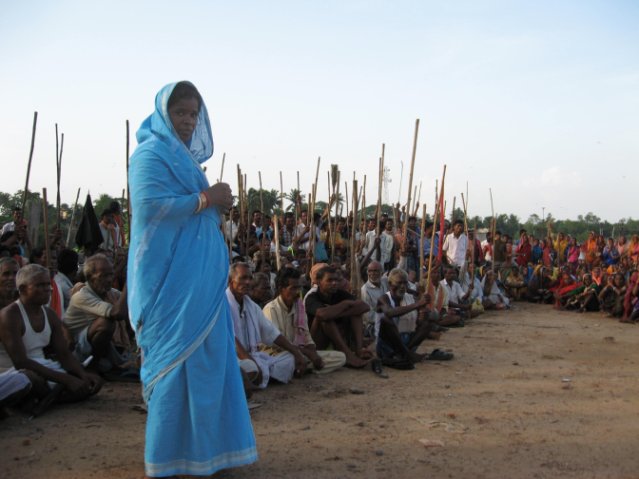 Fortunately, the vigilant and unwavering Dongria Kondh met the company with a road block, preventing Vedanta from going any further.

“Last night’s action follows high level meetings at the weekend between Vedanta’s billionaire chairman Anil Agarwal and Orissa Chief Minister Naveen Patnaik, who backs the mine,” says Survival International. “After the meeting, Agarwal told journalists that mining would start ‘within a month or two’.”

This of course spits in the face of Agarwal’s promise that “we will only start work if we have complete permission of the court and the people.”

Sure enough, the court gave Vedanta the go-ahead – but the Dongria Kondh, the custodians of the Niyamrigi hills in Orissa, India, have continuously stated that they cannot support the exploitation and destruction of the hills. Without them, the Kondh say, “there is no life for us.”

“The stand-off between local villagers and Vedanta’s bulldozers at the blockade site continues,” reports Survival. “Protestor Ajun Chandi, who has received a series of threatening phone calls from Vedanta, says, ‘You must let the whole world know what Vedanta is doing.'”

Survival’s Director, Stephen Corry adds, “Vedanta won’t be able to hide its work by invading the Kondhs’ land at night. It doesn’t even have official approval. Whether or not it gets it, the Dongria aren’t likely to agree to their homeland and most sacred site being destroyed. Vedanta is trying to intimidate the tribespeople. This is an appalling way for a major British company to behave, it isn’t going to work and Vedanta must now expect international opposition to grow.”