US Moves to Clean Up Uranium on Navajo Land 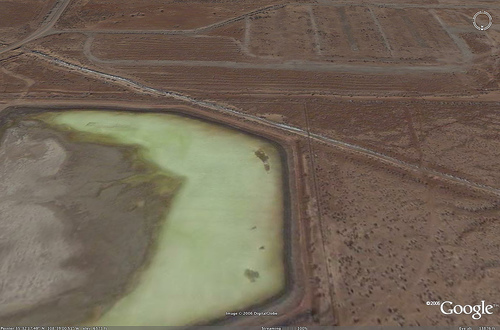 After more than forty years, the U.S. government is finally moving to clean up the uranium waste on Navajo lands.

On June 13, the US Environmental Protection Agency (EPA) released a five-year plan to start cleaning the radioactive waste left by more than 40 years of mining uranium on Navajo lands.

From 1944 to 1986, companies grabbed more than 40 million tons of uranium, producing 996 pounds of radioactive waste for every 4 pounds of uranium extracted. A great deal of that waste has never been cleaned up.

As a result, for three generations now the Navajo “have been breathing uranium-laden dust from mine tailings and drinking from wells tainted with minute traces of radioactive mining waste,” explains tomdispatch.com

More than a thousand mines were abandoned on the reservation. For every 4 pounds of uranium extracted, 996 pounds of radioactive refuse was left behind in waste pits and piles swept by the wind and leached into local drinking water. In addition to the hundreds, perhaps thousands, of Navajo miners who sickened and died of cancer and respiratory illnesses — it’s hard to say just how many, since nobody in power bothered to keep track — epidemiological studies reveal a terrible ongoing toll. Navajo children living near the mines and mills suffered five times the rate of bone cancer and 15 times the rate of testicular and ovarian cancers as other Americans. Exposure to uranium has also been linked to kidney damage and birth defects.

Recent research indicates that, in addition to being toxic and radioactive, uranium is also an endocrine disruptor and can have a devastating effect on health — even when only scant traces are present in the air we breathe or the water we drink. Uranium’s ability to bind to and deceive hormone receptors evidently interferes with cellular communication that governs metabolism, cell production, organ development, and gland function. Dr. Stephanie Raymond-Whish, a Navajo scientist, believes, for instance, that uranium exposure is one explanation for sky-high rates of breast cancer on the reservation.

The list of problems and damages brought on by uranium could go on forever, and will unfortunately continue long after the uranium waste has been cleaned – that is, providing the government actually cleans it up. Some Navajo aren’t too sure that’s going to happen.

Today, the Navajos say the new federal response effort, which includes testing of water sources and the review of hundreds of homes and buildings for radioactive materials, is a “good step forward.”

But they also have grave concerns about the proposal, which is short on specifics in several key areas, including funding, estimated costs and detailed remediation plans.

The US EPA more or less confirms this. Quoting the Associated Press,

Clancy Tenley, EPA associate director for tribal programs in San Francisco, said the work in the plan is within the existing budget and the agency expects to get sufficient appropriations in future budgets.

He said the cleanup could take hundreds of millions of dollars, though not all of that would be federal money. In April, EPA sent letters to viable companies who owned or operated multiple mines in an effort to get those companies to pay for some of the cleanup.

Tenley said the federal agencies combined have spent about $155 million over the last decade to address the contamination with an overall goal of dealing with the most urgent risks first — people living in contaminated houses and drinking contaminated water.

“By the end of the five years, we hope to have addressed the most urgent risks and to have a much better understanding of the scope of the problem,” he said.

Straight from the EPA’s Report (pdf), the most urgent risks (or at least the milestones of the 5-year plan) are as follows: 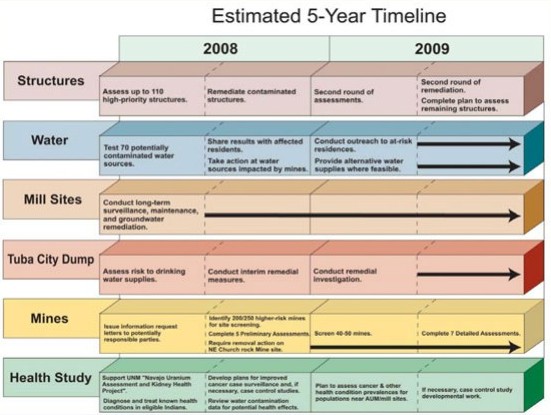 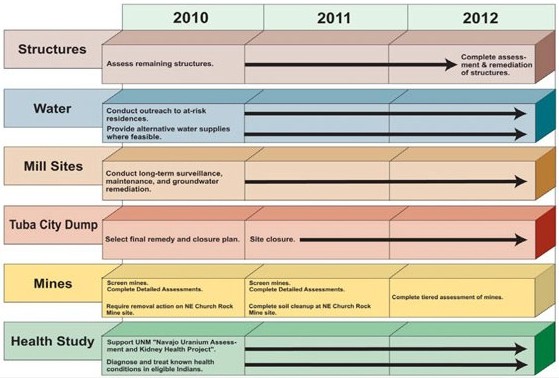 It remains to be seen whether or not the EPA will actually reach these goals. Nevertheless, the damage caused by the first uranium boom has been done. The Navajo People have been forever altered by the waste and there is no going back.