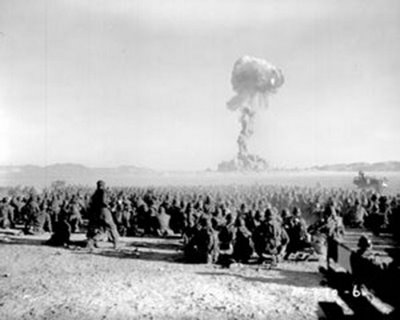 The Western Shoshone Defense Project (WSDP) informs us that a public comment period will close next week, April 10th, on a proposal by the U.S. Department of Energy to increase nuclear weapons development at the Nevada Test Site, said to be ‘the most heavily-nuked region on the planet.’ The Test Site is located within the Treaty-recognized territory of Western Shoshone lands and has long been protested by Western Shoshone and their supporters.

Please take a moment in the next few days to submit your comment. You can find out how to do so near the bottom of the WSDP Press Release…

April 3, 2008, 22:42 p.m. (PST) (Newe Sogobe (Lee, Nevada)): With gold prices soaring sky-high and the general public watching Presidential candidate antics, there’s more than just gold rush fever threatening the air and water out West. Under the radar screen, a public comment period closes next week, April 10th, on a proposal by the U.S. Department of Energy to increase nuclear weapons development at the Nevada Test Site. First announced in 2006 as “Complex 2030”, the new plan is called “Complex Transformation” and includes details on the proposal to upgrade the entire U.S. nuclear weapons complex and recreate the infrastructure to research, develop, and manufacture new nuclear weapons. See www.complextransformationspeis.com for more details. The Nevada Test Site is named as one of the plan’s key locations. The Test Site is located within the Treaty-recognized territory of Western Shoshone lands and has long been protested by Western Shoshone and their supporters.

This newest proposal by the United States’ government puts it once again in direct violation of a recently confirmed decision by the United Nations Committee on the Elimination of Racial Discrimination (CERD). In its decision, made public March 10, 2006, and confirmed again last month, the CERD Committee urged the United States to “freeze”, “desist” and “stop” actions being taken, or threatened to be taken, against the Western Shoshone Peoples of the Western Shoshone Nation. In its decision, CERD stressed the “nature and urgency” of the Shoshone situation informing the U.S. that it goes “well beyond” the normal reporting process and warrants immediate attention. The CERD decision explicitly cited ongoing weapons testing at the Nevada Test Site. Decision attached.

“The U.S. has never shown how it got title to our land in the first place. We have never agreed to this. To us, there is no transformation here– this is just a continued extermination of life– nothing complex about that. The land, air and water have suffered enough abuse already. We need to start cleaning things up. What is being done to our people doesn’t just affect us – it affects everyone and all life.” Stated Western Shoshone grandmother Carrie Dann as she returned from a recent indigenous convening in Chiapas, Mexico, where she and other indigenous elders and leaders met to discuss traditional teachings about climate change, environmental destruction and solutions for the future. These discussions will continue at the upcoming Protecting Mother Earth gathering July 17-20th in Lee, Nevada. See Indigenous Environmental Network site www.ienearth.org for additional information.

Western Shoshone leader and 2008 delegate to the UN CERD session in Geneva, Larson Bill commented: “By their own actions, like this new proposal, the U.S. is losing all of its credibility in the world community. Everything good that is out there they want to use for bad purposes. The materials in these proposed weapons – they came from the earth where they had a purpose. The companies and military dig them up and nothing good comes out of it. The world doesn’t need this, it’s got enough problems already.”

The Western Shoshone are not alone in opposing the government’s most recent plan. The Progressive Leadership Alliance of Nevada (PLAN) issued a letter to the Department of Energy last month supporting Western Shoshone Treaty rights and raising environmental and political concerns to the DOE. Letter attached. Likewise, the Union of Concerned Scientists (UCS) is calling on the public to send in comments and has stated publicly that it believes the push for new nuclear weapons could lead to a resumption of U.S. nuclear testing, which would lead to nuclear testing by other nations. See Union of Concerned Scientist site (ucswebsite) for additional information.

According to one recent UCS release: “A thorough re-evaluation would conclude that it is in the interest of the United States to pursue a world free of nuclear weapons. The DOE should focus on maintaining a safe, secure, and credible nuclear deterrent while supporting efforts to eliminate these weapons globally, and on dismantling warheads and safely securing weapons-grade materials. The United States should NOT pursue new nuclear weapons.”

“The position of those seeking social and environmental justice in Nevada is perfectly clear,” agreed Launce Rake, a spokesman with the Progressive Leadership Alliance of Nevada in Las Vegas. “International law, respect for our environment and common sense all suggest the same thing. We need to stop pouring money into the hands of the defense contractors and do what’s right for the Nevada Test Site: Shut it down and clean it up.”

WHAT PEOPLE CAN DO:

Individuals and organizations are strongly encouraged to submit comments on the Complex Transformation draft SPEIS proposal (by April 10, 2008) by fax, letter. or on the UCS website. You can send comments via U.S. mail to:

A sample letter from the Progressive Leadership Alliance of Nevada is attached.