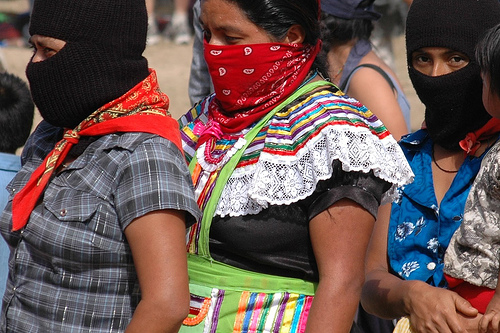 Photo by trailofdead, flickr.com
Support our journalism. Become a Patron!

Schools for Chiapas asks you to take a moment to help “Spread the Truth” about the recent kidnapping of a prominent right-wing Mexican politician. Despite claims of their involvement, the fact of the matter is: the Zapatistas just DIDN’T DO IT!

The Mayan communities of Chiapas and their supporters in “The Other Campaign” are being accused of kidnapping a prominent right-wing Mexican politician. An articulate denial of the kidnapping charges published in Spanish by the Zapatista movement argues that this accusation is another pretext for aggression in Chiapas. However this denial has been poorly circulated in English.

Therefore, we ask you to please forward the link below of this new English translation of the Zapatista document as broadly as possible:

Please post this truthful word on the Internet, send it throughout the blogosphere, tweet it, text it, Xerox it, fax it, iPod it & iPad it, snail mail it, paste it to walls, send it to your local alternative media, and most importantly talk about it with your family and friends. Do whatever you can and do it TODAY!

What’s important is that everyone understand unequivocally that the Zapatistas just DIDN’T DO IT! The dangerous accusation that Zapatistas kidnapped Diego Fernandez de Cevallos compliments and deepens a significant increase in tensions throughout Chiapas.

“Schools for Chiapas” is seriously alarmed at the continuing aggressions against the autonomous, Mayan communities of Chiapas, Mexico and encourages all reasonable people to do what they can to stop the spread of these malicious, unfounded rumors and accusations.

The original Spanish language denial is published on the web page of Enlace Zapatista at:

The well-known center of Oventic, Caracol II, The Central Heart of the Zapatistas in Front of the World, has long been open for anyone to visit and speak with representatives of the movement. Today those representatives are in silence and preparing for new attacks against their communities.

Clearly the lies about Zapatista kidnapping which are being widely propagated in the media represent one such attack. From our personal experience with autonomous Mayan schools, we know that it is absurd to suggest that the Zapatista movement kidnapped El Jefe Diego. The accusation itself is written in a contradictory and blatantly fraudulent manner.