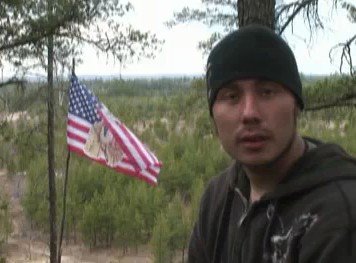 Urgent: Join tribes at Sacred Eagle Rock in Michigan to prevent Acid Mine

Indigenous People and non-native supporters have set up a protest camp at the base of Sacred Eagle Rock in northern Michigan. The multi-tribe encampment, it is feared, “could be raided by mine guards and police at any moment”. If you are in the area or willing to travel, you are encouraged to visit the site and help defend Eagle Rock!

American Indians and non-natives are encouraged to visit the northern Michigan campsite that is blocking a sulfide mine – as in sulfuric acid – from being built under Sacred Eagle Rock.

Levi Tadgerson, an Anishinaabe man who loves and respects the environment, narrates this video that invites everyone to join the encampment at the base of Eagle Rock – the sooner the better because a confrontation between mine owners, the police and those protecting Sacred Eagle Rock could happen at any moment.

In the video, you will see the many amazing things happening to protect Sacred Eagle Rock including an appearance by popular American Indian singer/songwriter Elder Bobby “Bullet” St. Germaine of Iron River, MI – an elder of the Lac Du Flambeau tribe.
He sings and leads a thank you drum under the shadow of Sacred Eagle Rock.

Eagle Rock has been a sacred place to hold ceremonies since the Ojibwa tribe was created and was seeded to the Keweenaw Bay Indian Community (KBIC) under treaties with the American government.

The multi-tribe encampment, that could be raided by mine guards and police at any moment, is blocking the Eagle Mine Project by international mining giant Kennecott Minerals and its parent company Rio Tinto.

KBIC member Glen Bressette Jr., 38, of Harvey, Michigan brought a rare legally-permitted Eagle has been received to award feathers to those who honor their tribes by protecting sacred Eagle Rock and other honorable actions.

Dozens of people from numerous tribes have spent days at the camp – and many others have brought supplies to the remote site on dirt roads about an hour from any city.

The state of Michigan has claimed ownership to the land – but the lease with Kennecott only takes effect when the mine has secured all permits.

Opponents say the mine must still get a federal EPA groundwater permit – but under a technicality the mine owners say they do not need the permit and recently put up No Trespassing signs.

The American Indians rushed to the sight after Kennecott ordered the arrest of longtime mine opponent Cynthia Pryor of Big Bay, MI on April 20, 2010.

Pryor was out for her usual walk on the Yellow Dog Plains when she spotted a bulldozer – and refused to leave saying the mine still had an EPA permit pending. Pryor is a member of the Yellow Dog Watershed Preserve.

Among the Ojibwa tribes from Michigan and Wisconsin on sight are KBIC, Lac Du Flambeau, and Bay Mills Indian Community.

As of April 30th, the mine guards has not confronted the campers – but the day before ordered no still or video cameras are allowed. That has campers worried about why what they do not want videotaped or documented – thus nerves are high.

When a reporter arrived a short time later – the campers allowed him on the sight and this story was videotaped.

The video was produced by the nonprofit Cedar Tree Institute in Marquette, MI, which has founded numerous youth, faith and Native American related environment projects.