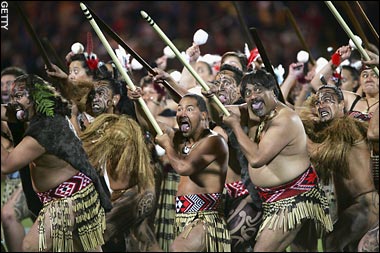 In a wave of massive repression, 2 days ago hundreds of Police began raiding houses throughout New Zealand, focusing specifically on Indigenous People working for self-determination. So far there have been 17 arrests, but the Police are currently looking for about 60 other individuals. Prominent Tino Rangatiratanga activist Tame Iti was among the first arrested at his home at 4am Monday morning.

Maori Party co-leader Pita Sharples says the raids have set race relations back 100 years. That the ‘justice system’ has lashed out against Maori, using tactics that reminded him of the “the atrocities committed at Parihaka in the 19th century, when 1500 armed police occupied the settlement and arrested its leaders.”

There are atleast 10 solidarity actions events planned or that have already taken place throughout Aotearoa / NZ and Australia. See here for a list. There are also numerous videos and more news available at http://indymedia.org.nz/

Aswell, Kiritapu Allan, Co-Director of Conscious Collaborations (ph +64 21 0256 5068) has sent out the following request for support, providing some commentary about the situation and ways you can help.

Please forward amongst your networks.

It is in great distress that I am urged to write this appeal and to inform our international community of the recent events that are happening within Aotearoa (New Zealand) social justice, environmental justice and indigenous movements.

For the past 60 hours Aotearoa activists have been subjected to home invasions, raids and interrogation under threats of terrorist activities against the state.

The Crown has decided to employ its recent Terrorism Suppression Act to lock down on social justice activist, movers and shakers and this is now world wide news with many of our close friends and families houses (mine included) being invaded, possessions confiscated and charges being threatened which will allow for solid activists to be charged under the Terrorist Suppression Act that carries sentencing for life.

The ages of people currently under custody range from 18 – 64. Many of us being implicated in this investigation are young people trying to do good things for our communities.

We are headed into an election year and these events are the largest scale operation headed by special operations from the head of states office. We have difficulty in understanding the timing for these invasions of our privacy except for political campaigning off of our backs.

The indigenous movement for self – determination is what is being blamed by the media for instigating acts of terrorism,

The Police showed up at my house with files of my activities over years, my phones have been tapped for years, my house under surveillance and everything subject to their review.

We have not been involved in any activities that could allow the police to make these claims and the distress they are causing for our families and children is devastating.

Right now we are fighting for friends in Police Custody to make bail. A number of these requests have been denied. A number of people are now been moved between prisons and I will be liasing with them and their families.

Court costs, travel costs, food costs and lawyer costs are above the heads of many of our people and we are asking for support from our communities both national and international to come to our aid in this time of need. ‘Terrorism’ world wide has become a cause for unjust state intervention into the lives of many peoples committed to change and now we are seeing that reality play out here in our own backyards within our own community.

Please support us in anyway specifically:

* Sending your concerns against state interventions to Annette king, Minister of Police (aking@ministers.govt.nz) and to your local New Zealand Embassy’s;
* By sending financial support towards the Family Support Network to assist with food, travel expenses and sourt costs and;
* By sharing our stories with your own networks.

We have had some international support by indigenous brothers and sisters by way of protests on the streets outside the NZ Embassy’s, we encourage any of you to organize and do the same.

Thank you all for taking the time to hear what is happening for us here in Aotearoa, these are very troubling times.

For further information please refer to:

Most of our internet sites have been taken down also in relation to these chain of events however all responses and correspondence can be made through me.