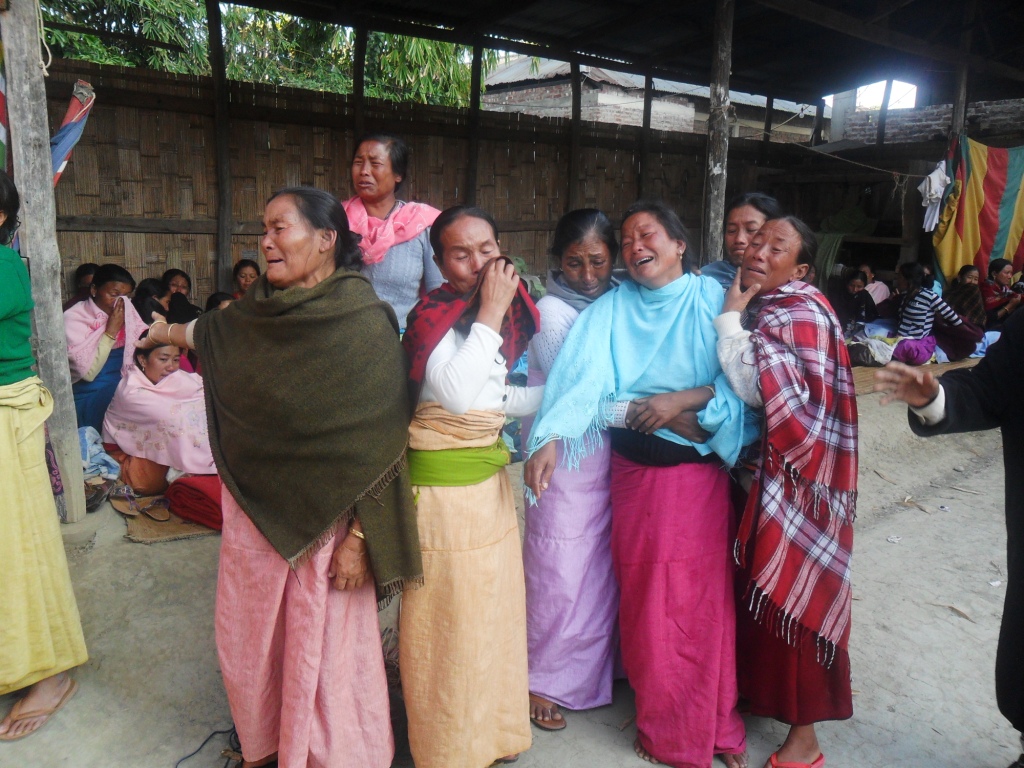 Displaced women after the arsoning of floating huts by Loktak Lake
Support our journalism. Become a Patron!

The Citizens’ Concern for Dams and Development (CCDD) has issued the following urgent appeal concerning a brutal assault on a group of eleven Meitei women who were protesting against the ongoing forced evictions at Loktak Lake in Manipur, India.

According to the appeal, the Manipur police charged at the women with batons during a protest at the Thanga Ithing Village in Chingjin in the Bishenpur District on December 19. The police also fired tear gas and about 200 rounds of ammo in an attempt to disperse the protesting women. However, that attempt ultimately failed.

One of the women, Ms Oinam Akasini, is still in a serious condition and has been referred to the Regional Institute of Medical Sciences in Lamphelpat. Two other women have also been advised to undergo further medical checkups due to their injuries.

All the injured women were taking part in a protest organized by the All Loktak Lake Fishermen’s Union and the All Manipur Thanga People’s Welfare Association to repeal the Manipur Loktak Lake Protection Act, 2006.

Since November 15, the Manipur state government has been exercising the draconian measures of the ACT to burn down the Meitei’s traditional floating homes on Loktak Lake.

At the time the evictions were last reported on Intercontinental Cry (November 19) nearly 200 homes had already been set ablaze. That count has since risen to 1,147.

Send an appeal letter in support of the women AND the Meitei people! Visit http://www.urgentappeals.net/support.php?ua=AHRC-UAC-251-2011. 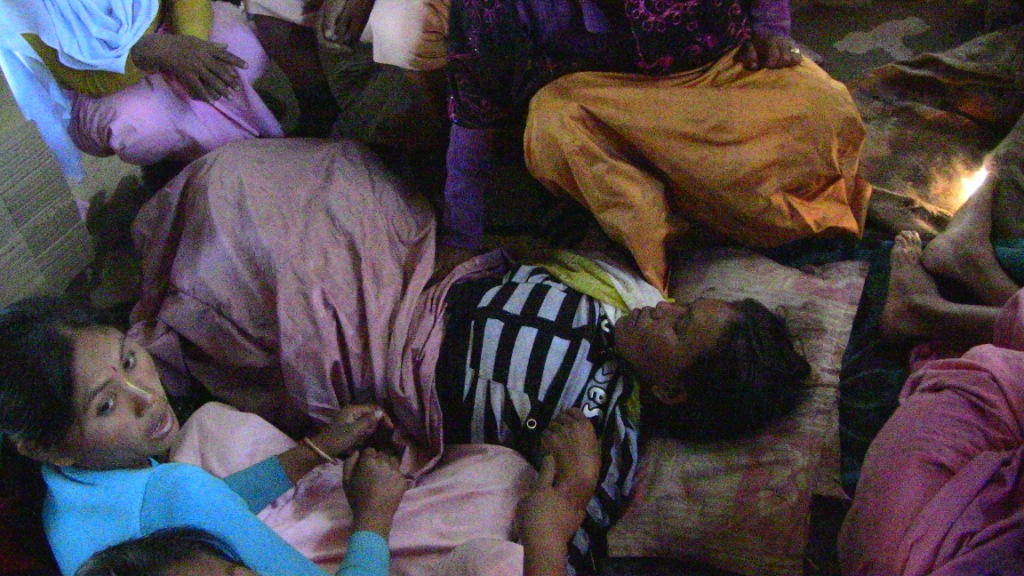 One of the women injured during the police assault 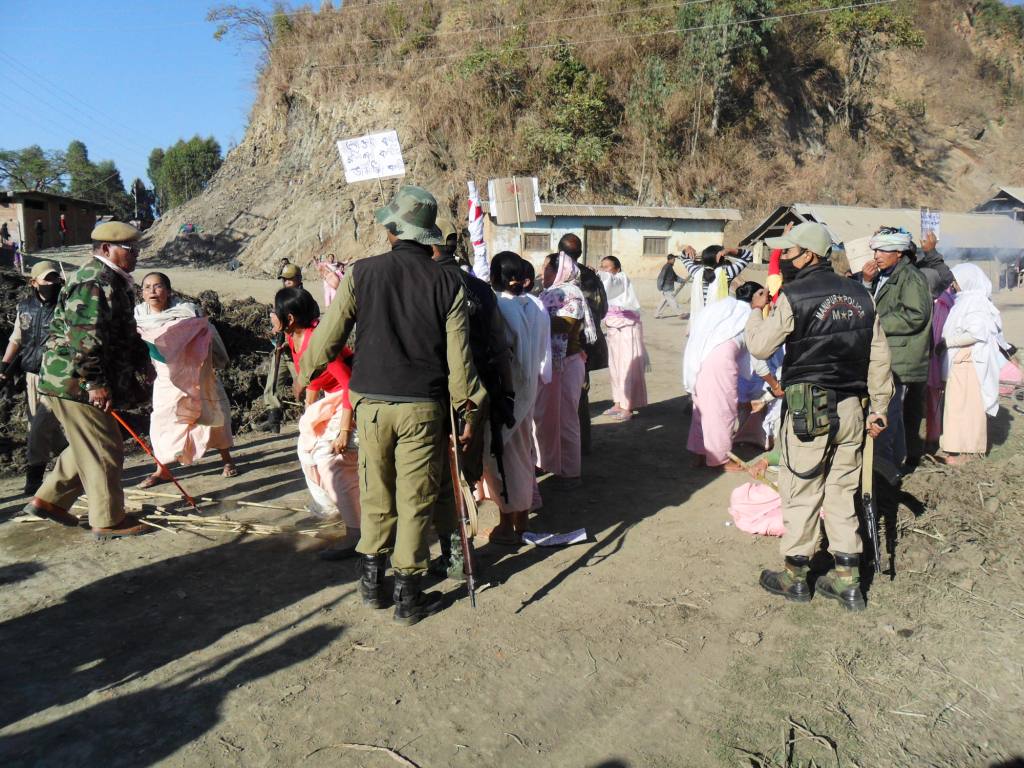 Police baton charge on women protestersAt least ten (10) women belonging to the Meitei people of Manipur in India’s North East campaigning against the controversial Manipur Loktak Lake Protection Act, 2006, were seriously injured in brutality unleashed by the Manipur police at Thanga Chingjin, Manipur on 19 December 2011. All the injured women were taking part in a protest rally, organized by the All Loktak Lake Fishermen’s Union and the All Manipur Thanga People’s Welfare Association to repeal the Manipur Loktak Lake Protection Act, 2006, under which the Loktak Development Authority and the Manipur Police unleashed widespread arson and destruction of floating huts over Phumdis, a floating vegetation mass, in Manipur since 15 November 2011 despite stiff opposition of affected families.

The protest rally commenced from Thanga Chingyang Hill till it was stopped at Thanga Chingjin in Bishenpur District by the Manipur Police personnel under the command of the Officer in Charge of Moirang Police Station, Mr. Dhananjoy. The police in an attempt to disperse the protestors resorted to baton charge, physical assault and even firing of around 200 live rounds of ammunitions, including from sophisticated guns in the air, which has caused shock and panic among the community members, already victimized due to displacement from livelihood sources. No women police personnel were involved in the crackdown of the protest which mainly comprised of women and elderly people, which is again a clear cut violation of women’s rights as many of the male police personnel physically assaulted the women protestors.

The injured women were taken to Community Health Centre Moirang. One of the Women, Ms. Oinam Akasini, wife of Oinam Tomba is still in a serious condition and referred to the Regional Institute of Medical Sciences on late evening of 19 December 2011. The condition of Ms. Khwairakpam Thambalmala and Heisnam Ashangbi also continues to be serious and were advised for further medical checkups. 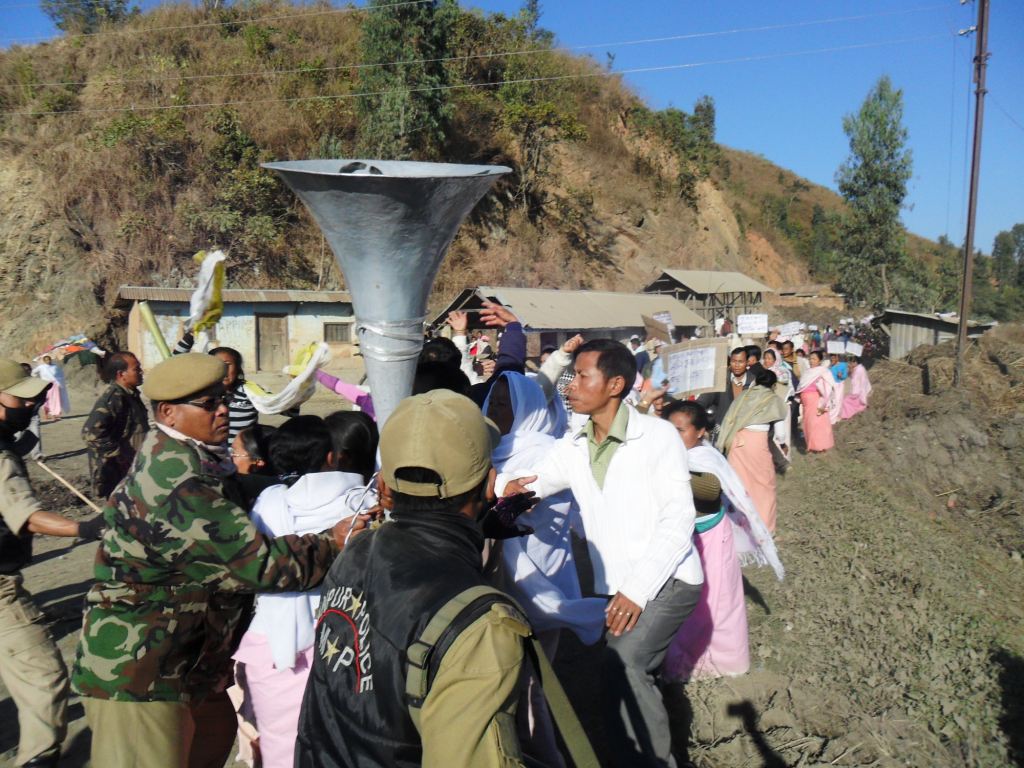 During the protest rally on 19 December at Thanga, the protesters raised several slogans like “Repeal Loktak Lake Protection Act 2006“, “Don’t prohibit fishing and building of huts in Loktak Lake“. The protestors were also protesting the absence of free, prior and informed consent of indigenous communities depending on Loktak wetlands in the management and protection measures of the Lake and the numerous restrictions imposed on the communities over the use and dependence on Loktak Lake. A vital aspect of this division is the ban on building huts or houses on phumdis inside the lake, planting athaphum, or engaging in athaphum-fishing in the core area, which will adversely affect over 10,000 people living in phumdi huts, as well as others dependent on Loktak Lake especially under Article 19 and 20 of the Act, which divides the Lake into two zones – a core zone comprising 70.30 sq km, which is a ‘no development zone’, or ‘totally protected zone’, and a buffer zone of other areas of the lake excluding the core zone.

The arsoning process and targetting the indigenous peoples depending on the Loktak Wetlands for survival to eviction and displacement is a clear cut violation and undermining of the provisions of the Ramsar Conventions, in particular resolutions VII. 8 of Ramsar Convention’s Conference of contracting parties held in May 1999 at Costa Rica and Resolution VIII. 19 held in Spain in November 2002, which provides guidelines for establishing and strengthening local communities and indigenous peoples participation and to consider the cultural values of wetlands in the management of wetlands.

Nearly one thousand one hundred and forty seven (1147) floating huts have already been burnt in the arsoning and destruction of floating huts by the Loktak Development Authority and the Manipur Police which commenced from 15 November 2011. These floating huts were used by the indigenous Meitei people for fishing and also for refuge for landless people who were earlier displaced by the Ithai Barrage of the Loktak Multipurpose Hydroelectric Project, which has inundated nearly 80,000 Hectares of prime agricultural land since its commissioning in 1984. 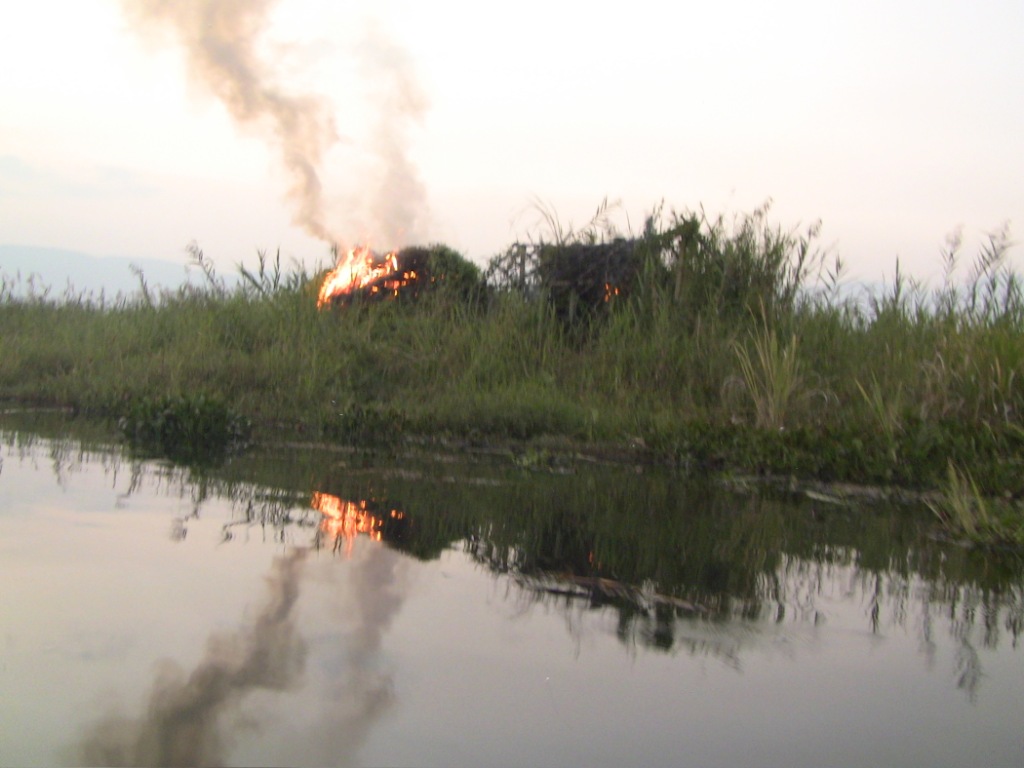 One of the burning huts

The fishing gears and nets of the communities, the only survival means to catch fish from the Loktak wetlands were also burned and these has left the community in further dire situation and will impact on the communities to freely carry out daily livelihood activities which they follow since time immemorial. There are about 5,000 family members living in all these floating huts in localities like Khuman Yangbi, Nambul Machin and Karang Sabal within the Loktak Lake. The affected family members including women, children and elderly had been seeking refuge at Thanga Chingyang Community Hall in Bishenpur District, Manipur.

Each household was offered 40,000 Indian Rupees (approx 900 USD) as compensation by the Government before burning down their huts. However, most of the villagers rejected this payment as the amount is too meagre and cannot compensate their livelihood and survival means. And moreover, there is no process to rehabilitate the affected villagers and their right to free, prior and informed consent has not been sought. And in many cases, the police also forced the displaced family members to burn their own huts.

The Government of Manipur, though its Loktak Development Authority has been blaming the indigenous peoples dwelling in Loktak lake for polluting and causing contamination of the Lake. However, the impact of Ithai Barrage of the Loktak Multipurpose Hydroelectric Project, commissioned in 1984, which led to huge scale devastation of Loktak wetland wetlands ecosystem, loss of indigenous plant and faunal species, disturbance of the wetlands natural balance and cleansing system leading to pollutions, increasing siltation from the rivers etc has not been considered and completely ignored.

The phumdi and people living on floating huts, ironically, has been highlighted as a tourist attraction by the national and Manipur governments in their official publications and calendars. During the current Sangai Tourism Festival (21-30 November 2011), the Loktak Lake and traditional floating fishing community has been also showcased.

Experts attending the one day discussion on “Contradictions of Ramsar Conventions Standards and Guidelines with Loktak Wetlands Management in Manipur” was organized by the All Loktak Lake Areas Fishermen’s Union and All Manipur Thanga People’s Welfare Association at the Conference Hall of Manipur State Central Library, Imphal on 17 December had recommended the repeal of the Manipur Loktak Lake Protection Act, 2006.

The Loktak Lake is long been targeted for corruption and manipulations by the Government of Manipur. As outlined in the Poknapham daily on 20 December 2011, the National Human Rights Commission of India has also directed the Government of Manipur to institute an inquiry by the Central Bureau of Investigation into the corruption and scandals surrounding the clearing of Phumdi (floating vegetation mass) by a company called K-Pro.

Urge upon the Government of India to

PLEASE SEND YOUR LETTERS BY FAX OR EMAIL TO: