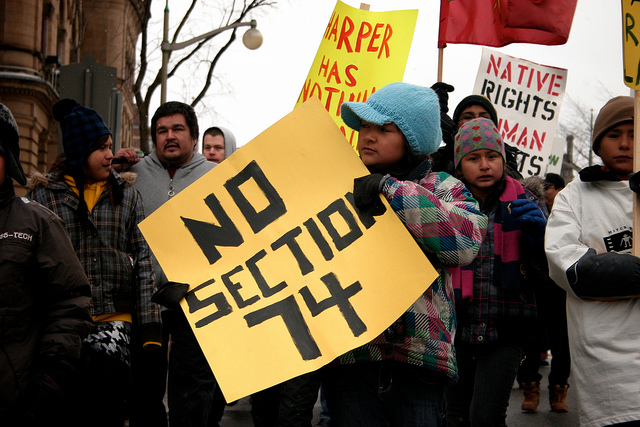 Update On The Situtation of the Algonquins Of Barriere Lake

Photo by Mike Barber (alienbeatpoet, on Flickr). Some Rights Reserved.
Support our journalism. Become a Patron!

Barriere Lake Solidarity Collective has issued the following update on the situation of the Mitchikanibikok Inik, also known as the Algonquins of Barriere Lake.

In 2010, Indian and Northern Affairs Canada (INAC) placed the Algonquin community under third party management, with the help of an obscure section of the Indian Act known as Section 74.

INAC says that it was forced to use Section 74–that is, intervene in the Algonquin community’s affairs and ultimately impose a new Chief and Council–because of an aging leadership dispute between two community members. However, it is believed that the government’s real goal was to get away from of a set of binding agreements with Barriere lake, including the landmark 1991 Trilateral Agreement.

As previously noted on IC, the government had been talking about a change in leadership since at least 2002, a whole seven years before the leadership dispute began.

In any case, “one thing is clear”, notes Barriere Lake Solidarity: “Barriere Lake is open for business now. Mining companies, logging companies, and costly Hydro electrification and reserve housing development have all been green-lighted by the [new] band council.”

Solidarity Update On The Algonquins Of Barriere Lake

Dear friends and supporters of the Algonquins of Barriere Lake,

Since the great outpouring of support at the Ottawa demonstration in December against the imposition of the Indian Act on their community, a great many of things have transpired on Barriere Lake’s territory. Stronger than ever, the community is ready to fight back and needs your help.

Please read the update posted below and stay tuned for ways to get involved.

1. MINING ALERT ON ALGONQUIN TERRITORY
2. REPORT ON THE ACTIVITIES OF THE INDIAN ACT BAND COUNCIL
3. REPORT ON SECTION 74 LETTER-WRITING CAMPAIGN

RAPID LAKE, QC – Last week, Barriere Lake community members discovered that Val D’ Or based Cartier Resources has begun line-cutting in preparation for mining exploration on their unceded Aboriginal lands. According to their website, the mining company claims that their “100% owned” land base of 439 square kilometers boasts rich copper deposits ripe for exploitation.

The so-called “Rivière Doré Project” was undertaken without obtaining the community’s free, prior, and informed consent – the minimum standards set out in the United Nations Declaration on the Rights of Indigenous People (UNDRIP), which Canada has endorsed in words but not in action. The mining project also violates the community’s own environmental protection regime, the Trilateral Agreement, which was signed in 1991 by Barriere Lake, Quebec, and Canada and has yet to be honoured.

The workers on site, predominantly Crees from the Mistassini and Oujebougamou First Nations, agreed to leave when the Algonquins traveled to the proposed mine location and explained their opposition to the development. The larger battle with the Cartier Resources, however, looms ahead.

2. REPORT ON THE ACTIVITIES OF THE INDIAN ACT BAND COUNCIL
The community remains largely in the dark concerning the activities of the band council. Illegitimate in the eyes of most people in the community, this band council rose to power through the imposition of an Indian Act provision (Section 74) that gives the Minister of Indian Affairs discretion to overthrow Indigenous customary government systems.

One thing is clear, though: Barriere Lake is open for business now. Mining companies, logging companies, and costly Hydro electrification and reserve housing development have all been green-lighted by the band council.

While investments in reserve infrastructure are badly needed, they are coming at the price of burying the larger issue of land management of the whole territory.

3. REPORT ON SECTION 74 LETTER-WRITING CAMPAIGN
Hundred of letters have been sent through the Barriere Lake Solidarity website to Minister of Indian Affairs John Duncan in protest of the forced imposition of Section 74 on the Algonquins of Barriere Lake (see http://www.barrierelakesolidarity.org/2008/03/donations.html). The Department has recently sent out replies to these letters which are telling of Canada’s communications strategy to contain the threat of public awareness on the issue. 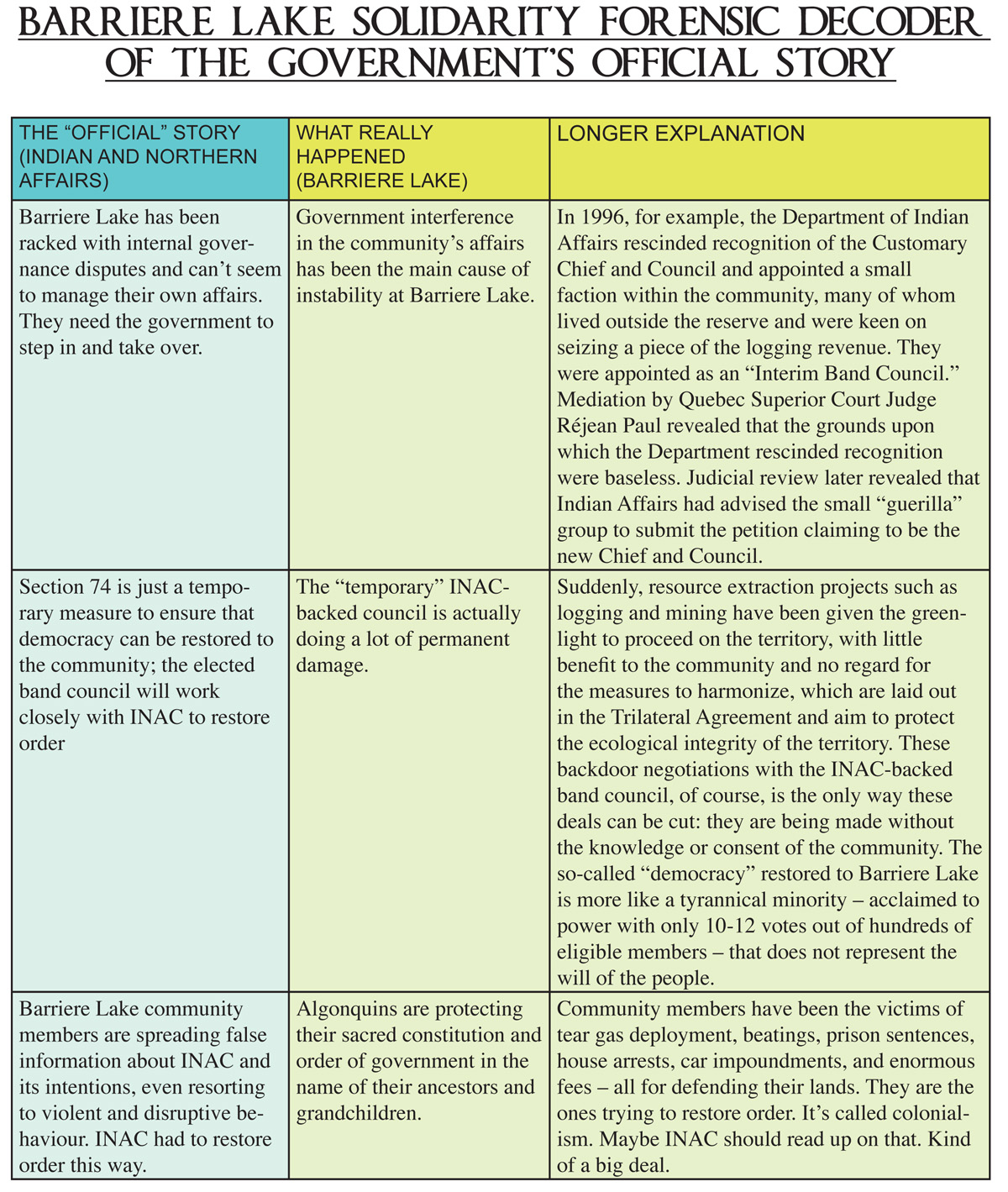 Barriere Lake Solidarity – forensic decoder of the government’s official storyResponding to these letters is Pierre Nepton, the Director General of the Quebec Region of Indian and Northern Affairs Canada (INAC). Nepton outlines the “official” story in his response letter: INAC had no choice but to reluctantly impose Section 74 due to internal conflicts over governance, which the community failed to resolve themselves.

But it’s cool. Barriere Lake Solidarity has prepared a forensic decoder of the government’s official story. Click the image to see it in full