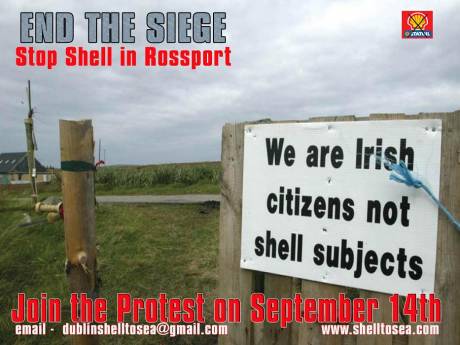 Upcoming Protest in Ireland against Shell

On September 14 there will be a protest in County Mayo, Ireland to highlight the ongoing community campaign against Shell and their proposed, highly controversial Corrib gas development—an onshore refinery and high pressure pipeline leading from the offshore Corrib gas field.

Since it was first proposed in 2000, local communities have been engaging in a steady campaign of opposition to this development, because:

1. Shell and the government plans to take land from local residents for the pipeline.
2. The pipeline will be going through boggy land with a history of landslides.
3. Emissions from the refinery will affect the nearby Carrowmore Lake, the main water source for 10,000 people.
4. Waste from the refinery, which would include nickel, magnesium, chromium, arsenic, and other metals/chemicals, would be pumped into Broadhaven bay.

Even more disturbing, as discussed in the video below, Shell has in fact been given state power and the ability to use it at their discretion, without any concerns of being held accountable or of being brought to justice for crimes against the land and the People. This has in many respects made local communities into subjects, citizens of Shell.

In related news, just a few days ago, an injunction was served against several community members, giving them until January 1 to dismantle the solidarity camp they erected 2 years ago.

In an ironic twist, the reason given by the court for the injunction is that they had no permission to set up a camp… and because it may potentially damage the environment.