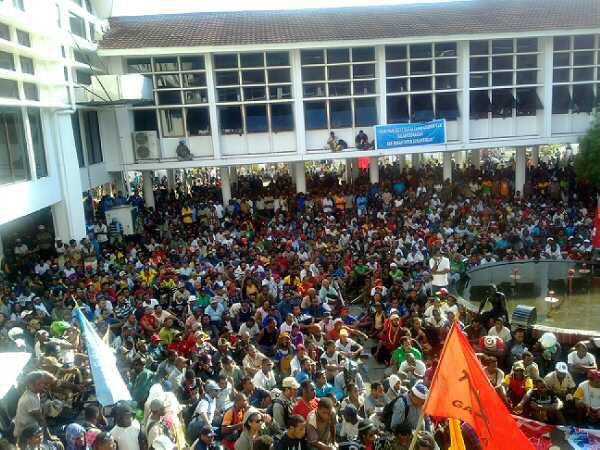 As protests continue to spread throughout the eastern half of the island of New Guinea, where indigenous land rights have been suspended, an unprecedented mass mobilization has begun in the west, in the Indonesian-occupied state of West Papua.

According to latest reports, as many as 20,000 Papuans have gathered in Jayapura to demand that Indonesia and the international community grant West Papua its lawful right to self-determination.

The Indonesian government has been caught completely off-guard by the effort; nevertheless, they have so far shown remarkable restraint, especially given the long history of repression against anyone that speaks up for independence or dares to raise the Morning Star flag.

Jacques Friedman, an independent reporter who has just returned from West Papua, has prepared a round-up of the latest news on the general strike. He has also written a background report on the situation, which you can download here.

For more information or to set up interviews with the organizers of the mobilization, please contact Jacques by email at nyaluguama@gmail.com

International news agencies have reported on the mass rally in Jayapura, capital of Indonesia’s Papua province. Thousands of people joined a long march, walking 17 km from the MRP (Majelis Rakyat Papua – Papua People’s Assembly) to the DPRP (Dewan Perwakilan Rakyat Papua – Papuan Provincial Legislature), rejecting the Special Autonomy granted by Indonesia in 2001 and demanding a referendum on West Papuan independence and an internationally-mediated dialogue with Jakarta. As protesters joined the rally from several points in the city, the crowd – claimed by media to number just a few thousand – swelled to nearly 20,000. They occupied the grounds of the provincial legislature under the watchful eye of police and army units.

According to messages from organizers, police arrested KNPB (Kominte Nasional Papua Barat – West Papua National Committee) member David Frans Huby at 9am in Jayapura. He was making a speech asking people to join the rally. He is now detained at Polda Papua (Papua regional police) headquarters. Police also prevented groups of people from nearby Keerom regency from joining the Jayapura march.

The Jakarta Globe reported on the rally and quoted one of its organizers:

“Special autonomy has failed to protect the rights of indigenous Papuans,” protest leader Markus Haluk said. “We want to urge Papua’s provincial legislature to hold a plenary meeting to declare that special autonomy is a failure and return it to the central government.”

The report states that the Papuan provincial legislature cancelled a special meeting that was to be held to process the demands of the protesters. It also reports that police detained a French journalist for reporting on the demonstration while on a tourist visa.

Papuan community media reported that Papuan provincial legislators were divided on how to deal with the rally and its demands. Legislators supportive of the MRP-sponsored declaration and the mass mobilizations backing it stated that there is a faction of legislators who oppose the movement and who were not present at the legislature for the planned special session. A group of legislators met with rally organizers FORDEM (Forum Demokrasi Rakyat Papua Bersatu – United Papuan People’s Democracy Forum) and stated that they must allow protesters to spend the night on the grounds of the legislature.

According to messages from organizers, fully armed Indonesian police moved in on protesters at 6 pm, after their deadline for the rally to disperse had passed. The situation escalated to a tense standoff and then protest leaders sought negotiations with police. A meeting was held for several hours, resulting in an agreement with police that protesters would be permitted to spend the night on the legislature grounds and stay there until 6pm on July 9th. Close to 20,000 people spent the night at the protest site. The situation is tense and dynamic, and given previous behaviour by security forces, things could change quickly on the ground. According to organizers, the decision by protesters on whether or not to disperse by 6 pm on July 9th will depend on any action taken by provincial legislators with regards to holding a special session to follow up the demands made in the MRP-sponsored declaration. Dominikus Sorabut of DAP (Dewan Adat Papua – Papuan Customary Council) stated that “security forces attempted to disperse our rally but they are outnumbered. With so many of us here, what can they do?”

Papuan media confirmed that police granted permission to protesters to spend the night, and that the special Brimob (Mobile Brigade) police forces had retreated, leaving only regular police units to guard the site.

Organizers have sought to deflect what they describe as misinformation campaigns aiming to provoke protesters and to spread rumours about some organizers. Dominikus Sorabut of DAP stated that “during the past weeks provocative text messages have circulated making various allegations about the intentions of this march. However, our action is peaceful and transparent. There are those who seek to provoke by spreading rumours, but this is just a scenario to bring chaos to our movement, and it is not succeeding”.

Indonesian media reported on these provocative text messages, with the regional police chief asking residents of Jayapura not to be provoked.

Meanwhile, Papuan media reported on rallies taking place in other towns in Papua, where protesters echoed the demands being made in Jayapura.

Community organizers throughout Papua reported to their networks on the situation in the various regions. In Manokwari, police violently blocked the rally and dispersed protesters. In Merauke, over 1000 people marched to the regional legislature to present their demands, and rallied against the failure of Special Autonomy to protect indigenous people, particularly in regard to the planned 80 million-hectare Merauke Food Estate. In the highlands town of Wamena, shops and businesses closed as thousands rallied, denouncing Special Autonomy and calling for economic justice and self-sufficiency, and marched to the regional legislature. Organizer Yulianus Hisage stated that “we are demanding that the Papuan people’s sovereignty be restored”.