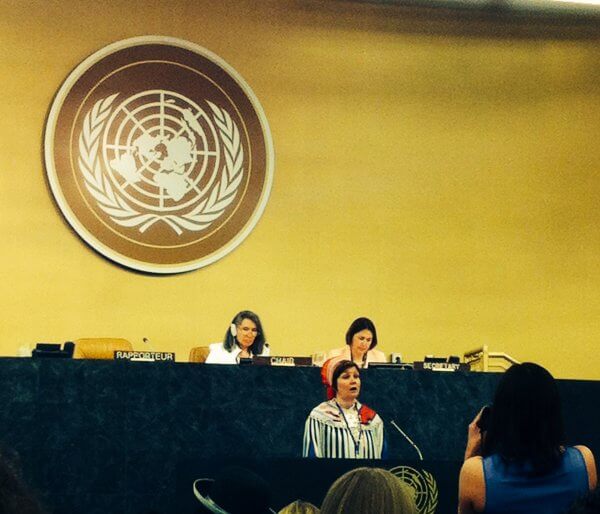 From 12 to 23 May 2014, the United Nations headquarters drew in more than 2,000 indigenous representatives who had gathered to attend the Thirteenth Session of the Permanent Forum on Indigenous Issues to discuss the fate of approximately 370 million indigenous peoples worldwide.
Support our journalism. Become a Patron!

The Permanent Forum was established in response to rallying cries for a permanent space to discuss the economic, social, environmental, developmental, human rights and cultural dimensions of indigenous issues within the high-level, global body of the United Nations. While the Permanent Forum’s founding may have represented a formal recognition for the urgent need to respect and promote the rights of indigenous peoples, this year’s Permanent Forum exposed deficiencies of the UN body. Following the meetings, it is reasonable to ask whether it provides a legitimate opportunity to reach tangible conclusions on how to resolve and end outstanding violations and historical injustices?

Despite the criticisms outlined below, the Permanent Forum continues to provide an invaluable opportunity for indigenous groups to speak up, cooperate and seek support via informal avenues. The Unrepresented Nations and Peoples Organization (UNPO) partook in a number of additional meetings with Ambassadors of UN Member State Missions to the United Nations, as well as human rights organizations, to raise awareness about the issues facing UNPO Members, such as Crimean Tatars, Assyrians, Khmer Krom and Chittagong Hill Tracts, among others.

Admittedly, the agenda of the Thirteenth Session seemed promising and constructive. Various indigenous and State representatives were set to debate land disputes, indigenous youth, sexual health and reproductive rights, and the post-2015 development agenda, among other issues. The special theme for this year’s Permanent Forum was the principle of good governance consistent with the United Nations Declaration on the Rights of Indigenous Peoples, which was adopted almost seven years ago. The principle refers to transparency, responsiveness and accountability of Governments, but also the right to self-determination, and full and effective participation in decision-making.

The two-week meeting loudly echoed a familiar call; a call for greater respect for the Principle of Free, Prior and Informed consent. Indigenous participants reminded attendees about the importance of the right to self-determination, consultation and participation in decision-making as a crucial determinant of indigenous peoples’ survival. The Principle of ‘Free, Prior and Informed consent’, which implies that an indigenous community has the right to give or withhold consent regarding any issues affecting them – such as development projects to be executed on the territory, which they customarily own and occupy – is widely accepted and enshrined in various international instruments, and some argue is becoming part of international customary law.

The principle was developed to prevent non-coercive negotiations and ensure an equal footing in deliberations about indigenous land use, particularly when it comes to extractive industries, forestry, plantations, conservation, but also in development and climate change dialogues. In accordance with the United Nations Declaration on the Rights of Indigenous Peoples, States are encouraged to consult and cooperate in good faith with indigenous peoples to obtain their free, prior and informed consent.

While equal participation of indigenous representatives on indigenous issues may seem like an established standard, it is far from being realized or observed. Not only was this central principle challenged at the Permanent Forum itself, but also by a disheartening controversy regarding the World Conference on Indigenous Peoples. On 21 December 2010, in A/Res/65/198, the General Assembly decided to organize a high-level plenary meeting – the World Conference on Indigenous Peoples – to be held in 2014.

Is The World Conference on Indigenous Peoples Just A Reflection of International Injustices?

Indigenous peoples have made their demands clear; the first-ever World Conference on indigenous issues must include full, direct and equal participation of indigenous representatives starting from the preparatory stages to the drafting of the final outcome document of the conference. Yet, the demands for full and equal participation fell on deaf ears. Generally Assembly President, Mr. Ashe had previously decided that indigenous representatives would not be actively involved. When indigenous groups mobilized and protested the blatantly State-centric approach, Mr. Ashe had proposed the participation of two indigenous advisers, who would ultimately not be involved in the drafting of the final conference document, which represents a crucial and decisive role of influence for indigenous peoples.

Mr. Ashe’s proposal unjustly defies the indigenous peoples’ right to choose their own representative; this right was delegated to the Permanent Forum. When a UN agency decides on behalf of indigenous groups who will represent them at the World Conference, it violates the principle that every deliberation, decision or document that affects indigenous peoples, their territories and interests must include full, equal and effective participation.

One may question Mr. Ashe’s State-favouring stance. One possible, and likely, explanation is that influential States exerted pressure on Mr. Ashe, raising the alarming issue of how the deliberations at the World Conference will unravel. Will States adopt conclusions hostile to indigenous peoples? Or will inconvenient issues for States simply be neglected?

The World Conference is not the only controversy. Interactive and effective dialogue was also questionable at the Permanent Forum. Several Indigenous representatives were precluded from speaking by procedural issues. The timing and speakers lists were not properly adhered to by the Chairperson of the Permanent Forum on Indigenous issues, which subsequently resulted in non-corresponding agenda topics and the need to cut off and exclude some speakers. For example, the representative of the Assyrian Universal Alliance was unable to deliver his statement due to logistical mishandling (both statements by the Assyrian Universal Alliance can be found at the end of the article). The Middle East, and its many indigenous populations, was neglected as a region all together. The mismanagement of speaking times during meetings unfortunately led to a general lack of debate; statements went unchallenged, questions unanswered and any possibilities of dialogue seriously stifled.

Furthermore, an obvious drawback to the discussions during the two week-long meetings was the prevalence and dominance of certain groups, but especially State representatives, who were guaranteed a large portion of speaking time. The Assyrian Universal Alliance had attempted to raise the issue of marginalization and underrepresentation of Middle Eastern indigenous organizations, but such questioning was side-lined.

The Permanent Forum issues recommendations to the Economic and Social Council, but will these be viable considering the limited opportunities for dialogue? The Thirteenth Session, with its special focus on good governance, which encompasses the right of indigenous peoples to fully and effectively participate in decision-making in all matters that impact their rights, lives, communities, territories and resources, could have begun the process of dismantling international injustices and effectively addressing how indigenous peoples are consulted and engaged, but it may have inadvertently reinforced and perpetuated traditional power systems.