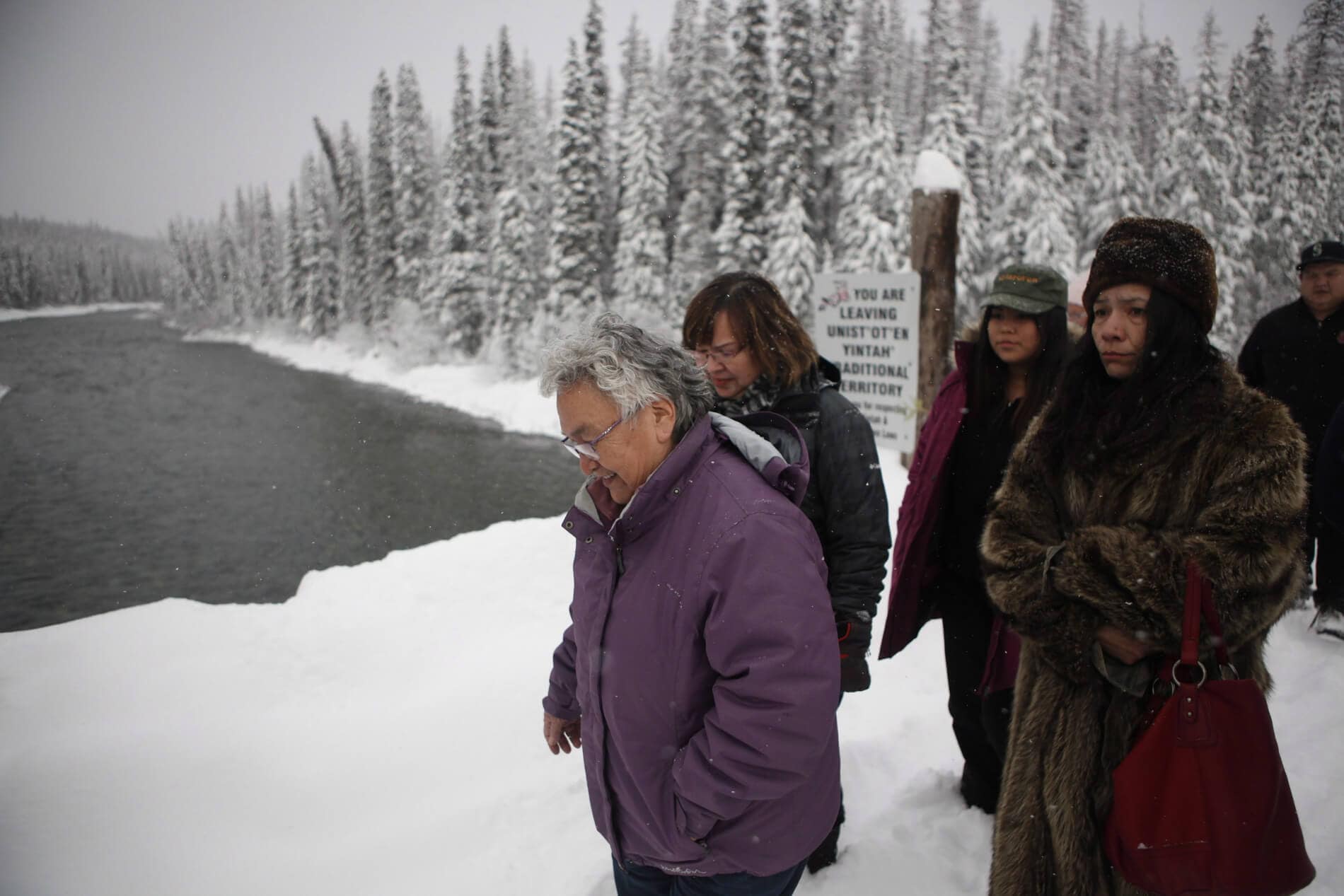 Unist’ot’en and the limits of reconciliation in Canada

Supporters of the Unist'ot'en camp and Wet'suwet'en walk along a bridge over the Wedzin kwa River leading towards the main camp outside Houston, B.C., on Jan. 9, 2019. THE CANADIAN PRESS/Chad Hipolito
Support our journalism. Become a Patron!

RCMP units armed with assault rifles and tactical gear recently moved to enforce a temporary court injunction issued by the British Columbia Supreme Court against members of the Wet’suwet’en Nation.

The Unist’ot’en camp and the Gidumdt’en checkpoint have been built to block the construction of the Coastal GasLink pipeline on the Wet’suwet’en Nation’s traditional territories.

However, the reoccupation is much more than a blockade. Over time, the camp has built a decolonial healing centre, and become a space where Wet’suwet’en and others come to reconstruct and nurture land-based relationships.

In their raid of the Gidumdt’en checkpoint, the RCMP dismantled the fortifications and arrested 14 Wet’suwet’en land defenders, including a Wet’suwet’en elder.

Despite the RCMP’s efforts to limit the ability of journalists to report on their operation, information and updates were widely shared on social media leading up to, during and after the raids.

In the aftermath of the RCMP’s actions, solidarity efforts and protests have been organized across Canada and in the United States in support of the Wet’suwet’en land defenders. 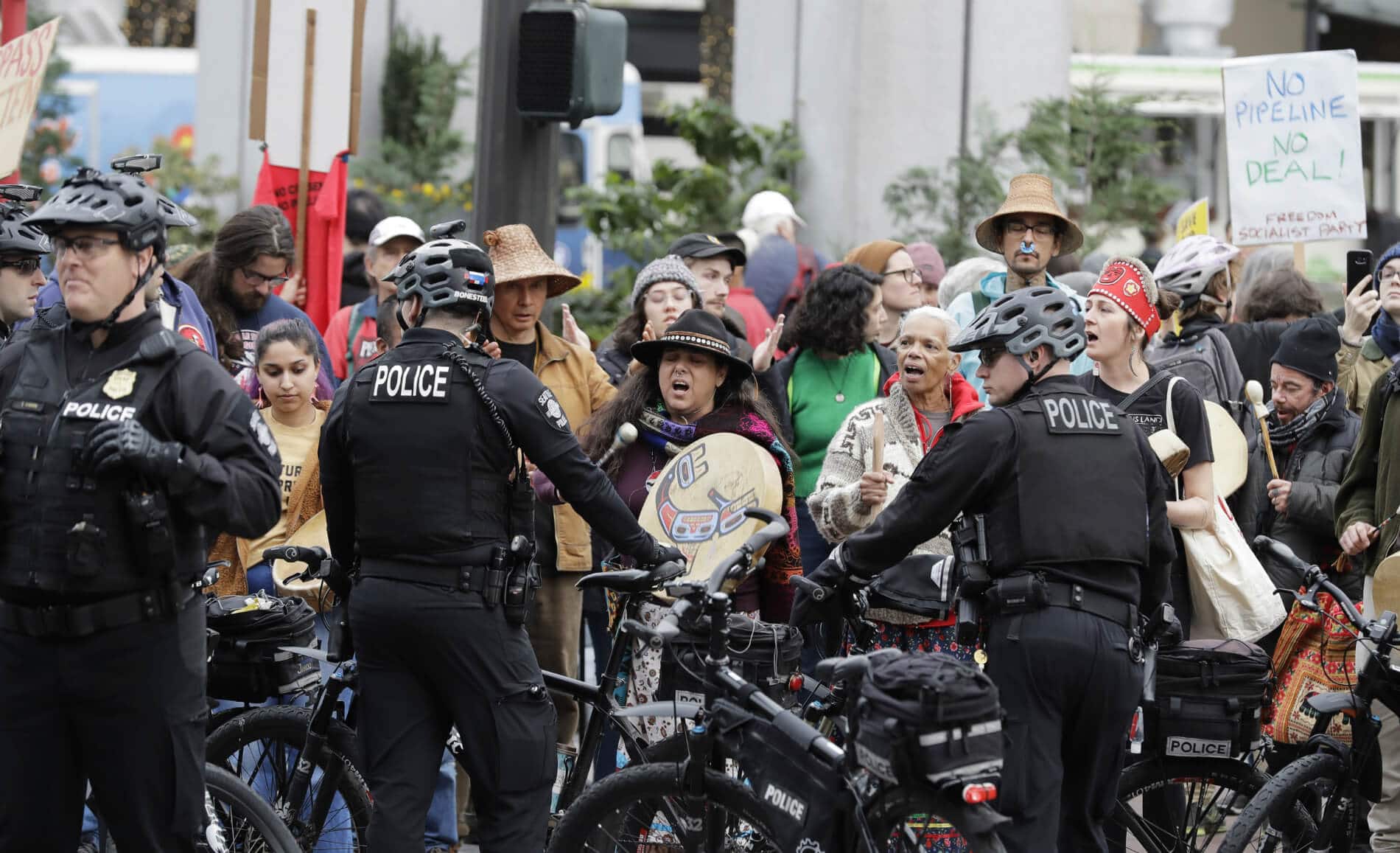 It’s important that settlers understand what Unist’ot’en represents in the era of reconciliation currently being promoted by governments in Canada.

The injunction and RCMP operations against the Unist’ot’en camp demonstrate the limitations of reconciliation as it’s developed in Canada. It underscores the need to offer greater support of Indigenous governance structures rooted in land-based relationships.

The militaristic images that have come out of the RCMP raids on the Gidumdt’en checkpoint are indeed shocking, but perhaps not surprising for those familiar with past government responses to territorial reoccupations by Indigenous peoples.

Similar to actions taken by Indigenous peoples at Standing Rock, at Oka and at Gustafsen Lake, the Unist’ot’en camp was created to fight back against government and corporate claims to unceded Indigenous territory. 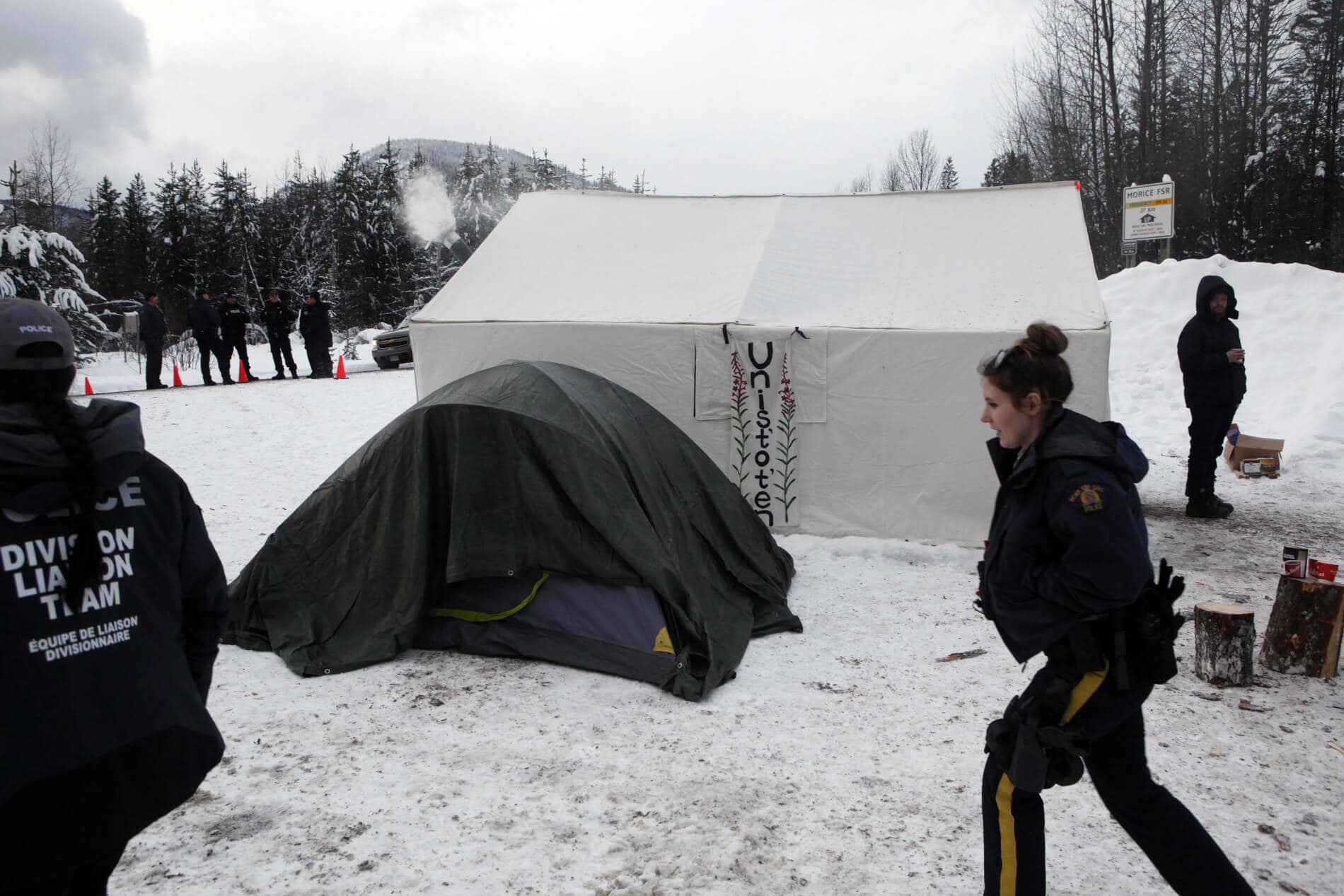 RCMP members gather at a Wet’suwet’en checkpoint to remove barriers on a bridge over the Morice River, southwest of Houston, B.C., on Jan. 11, 2019. THE CANADIAN PRESS/Chad Hipolito

Despite the natural gas pipeline receiving approval from the federal and B.C. provincial governments, as well as the elected chiefs of the Wet’suwet’en First Nation, it has been unanimously rejected by Wet’suwet’en’s hereditary chiefs.

This rejection is important, as legal authority and jurisdiction over the 22,000 square kilometres unceded Wet’suwet’en territory rests with the Wet’suwet’en’s hereditary chiefs, and not the elected band council.

The Wet’suwet’en’s territorial claims are supported by the Supreme Court of Canada’s 1997 Delgamuuk’w decision, which ruled that the Wet’suwet’en and the neighbouring Gitxsan had never surrendered their territory, and thus retain authority over any lands not ceded by treaty.

Despite this ruling, the Canadian and B.C governments have assumed their own sovereignty over Wet’suwet’en lands and have unilaterally signed off on pipeline projects moving forward on Wet’suwet’en territory.

Prime Minister Justin Trudeau called the RCMP’s actions to enforce the temporary court injunction “not ideal” but noted that “the rule of law” and the legal authority of the Canadian courts must be respected.

This response mirrors long-standing beliefs held by settler politicians and citizens who reject Indigenous authority over their own territories, favouring a view of sovereignty as residing solely with settler-organized governments and institutions.

Trudeau’s regurgitation of these views should be especially troubling given his government’s steadfast promotion of reconciliation with Indigenous peoples.

The limits of reconciliation

Beginning with the 2015 federal election campaign, the Trudeau Liberals have used a discourse of reconciliation to frame its commitments to Indigenous peoples.

Despite this, Trudeau’s Indigenous affairs track record has been largely inconsistent, blending together seemingly progressive changes with policy decisions that resemble those of his Conservative predecessor.

While in office, Trudeau has initiated a number of long-called for actions such as a National Inquiry into Missing and Murdered Indigenous Women and Girls and taken steps to developing an Indigenous Languages Act.

Yet his government has also bungled the development of an Indigenous Rights Framework and supported a number of highly controversial resource development projects that fly in the face of the principles of Free, Prior and Informed Consent.

The divide between rhetoric and action demonstrate Canada’s ongoing commitment to what Anishinaabe scholar Sheryl Lightfoot calls a “doctrine of discovery” model of reconciliation.

Under this model, the state has focused its efforts on rectifying its past treatment of Indigenous peoples by addressing contemporary socio-economic disparities and promoting the cultural equality for Indigenous peoples within Canadian society.

However, at the same time, the state has also taken political, bureaucratic and judicial steps to shore up its zero-sum claims to territorial sovereignty that limit and ignore Indigenous rights to land and resources.

The reconciliation discourse that has been seized upon by the Liberals and other settler politicians has provided cover for the status quo in Indigenous-settler relations to continue uninterrupted. There’s no focus on renewing and supporting Indigenous peoples’ land-based relationships.

The RCMP raids on the Wet’suwet’en should serve as a wake-up call to progressive-minded Canadians of the current trajectory of reconciliation politics in Canada.

The court injunction and the RCMP’s actions against the Unist’ot’en camp demonstrates Canada’s continued unwillingness to engage with Indigenous governance structures outside of a colonial politics of recognition.

The actions against the Wet’suwet’en also reflect the failure of settlers —politicians and citizens alike — to understand that meaningful reconciliation is about the inherent rights of Indigenous peoples to self-determination over their traditional territories.

Rather, what we’ve seen develop in Canada is a version of reconciliation that preserves the interests of settler populations, corporations and governments at the expense of Indigenous self-determination.

In our eyes, true reconciliation requires settlers to critically engage with the meaning of “nation-to-nation” relationship so often touted by federal and provincial politicians.

A starting point would be to recognize and engage with Indigenous people through the governance systems built and upheld prior to European settlement.

In the case of Unist’ot’en, this hasn’t happened. The federal government has labelled Wet’suwet’en’s hereditary chiefs as “Aboriginal extremists” instead of engaging with them as the national leaders they are.

Reconciliation must move beyond what’s palatable to the interests of settlers and what’s possible under the existing terms of Canada’s constitutional order.

We must move towards offering material restitution that supports Indigenous land-based relationships and governance structures while rolling back the absolute sovereignty of the Canadian state.