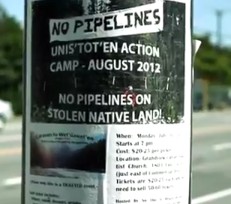 This is the second video subMedia.tv has produced about the struggle to stop a natural gas transport project called the Pacific Trails Pipeline or PTP. The Unis’tot’en, a clan of the Wet’suet’en Nation have built a protection camp to bock PTP, in so called British Columbia in Canada. This is the third time the Unis’tot’en have called for a convergence in their territories. This year’s camp attracted over 150 people who came from as far east as Montreal and as far south as Florida. The camp organizers opted not to tap large environmental ngo’s for material support, and instead reached out to grassroots, community based allies.

Out of the proposed pipeline projects that would cross  through Unis’tot’en land, Pacific Trails is the first one slated to begin construction and poses and immediate threat. The PTP project is partnership between Apache Canada, Encana and EOG Resources formerly Enron Oil and Gas. The 463-kilometer PTP pipeline would connect a liquified natural gas port in the pacific ocean to the Spectra Energy Westcoast Pipeline in North East BC, with the aim of transporting gas extracted through fracking, to overseas markets.

The much talked about Enbridge Northern Gateway Pipeline would transport tar sands oil from Fort McMurray, an extraction project that is devastating the nature and indigenous communities in the Athabasca region of Northern Alberta. The Enbridge pipeline would be built side by side to the PTP.

These dirty energy schemes not only threaten nature and indigenous communities in the north. They also have global implications. If decisive action is not taken to stop the flows of oil and gas, the effects of global climate change could be catastrophic for people, plants and animals the world over. This is why Indigenous people and their allies traveled from far away to this camp.