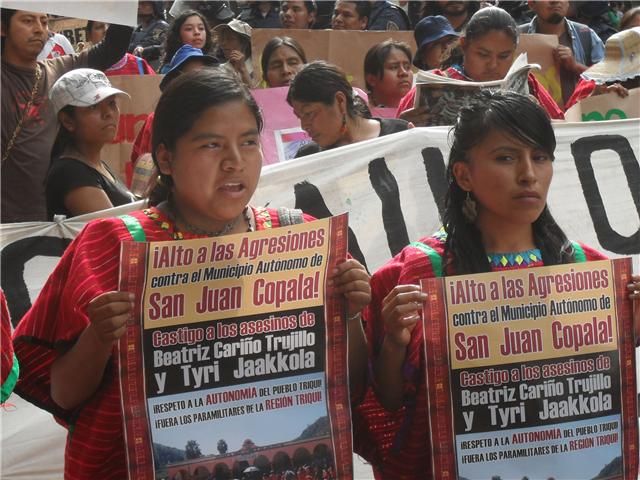 Unending Violence for the Indigenous People of San Juan Copala

Despite a growing outpour of international support and solidarity, there is no end in sight to the paramilitary violence being waged against the Indigenous Triqui people of San Juan Copala in Oaxaca, Mexico.

Just this week, two more Triqui women were attacked by members of the Union for the Social Well-being of the Triqui Region (UBISORT), a group that was formed in 1994 to help keep the Zapatista uprising in the nearby state of Chiapas from spreading into Oaxaca.

According to Mariana Flores, a spokesperson for the Triqui Women and Children who have occupied Oaxaca City’s main plaza, 42-year-old Natalia Cruz Bautista and 45-year-old Francisca de Jesús García were passing by the community of La Sabana in Santiago Juxtlahuaca, when they were confronted by the UBISORT members. When the two women resisted, one of them was shot and the other was beaten and then raped.

“We are sure that this aggression was committed within the framework of the national and international campaign in which we are demanding justice for Bety Cariño, and in which as an autonomous municipality we demonstrate, we are convinced that these attacks are done with the goal of making impunity pacts with the federal government, as well as as an act of pressure against the new government, says the Campaña de Justicia Bety Cariño Y Jyri Jaakkola in a statement issued on the day of the attack, September 7th.

A major part of that campaign right now is the ongoing protest camp in Oaxaca city. Currently the camp is being led by 20 Triqui Women and 25 Children.

That was certainly true in previous months; but now the paramilitaries have adjusted their malefic campaign to specifically target women.

As Kristen Bricker recently noted on her website, in the past four months:

Triqui men are still being targeted as well. For instance, two days before the attacks on Natalia Cruz Bautista and Francisca de Jesús García, four armed men with ties to the Movement for Triqui Unification and Struggle (MULT) and UBISORT murdered the municipal agent (mayor) of Agua Fría, Copala, Pedro Santos Castro.

The Oaxaca government, meanwhile, refuses to do anything in support of the Triqui. It’s as if the government wants them to just sit down and die? However, that’s one thing the Triqui won’t do, as the women in Oaxaca city made all too clear in the following statement:

“Our indigenous Triqui people continue to be attacked, there is no disastrous day which our people are not familiar with, the pain and rage are in our hearts, women, children, old people, men, all of us and them, suffer injustice from institutions, from paramilitaries, from the death of comrades who are merely counted as unending statistics. While the bank accounts of the pseudo-leaders of the left continue to grow, those of us from the Autonomous Municipality who use our words to denounce them only receive rhetoric and demagogic speeches, and we note the growing politics of paramilitarism which is nothing but a never-ending spiral of violence that condemns us to death.

“How much more do we need to say that our struggle is for dignity, justice, freedom, work, respect? How much more do we need to call on the people who are silent and bowed? How much more so that they join the struggle for freedom, for respect for their rights, for autonomy and self-determination, to decide our destiny as indigenous peoples, to protest against the Mexican state which violates our rights!? What use are international treaties if an old and obsolete constitution does not guarantee the rights of the peoples of Oaxaca?

“Today, after almost 518 years of displacement and discrimination, of genocide against our people, governments like that of Ulises Ruiz continue to repress us. It is enough to say that with their racist and discriminatory politics they seek to remove us from the public spaces because the Indians, the Triquis, we give Oaxaca a bad image. What will the tourists think? To protest is our right; however, we are not here because we want to be. Ulises Ruiz, like Jorge Franco and Evencio Martínez, knows that they are the ones who have set fire to our region and that we indigenous Triqui women are the ones who suffer the violence for which they are responsible, which is why we have nothing to celebrate as they have left us outside of history.

“This is why we call on all the women and men of Oaxaca who have struggled against these tyrants, those who have lost their comrades, those who have taken to the streets to demand justice: to fight for dignity so that they do not silence us once again and to reinforce our encampment of Triqui women, mothers, comrades, wives, and children from a town that has risen up to shout – Enough! They want to do away with our encampment and we will not let them. If necessary, we will defend it with our lives!”

If UBISORT’s just going to kill them anyway, what choice do they have?

Please send your appeals to:

Please send a copy of all writings to: