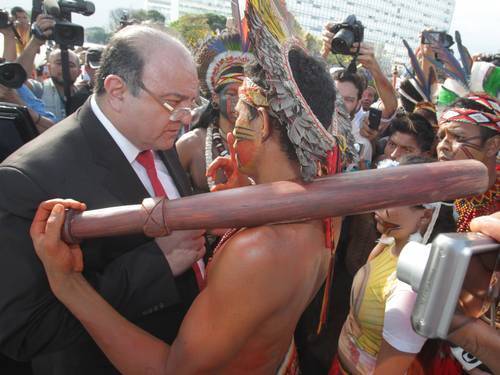 Indigenous women in Ecuador representing the Shuar, Quechua, Sápara, and Huaorani walked for five full days, passing over a mountain range, in order to deliver a manifesto protesting mining and oil extraction operations that the government is allowing on their territories. In the manifesto, the women asserted that the extraction operations break the government’s agreement, signified by its ratification of ILO 169, to obtain free, prior, and informed consent from indigenous peoples before making policy decisions that will affect their territories.

Riot police and members of the Group of Special Operations (an elite, special unit of the Chilean Police force), evicted the Mapuche Community of Temucuicui from their ancestral lands in the Araucania Region of Southern Chile. More than two years ago, the self-denominated “autonomous” community returned to the lands, from which they were dispossessed. Despite the police burning their homes, running over a flock of sheep and assaulting at least two people, the families of Temucuicui re-entered the lands without fear of another eviction.

In several centers across West Papua, Indonesian police and army (TNI) again cracked down on peaceful political demonstrations held by the West Papua National Committee (KNPB), resulting in the injuries of several participants, with unconfirmed reports of police opening fire in related incidents against KNPB members in Kaimana. The demonstration was dedicated to commemorating the fifth anniversary of the founding of the International Parliamentarians for West Papua.

Colombia indigenous rights group ONIC decried an excessive police response to a protest that left 19 people wounded. The protesters had been casually marching down a road when they were “stopped and threatened” by the riot police who were accompanied by army forces. Following continued intimidation and threats, the police and National Army reportedly opened fire. The protest was part of a new national mobilization to convince President Juan Manuel Santos to open dialogues with indigenous community representatives to address ongoing economic injustices and human rights abuses.

Just two days after UN Special Rapporteur James Anaya’s Canadian tour concluded, hundreds of RCMP officers raided a peaceful Mik’maq protest camp near Rexton, N.B. The RCMP were enforcing a court injunction for SWN Resources Canada, who was proceeding with exploratory drilling at their shale gas development site which is located on Elsipogtog First Nation lands. Despite the heavy presence of children, women and elders, the RCMP went on to shoot tear gas, plastic bullets, and pepper spray at the unarmed protesters, and arrest more than four dozen people, including journalists who were on the scene.

The world’s second largest ferronickel mine operation was shut down by the Zenu Peoples in the northern department of Cordoba, Colombia. BHP Billiton, the owner of the Cerro Matoso mine project, previously displaced the population of 6,000 Zenu, leaving them without a land-base. Still landless, the Zenu say that the mine is now affecting local soil and waterways leading to a rise in cancer within the community. In response to the protest, The Mining and Energy Ministry offered to set up a new indigenous reserve and to carry out health studies on possible environmental impacts of the mining operation.

The Second Continental Summit of Indigenous Communication was held in Santa Maria Tlahuitoltepec, in the Sierra Norte of Oaxaca, Mexico. The important summit brought together indigenous media makers from various countries in Latin America to share their ideas and experiences and to continue planning the future of Indigenous multimedia communications.

Brazil’s Supreme Court upheld an important 2009 ruling that led to the removal of non-indigenous rice farmers who were illegally occupying the indigenous territory of Raposa Serra do Sol. Prior to the 2009 ruling, the farmers viciously resisted their eviction by attacking indigenous people, destroying bridges, setting up roadblocks, throwing homemade bombs into homes and threatening to massacre any number of Makuxi, Wapixana, Ingariko, Patamona, and Taurepang–the Indigenous Peoples of Raposa Serra do Sol. In upholding the original ruling, the Court maintained the entire set of original conditions including the restriction of Raposa Serra do Sol to Indigenous Peoples.

Native communities from Malaysia’s remote Baram district on the island of Borneo warned state-owned electricity provider Sarawak Energy to remove its construction machinery from their lands within three days. The machinery had been transported to the Baram region in order to prepare the construction of a 1200 MW dam that would displace up to 20,000 natives and flood a rainforest area of 400km2.

Offering solidarity to Indigenous Nations, five Carvers from the Lummi Nation recently set out on a journey up the Pacific North West Coast hoping to send a message of Kwel’Hoy, or ‘We Draw The Line’ to the resource extraction industry. With them, lain carefully on a flat bed, the Lummi carried a beautifully-carved 22-foot cedar totem pole for Indigenous communities to bless along the way. Their journey gained international attention as a pilgrimage of hope, healing and determination for the embattled Indigenous Nations they visited.

Australia’s Prime Minister declared that West Papua is “better off” under Indonesian Rule. Following an incident in Bali where three West Papuan students occupied the Australian consulate to protest conditions in West Papua, PM Tony Abbott told reporters in Bali that “the people of West Papua are much better off as part of a strong, dynamic and increasingly prosperous Indonesia”. Since Indonesia occupied West Papua (the western half of the island of New Guinea) as many as 500,000 indigenous men, women and children have been killed.

The relatively unknown occupation of Ontario’s Springwater Provincial Park entered its 7th straight month. In April of this year, after Ontario Parks took down its flag and changed the park’s status to non-operational–due to low visitation and funding–a small group of people from several Indigenous nations set up a camp inside the park land, exercising Article 26 of the United Nations Declaration of Indigenous Peoples, concerning the right to lands and resources that were once traditionally occupied. It is the group’s goal to see Springwater as an educational and spiritual centre. So far, they’ve held full moon and drumming ceremonies, children’s programming and feasts.

The Tuareg-majority National Movement for the Liberation of Azawad (MNLA) agreed to resume peace talks with the Malian Government. The MNLA suspended its participation in the talks in response to the government’s rigid refusal to work towards an equitable solution for the conflict in which the MNLA sought to establish an independent territory spanning the northern half of Mali, part of the Tuareg’s ancestral territory, Azawad. The Tuareg-majority guerrilla is now attempting to establish self-government for Northern Mali, a position the Malian Government rejects. Despite any difficulties, however, the MNLA decided to come back to the table in order to “create a reciprocal climate of trust”.

The Committee for Future Generations along with individual members of English River First Nation and Lac La Ronge Indian Band att ended Canadian Nuclear Safety Commission (CNSC) hearings to oppose a set of license renewals for uranium mining and milling projects in northern Saskatchewan. Under existing contracts, it is illegal for the First Nations to formally oppose such licenses at the hearings. Nevertheless, the risk of continued mining is too great to be ignored by the informal group of intervenors.

Nearly 1,500 Indigenous Peoples from across Brazil occupied a central government road in the federal capital in response to a new legislative assault that threatens to severely undermine or extinguish Indigenous rights in the country. The action–a part of a national mobilization–was a swift follow-up to an attempt by the diverse group of protesters to enter the National Congress, where they were met with pepper spray. Seeking a more reasoned approach (which may very well turn out to be little more than a distraction), the government opened talks with the representatives.

Indigenous farmers in El Salvador are increasingly returning to the traditional cultivation practices of their ancestors to protect their livelihoods from climate change. Over the past three years, 100 Nahuat-Pipil farmers have walked away from modern agricultural norms, choosing to use native seeds, caring for the earth with organic fertilizer, and exchanging seeds between each other.