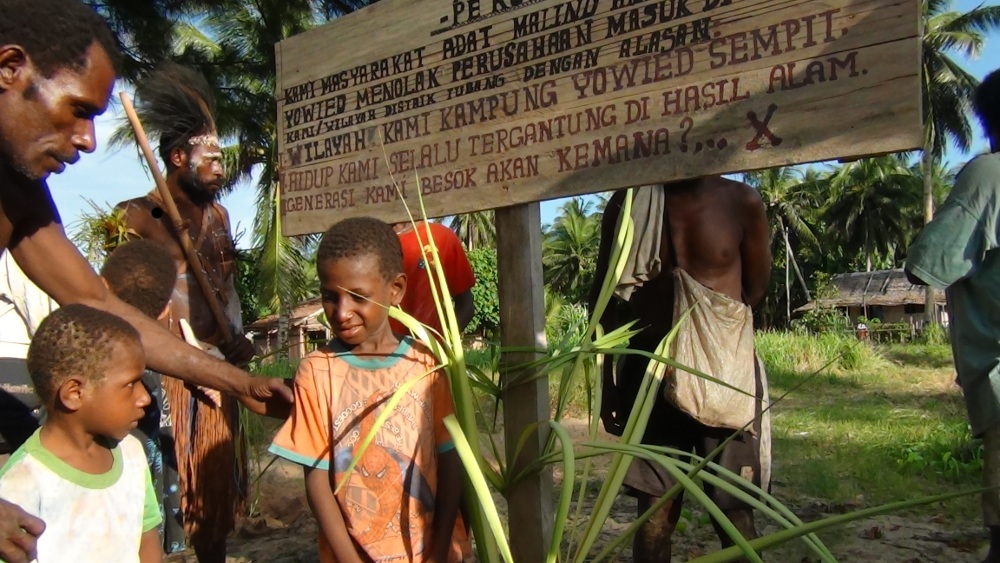 A Papuan community in Yowid stating their opposition to PT Mayora and PT Astra (Photo: AwasMIFEE )
Support our journalism. Become a Patron!

A Papuan community in Yowid stating their opposition to PT Mayora and PT Astra (Photo: AwasMIFEE )

In this months’ Underreported Struggles: Kenya government forestalls escalation of a long-running Maasai-Kikuyu conflict;Israeli authorities destroy Bedouin village for the 54th time in three years; The Murrawarri take their first steps toward becoming an an independent republic.

Two Maya Q’eqchi children from Monte Olivo community, in Alta Verapaz department, Guatemala, died from bullet injuries after being shot by a “hitman” that was reportedly hired by the company Hidro Santa Rita SA. According to Real World Radio, the two children, aged 11 and 13, were shot during the attempted murder of David Chen, leader of the resistance to the company’s hydroelectric project. No one has been arrested from murder of the two children, David Eduardo Pacay Maas and Hageo Isaac Guitz.

The Confederated Tribes and Bands of the Yakama Nation reached an unprecedented, out-of-court settlement with the U.S. Department of Justice (DOJ) and the Federal Bureau of Investigation (FBI) regarding a 2011. federal task force raid of Yakama Reservation trust lands. The U.S. agreed in the settlement to honor the law enforcement protocols set forth in the Yakama Treaty of 1855, assuring that, from now on the FBI will communicate with Tribal Police before they enter Yakama Indian Country.

Three Indigenous Tolupan from Yoro district in Honduras, were murdered while carrying out peaceful actions to prevent illegal forest clearing and exploitation of natural resources in their territory. According to The Broad Movement for Dignity and Justice (Movimiento Amplio por la Dignidad y Justicia, MADJ), the Tolupan had been receiving death threats from individuals who were brazenly walking around the community fully armed, provoking fear in the residents of the area. The National Preventive Police Force and various government officials, despite being warned of the threats, failed to take any kind of action to protect the Tolupan.

A Saskatoon court granted the Thunderchild First Nation a temporary restraining order against some of its own citizens who occupied a ceremonial site in opposition to seismic exploration that was taking place in the area.The exploration involves setting off explosive charges 15 meters underground, which protester Marilyn Wapass says is disturbing the sacred ground. The unsympathetic Court of Queen’s Bench prohibited anyone from blockading or preventing Tonare Energy from detonating the remaining charges.

India’s Dongria Kondh tribe overwhelmingly rejected plans by British mining giant Vedanta Resources for an open-pit bauxite mine on their sacred lands. A total of twelve Kondh villages unanimously voted against Vedanta’s mine during a consultation process that was ordered by India’s Supreme Court last April. The results of the consultations will now be considered by India’s Ministry of Environment and Forests, who will have the final say on the mine—but few still believe the project will be given the green light.

In British Colombia, Canada, members of the well-known Klabona Keepers served Fortune Minerals Limited with a “24-hour eviction notice” informing the company that it must vacate the Tahltan’s unceded traditional territory. Fortune Minerals ignored the deadline, leading the Tahltan activists to block the road leading to the site of the company’s proposed open pit coal mine. The protesters then proceeded to occupy some of the company’s drills.

Israeli authorities destroyed the Bedouin village of Al-Araqib for the 54th time in three years, continuing its effort to relocate nomadic Bedouins in the Negev desert to various settlements.The Bedouins, however, refuse to be relocated, saying that they purchased their land in the Negev desert before the establishment of the state of Israel.

The Blackfeet Tribal Business Council unexpectedly cancelled proposed oil and gas developments near Chief Mountain . The mountain, located near the Canadian border and on the boundary between the Blackfeet Indian Reservation and Glacier National Park, is considered sacred by many of the Blackfeet people; however, some members of the Blackfeet business community (like Ron Crossguns of the Blackfeet Oil and Gas Department), have derisively dismissed anything sacred about the Mountain.

The Embera denounced the Colombian government’s decision to let the Air Force indiscriminately spray Embera lands with herbicide to destroy existing coca crops. The Embera reported that, as a result of the aerial spraying, their water and crops became contaminated, causing several community members–including children–to fall ill. As noted by New Internationalist, “the Embera do not oppose the eradication of coca, in fact, in 2012 they approached the government asking for help to eliminate it, while expressing total rejection of aerial-spraying.” The Embera are now demanding respect for their rights and as well as urgent health support, emergency food and clean water supplies.

Traditional Indigenous leaders from West Papua warned that one of Indonesia’s largest consumer goods companies, PT Mayora, forced them to sign away their lands under threat of being branded as “separatists” by the Indonesian police. Given the fact that that such an accusation comes with a heavy cost (The accused become potential military targets) the Indigenous leaders decided to give in to the company’s demands in order to protect their people. However, the affected villages themselves–who previously erected markers on their land to prohibit the presence of PT Mayora–decided on an altogether different tact: They occupied the company’s offices, sending a clear message that PT Mayora is not welcome.

Indigenous communities in Sarawak, Malaysia, whose lands were flooded two years ago by the controversial Bakun Dam–forcing some communities to live on newly-created archipelagos–are facing yet another daunting challenge: The Malaysian government wants to convert the remaining Indigenous lands into a new national park. An announcement by the Sarawak government warns that all Native Customary Rights (NCR) will be ignored in order to make the park a reality.

The Oglala Lakota passed a resolution opposing the proposed Otter Creek coal mine and Tongue River Railroad in their historical homelands of southeastern Montana. The Oglala Lakota have thus far been excluded from any consultations despite the fact that the proposed mine site is an area of great cultural and historical significance containing countless burial sites, human remains, battle sites, stone features and artifacts. In addition to calling for proper consultation, the Oglala Lakota have called on all Tribal Nations who signed the Fort Laramie Treaty to stand with them in opposing the mine and railroad.

The Indigenous Peoples’ Front of Tripura (IPFT) renewed its demand for recognition of India’s Tripura Tribal Areas Autonomous District as an independent state. Justifying the demand, IPFT general secretary Aghore Debbarma said in an interview with Times of India that, without an autonomous state, the Tripura Peoples will continue to be deprived because of the government’s continuous withholding of funds for tribal areas. Budhu Debbarma, a senior tribal leader, also said that, the government is failing under Schedule 6 of the Constitution to safeguard the culture, tradition, language and lands of the indigenous people.

The Buffalo River Dene Nation is moving forward with a plan to reclaim a vast area of traditional land that was seized by the Canadian government in 1953. As reported by the Dominion, the area–Spanning 11,700 square kilometres along the Alberta-Saskatchewan border–has been used for the past 60 years as a tactical bombing range; however, it is now being opened up to oil and gas extraction activities and an Enbridge pipeline. The Buffalo River Dene, who were evicted from the area, have simply had enough.

The Nahua Peoples in the Peruvian Amazon announced that they will refuse to allow a gas consortium led by Pluspetrol to operate in their territory. In a letter that was delivered to the Ministry of Culture in Lima, the Nahua stated that, “Given the repeated broken promises by the company Pluspetrol, our people have decided to prohibit it from operating in our ancestral territory in the headwaters of the River Serjali.” Pluspetrol is currently waiting for government permission from the Ministry of Energy and Mines to explore for deposits by drilling 18 wells and conducting intensive seismic tests in the headwaters region of the River Serjali, which the Nahua consider to be their territory.

In Sapmi–the traditional territory of the Saami Peoples–a group of indigenous and non-indigenous activists set up a roadblock to stop the UK-based mining company, Beowulf, from carrying out another drilling program in Kallak (Saami: Gállok), an area of great spiritual and cultural importance to the Saami Peoples. The blockade has been dismantled on several occasions; however, that hasn’t deterred the activists from continuing to defend Sapmi.

Kenya president Kenya Uhuru Kenyatta and Vice President William Ruto forestalled the escalation of a long-running Maasai-Kikuyu conflict that was ignited after a July raid left 250 Maasai houses burnt and over 2000 families homeless in Naivasha County, Rift Valley Province, Kenya. Following the attempted eviction, the Maasai issued a list of demands and a strongly-worded warning that their demands must be met, otherwise the country should brace for an all-out exodus of Kikuyus from any part of Maasailand in Kenya. Both the President and Vice President quickly intervened by offering the victims compensation and setting up a committee to look into the conflict.

The Murrawarri Peoples took their first steps toward becoming an independent republic on their traditional unceded lands in northern New South Wales and Queensland, Australia. After issuing a formal declaration, The Murrawarri established an interim government in preparation for a parliament that will consist of 54 representatives appointed by their respective ancestral family groups. The Murrawarri Nation’s act of self-determination has caught the attention of at least 27 other Indigenous Nations in Australia who have requested Murrawarri’s declarations and constitution to use as templates for their own independence movements.

Rage against Empire – Glen Coulthard (Dene) sits down for a 60-minute talk on Resentment, Reconciliation and Indigenous Decolonization in Canada.

In a forest of Gods – Dokri of the Dongria Kondh Peoples describes the meaning of a forest to the Indigenous Peoples of the remote hill range of Niyamgiri in the state of Odisha, India.

The March on PKOLS – Made You look Media highlights the May 22 restoration of PKOLS (pronounced p’cawls), an historically-important meeting place and a part of the WSÁNEC Nation’s creation story, located in what is now the municipality of Saanich in British Colombia, Canada.