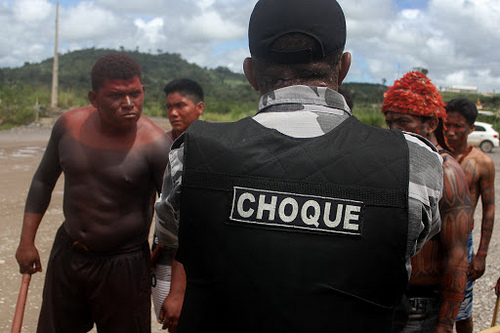 After years of community opposition, the controversial plan to ship radioactive waste across the Lakes and the Atlantic Ocean to Sweden was officially cancelled by the Swedish company, Studsvik. In a rare show of unity, opponents to the plan included City mayors, U.S. Senators, environmental and nuclear groups, indigenous communities and other civil society groups.

Twenty West Papuan women jumped into a police truck as Indonesia’s police forces prepared to take three men and six women to jail at a pro-independence rally in Jayapura. A witness told West Papua Media that “the police were confused” by the women’s spontaneous response and immediately released the seven detained activists.

Hundreds of Indigenous Peoples gathered at an oil palm plantation in Malaysia to protest against a recent Federal Court decision to dismiss a disappointing ruling by the Court of Appeal (CA). The CA ruled that the communities of Long Teran Kanan, Tinjar have no Native Customary Rights (NCR) over lands that were given to a Malaysian company for the development of an oil palm plantation. A similar demonstration was carried out days later by another group of affected villagers.

In Naivasha, Kenya, over 200 youths believed to be members of the criminal organization Mungiki–under the escort of heavily armed police–descended on the Maasai community in Narasha, burning and destroying more than 200 houses. The arsonists, who were protected by the armed police, rendered 2,300 people homeless, killed over 20 calves and over 600 lambs. During the raid, 2 elderly Maasai men sustained bullet wounds as well as cuts from machetes; they are now recuperating in hospitals.

The Belize Court of Appeal re-affirmed the Maya people’s rights to collective land ownership throughout southern Belize. This decision came just days after the Government gave US Capital Energy permission to conduct oil drilling inside the Sarstoon Temash National Park, the entirety of which is Maya ancestral land. The government of Belize is now being urged to end its persistent denial of the Maya’s land rights and to implement the court decisions.

The US Defense Department has agreed to fund the latest Bowman Expedition led by the American Geographical Society and the University of Kansas Geography Department. Like the first – and controversial – Bowman expedition to Mexico, this latest venture will target indigenous communities throughout Central America. The Expeditions are little more than intelligence gathering efforts carried out by civilian professors and their graduate students.

In a precedent-setting ruling that has national and international implications, Ontario Superior Court Justice Carole Brown ruled that a group of lawsuits against the Canadian mining company HudBay Minerals can proceed to trial even though the plaintiffs are from another country. The Maya Qeqchi turned to Canada’s court system over three separate injustices including the gang rape of 11 Maya Qeqchi women.

The BriBri community of Alto Cuen in Costa Rica reported that a group of people dressed in army fatigues touched down in unidentified black helicopter, toured their land for several days and then simply left. According to the Bribri, the group, who spent most of their time touring the area, claimed to be “evangelist missionaries”. They were carrying sophisticated mountain gear, GPS, cameras, weapons, land surveying materials and metal detectors.

The Honduran Army opened fire on members of the Lenca community of Rio Blanco as they prepared to mark 106 days of resistance to the building of Agua Zarca hydroelectric dam. Tomas Garcia, a Lenca leader and member of the National Council of the Civic Council of Popular and Indigenous Organizations of Honduras (COPINH) was killed during the attack; his son was also seriously injured. Berta Caceres, leader of COPINH, described the act as “a desperate and criminal reaction”. She also explained that the community has decided to continue occupying access to the dam.

Yaqui Traditional Authorities initiated a road block on international highway 15 near the community of Vícam, in Sonora, Mexico. The action was in response to the state government’s refusal to stop the operation of the Independence Aqueduct which began to illegally extract water from the Yaqui River in March. The Yaqui are heavily dependent on the water from the Yaqui River, a fact that was identified in a Supreme Court (SCJN) resolution which ratified protection for the tribe pending an Environmental Impact Assessment (MIA), which is required to legally begin taking the water.

In Mexico, Wixarika leaders filed an injunction to stop the illegal exploration for gold and silver in their ancestral sacred lands of Wirikuta. The injunction was prompted by the Mexican government’s refusal to even so much as acknowledge the Wixarika Regional Council for the Defense of Wirikuta, which has been petitioning for government intervention since early March. The Council says that drilling and excavation is occurring on a wide and destructive scale, even though permits have not been issued.

Villagers in Natonin, a municipality in Mountain Province, Philippines, called on the National Commission on Indigenous People (NCIP) to notify the Philippine Army’s 54th Infantry Battalion to pull out from their territory. The Residents say that a massive military operation is violating their indigenous and human rights. According to the villagers, soldiers are entering homes, stealing medicines, and destroying property. Some villagers, dreading a confrontation, are refusing to even leave their homes to tend to their fields.

Representatives of Indigenous and creole community groups in Nicaragua called on the country’s Supreme Court to repeal a controversial law that permits the construction of The Inter-Oceanic Nicaragua Canal. The law in part granted the Hong Kong company HKND the right to determine on its own the technical, economic and environmental viability of the US$40 billion project, which dwarfs the Panama Canal. The Indigenous and creole community groups argue that they were not sufficiently involved in the decision-making process.

The international community finally took notice of Israel’s plan to evict 40,000 Bedouin citizens from their ancestral land in the Negev desert. The sudden leap of awareness came after the Israeli Knesset (legislature) held its first reading for the controversial “Bill on the Arrangement of Bedouin Settlement in the Negev,” a piece of legislation that outlines the framework for implementing the equally controversial Prawer-Begin plan. During the Knesset reading, some Arab ministers tore up copies of the proposed bill to demonstrate their opposition. Since then, global opposition to both the Begin Plan and the new Bill has grown exponentially.

The Lakota Group Defenders of the Black Hills have written legislation that would establish a moratorium on any new licenses for uranium exploration or mining until all abandoned mines across the United States have been cleaned up. The legislation is largely in response to the 2,885 abandoned open-pit uranium mines located within the area of the 1868 Fort Laramie Treaty and the 1,200 abandoned uranium mines in the Navajo Nation.

A Place Without People – Few people know that, when the Serengeti National Park was created in the 50s and 60s, the Indigenous Peoples who had lived there in harmony for at least 3000 years, were thrown out. Fifty years later, the government of Tanzania, the tourist industry and conservation organizations, continue to advance the idea that the Maasai Peoples are intruders on their own ancestral land.

We are the Wind – This documentary focuses on the realities and opinions of the peoples of the Isthmus of Tehuantepec (Oaxaca, Mexico), giving voice to those who are coming together in resistance to the controversial San Dionisio del Mar Wind Farm project.

Saskatchewan: Toxic Waste Dump? – A 27-minute educational film about the various agencies involved in colonial waste management in Canada. This low-budget independent film takes viewers to the front-line of the back-end of the nuclear industry.