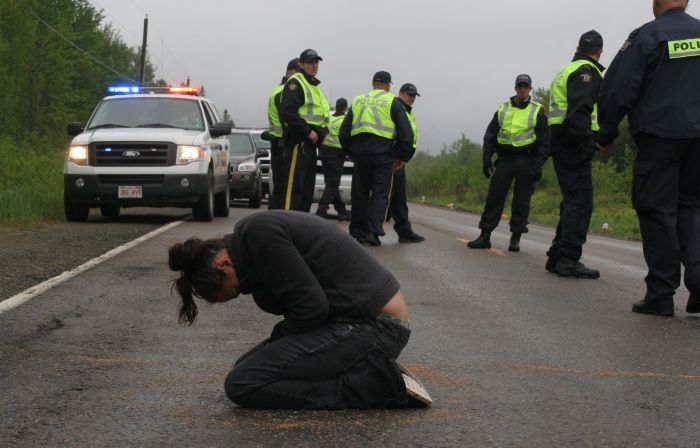 Three Nahua-Otomi communities are facing dispossession from their lands by a consortium of mining companies in Colima, Mexico. According to the Mesoamerican Movement Against the Extractive Mining Model (M4), the consortium Peña Colorada wants to gain control of the Nahua-Otomi lands so it can be used as mine waste dump site. M4 is urging people to contact government officials to stop the expulsion.

The Yinka Dene Alliance gave the employees and contractors of Enbridge Inc. and Enbridge Northern Gateway Inc. a final warning not to trespass on their collective territories without permission. “Any unauthorized entry onto our lands”, the warning states, “will be considered trespass and prosecuted accordingly”. Yinka Dene Alliance includes Nak’azdli, Nadleh Whut’en, Takla Lake, Wet’suwet’en, Tl’azt’en and Saik’uz First Nations in northern BC who formally banned Enbridge from their territories within the bounds of customary law.

Indigenous Youths in the Valle de Sibundoy, Colombia, are standing up against a road to Brazil that would cut through their territory, including an ancient pathway used by their ancestors. Some indigenous campaigners in the valley tried to assert their right to be consulted over the project; However, they say that the government responded by claiming that their community did not exist. The valley is home to the Inga and Camentsa Peoples, who do not presently hold any communal title in the area.

Santa Ysabel Tribe of Kumeyaay Indians became the first Indigenous Nation in California and the fifth Nation in the United States to affirm marriage equality for its citizens. Santa Ysabel Tribe joins the Coquille Tribe of Oregon (2008), Suquamish Tribe of Washington (2011), Little Traverse Bay Bands of Odawa Indians in Michigan (2013), and Pokagon Band of Potawatomi Indians in Michigan (2013) in supporting marriage equality.

Weeks of peaceful protests in Kent County, New Brunswick, have resulted in the arrest of at least 30 Indigenous and non-Indigenous activists and concerned citizens who are trying to stop a seismic testing project owned by SWN Resource Canada. The protesters recently welcomed a team UN observers who arrived just days after being called; however, that has done little to sway police from trying to crush the protest. Most recently, police arrested a reporter from the Media Coop and a prominent anti-shale gas advocate from Elsipogtog First Nation.

The Council of Yukon First Nations (CYFN) passed a resolution declaring their traditional lands to be “frack free” and calling on the Yukon government to prohibit all fracking in the territory. The CYFN represents eleven of the fourteen First Nation governments in the Yukon Territory.

Large tracts of pristine coastal land in the Comarca Ngäbe-Buglé in western Panama have been sold to foreign developers, including Costa Rican businessman and politician, Antonio Álvarez Desanti. According to an investigation by one of Panama’s national newspapers, La Prensa, the land was originally acquired through a process of “prescripción adquisitiva de dominio” (uninterrupted possession) which normally requires years of continuous occupation; however, in this case, the process lasted only “months”. A regional Ngäbe meeting is being prepared to discuss the situation, particularly a development project that Desanti has proposed.

Pressed by two months of resistance, the Brazilian Government finally suspended the construction of hydro dams in Tapajós River region. The Munduruku Peoples organized a multitude of actions including two occupations that paralyzed construction of the Belo Monte hydroelectric power plant for a total of 17 days. They also halted the Tapajós study group which intended to carry out unsanctioned studies on rivers Tapajós and Teles Pires, where 13 thousand Munduruku people live. While the Munduruku welcomed the government’s decision, they are considering it as nothing more that a partial victory. States the head of the Munduruku Paygomuyatpu, “We will continue in our struggle… We want the studies and works to be cancelled.”

The EZLN, in honor of a highly-respected Purépecha leader, announced the creation of a traveling Indigenous seminar that will provide a forum “in which the Indigenous Peoples of the continent can be heard by those who have an attentive and respectful ear for their word, their history, and their resistance.” The announcement was support by more than 30 Indigenous organizations and governments.

The Eastern Band of Cherokee Indians (EBCI) and the Land Trust for the Little Tennessee (LTLT) celebrated the final return of the Hall Mountain Tract to tribal hands. Hall Mountain, a 108-acre tract of land, is the viewshed of the historic Cowee Mound site located six miles south of Franklin. The Mound, a site of great cultural significance to the Tribe, was the largest, busiest diplomatic and commercial center for the Cherokee people and all Native people on the East Coast until the late 1700s.

San communities in Botswana won a significant court victory in their struggle to remain on their ancestral land, obtaining a temporary injunction against their eviction. The court, which convened as trucks filled police arrived to intimidate the San, ruled that no government officials can enter the San’s compounds without their consent and that the San’s lawyers must be notified before any further attempt is made to resettle them. The government tried to remove the San because they live in an area that the government wants to define as a wildlife corridor.

The Malian government accepted a deal that was signed by two main Azawadi organizations, the National Movement for the Liberation of Azawad (MNLA) and the High Council for the Unity of Azawad (HCUA). According to the deal, the Malian army will be redeployed in Kidal, a part of the region that the Tuareg MNLA declared independent in 2012. The MNLA lost control of the territory to several Islamist groups, leading the French army to intervene in the conflict, however, to restore Malian control over Azawad. The MNLA subsequently managed to regain control of Kidal, until the Malian army threatened to retake the area by force. The MNLA is now only asking for an autonomous Azawad within Mali.

The Guna General Congress in Panama made the historic decision to reject all REDD+ projects in the Gunayala territory. Alongside this rejection, the Congress also rejected a proposed REDD+ pilot project in the region, after 2 years of public consultations.

After 38 years of work, the US government affirmed the water rights of Klamath Tribes in southern Oregon, declaring that the tribes’ water rights have existed since “time immemorial.” The decision is still subject to court challenges, however, it gives tribes–who are strong advocates for salmon and other fish–a key advantage in one of the most persistent “water wars” in the country.

An historic ceremony was held outside the Victorian Trades Hall in Melbourne, Australia for the issuing of “Original Nations” passports and West Papuan visas in conjunction with the West Papua Freedom Flotilla. The flotilla convoy, which will travel from Lake Eyre to West Papua, aims to highlight the abuse of human rights and land rights occurring in West Papua and reconnect the Indigenous Peoples of West Papua and Australia.

Indigenous Peoples in the Province of Kalinga, Philippines, blocked a mining company, Carrascal Nickel Corporation (CNC), from entering their ancestral lands. Discussing the action with Northern Dispatch, a Balatoc woman said that the company failed to obtain the necessary FPIC before commencing with any mining in the area. Instead, the woman explained, CNC acquired signatures of several community members during routine medical missions before entering into an agreement with two individuals claiming to be Tribal leaders.

The Manitoba government, in a highly disturbing move, took legal action against four First Nation communities that were intentionally flooded in 2011 to protect non-native property in the Province. The four First Nations–which includes the now-displaced community of Lake St. Martin–previously filed a $950 million class-action lawsuit against the government for ‘mishandling’ water control operations resulting in the flooding of their lands.

Leaders and citizens of the Mapuche nation, as well as a pro-Mapuche Chilean Activist, have approached the Inter-American Court in an effort to stop the violence stemming from Chile’s implementation of the so-called “Anti-Terrorist Law.” The Pinochet-era law has effectively criminalized Mapuche struggles, bringing wave after wave of injustice to the Mapuche, including raids, unjust imprisonment, attacks on women and children and an immeasurable loss of life. The injustice has also spread to the judicial system with several discriminatory policies that compound the problem.

Guarda Bosques – In “Guarda Bosques” (Forest Keepers), you will learn about the Purepecha’s efforts to reclaim and defend itself from organized crime thugs teamed up with the logging industry and different government agencies.

Wanorazi Yumneze – “Wanorazi Yumneze” is a documentary film that aims to begin a much-needed conversation between indigenous and non-indigenous peoples in Canada about how people, wildlife and the environment are impacted by industrial developments.

Our Back Is To The Wall – In this powerful short film by Great Plains Tar Sands Resistance, Ponca elders Carter Camp and Casey Camp-Horinek describe the devastating legacy of oil exploitation in their communities and the desperate push to carry forward the Keystone XL pipeline.

Nua Rapa Nui – A Chilean-Belgian-English co-production, Nua Rapa Nui is an upcoming documentary film about the history of the Rapa Nui peoples and the ongoing struggle to recover their ancestral lands.

Intercontinental Cry Magazine needs your help! We have until July 19 to raise $2400 so that we can pay off unpaid bills and secure our work for the rest of the year! Please check out our Indiegogo campaign to learn more and donate! We can’t do it without you! http://www.indiegogo.com/projects/people-land-truth/