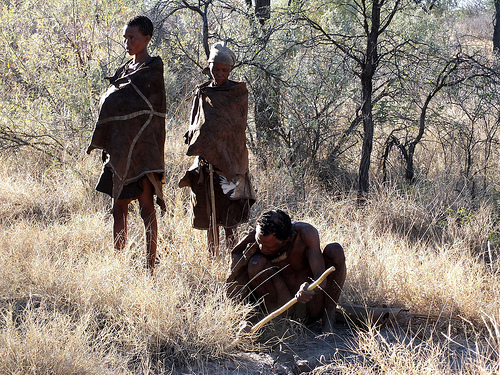 Photo by hobgadlng on flickr (CC BY-ND 2.0)
Support our journalism. Become a Patron!

In this month’s Underreported Struggles: a shocking report on Genocide in Brazil reappears after being ‘lost’ 40 years ago; Tahoe Resources security chief is ‘caught on tape’ ordering the assassination of Indigenous activists; The Gwich’in Nation speaks out against Alaska Governor’s $50 million dollar drilling proposal in the Arctic National Wildlife Refuge.

Citizens of the Secwepemc, Ahousaht and Tla-o-qui-aht Nations joined up with members of the Wilderness Committee, Friends of Clayoquot Sound, Clayoquot Action and others to confront Imperial Metals at their Annual General Meeting (AGM) in Vancouver, British Colombia. Among the many concerns raised at the protest were two controversial mining projects that Imperial wants to build in two different Indigenous territories within the Clayoquot Sound UNESCO Biosphere Reserve.

After being ‘lost’ for more than 40 years, a shocking report into genocide, torture, rape and enslavement of indigenous peoples during Brazil’s military dictatorship has re-surfaced, raising fresh questions about whether the government has made amends and punished those responsible. The 7,000-page Figueiredo report–believed to have been destroyed by a fire at the agriculture ministry–reveal hundreds of severe crimes and many of its perpetrators. The report is now being examined by the National Truth Commission, which is investigating human rights violations between 1947 and 1988.

A group known as the Belize Territorial Volunteers recently discovered several large agricultural developments and one large pasture field encroaching on the Guatamala-Belize border. Just before making the discovery, the BTV, which was joined by at least one local Maya resident, unexpectedly met representatives from the Organization of American States (OAS) who alleged that the group had reached the borderline and warned them not to proceed any further. The group pushed on after realizing they had not in fact reached the border.

Indigenous Peoples in southern Botswana breathed a sigh of relief after Botswana’s High Court suspended a planned community eviction by local authorities. The government alleged that the community, which lives in a so-called ‘Wildlife Corridor,’ is blocking the free movement of animals in the region. The High Court ruled that the eviction be suspended until at least mid-June, when the “San” Bushmen will be forced to return to court to defend their land.

New Zealand’s government signed a rare agreement with the Maori, recognizing it historically acted “unjustly” and offering a combination of financial and cultural redress–a true act of reconciliation for the Maori. The signing took place on a site south of the city of Hamilton, where in 1863 Tamihana reached out to the invading British forces in a gesture of peace.

The U.S. company Herakles Farms finally succumbed to local and international pressure, halting development of its 60,000 hectare palm oil plantation in the middle of the Cameroon rainforest. The move came just weeks after an order from the Forestry Ministry to cease ‘preparing land’ near its Talangaye palm oil nursery pending an assessment of the public usefulness of the project to the region. As noted on IC in 2011, the project threatened the ancestral lands and livelihoods of the Baka, Bakola, Bedzang and Bagyeli peoples.

The Asian Human Rights Commission (AHRC) issued a warning that soldiers from the Philippine Army were “harassing and preventing indigenous villagers, who were displaced en masse last month due to an armed conflict, from getting access to their farms to harvest crops”. According to the AHRC, the soldiers imposed heavy restrictions on the villager’s movements under the pretext of ensuring their safety. The AHRC urged the international community to write letters urging relevant authorities to conduct a full and impartial investigation into the allegations and to order the soldiers to cease their repression.

Indigenous Peoples from Cauca, Colombia, urged FARC leader “Timochenko” to arrange a personal meeting with their leaders over ongoing guerrilla aggression in the conflict-ridden region. After responding to various assertions by FARC–including ‘ninety’ claims that the indigenous people are a ‘counterinsurgency force’–the indigenous called for urgent direct talks to address the continued killings, accusations and divisions by FARC.

The SAVE Rivers network along with 300 indigenous people from around Sarawak gathered in protest outside the Borneo Convention Center Kuching where the International Hydropower Association’s biennial congress was being held. The protesters–which included several community members affected by the Bengoh, Murum and Bakun dams–left peacefully after they managed to reach the main entrance of the BCCK and get their message across to IHA, Sarawak Energy and the Sarawak Government: that they are open to development, but not at the expense of their ancestral lands and their ways of life.

The Gwich’in Nation spoke out against Alaska’s Governor Parnell’s $50 million dollar drilling proposal on the Coastal Plain of the Arctic National Wildlife Refuge. In a public statement, the Gwich’in explained that their way of life is “dependent upon the Porcupine (River) Caribou Herd whose birthing and nursery grounds are on the Coastal Plain.” The Gwich’in also observed that the Refuge is presently closed to any and all drilling “and it would take an act of Congress to open it.”

Police in Belize launched a full investigation into the demolition of “Nohmul” a Maya pyramid mound located some 80 kilometers northwest of Belize City. According to statements, De’ Mar’s Stone Co. picked the pyramid to use as road fill after the chairman of Douglas Village, where the company was building and repairing roads, didn’t like the material they showed him. The 30-meter high pyramid–part of the Noh Mul ceremonial center–was reduced to a small mound of debris.

Indonesia’s top court issued a welcomed ruling that the customary forests of Indigenous Peoples should not be classified as ‘State Forest Areas’, paving the way for a wider recognition of indigenous peoples’ rights in the archipelago. The judgment of the Constitutional Court in Jakarta came in response to a petition that was filed by the national organization AMAN (Aliansi Masyarakat Adat Nusantara) some two years ago.

Guatemala’s Public Ministry revealed wiretapping evidence that identified a Tahoe Resources security chief giving direct orders to assassinate indigenous opponents of the Escobal mining project. For months, Tahoe Resources claimed to have no part whatsoever in the murders and kidnappings of Xinca community members who were working to stop the Escobal silver mine. Days after the revelation, a second Tahoe employee was implicated in the violence.

Indonesian police in Jayapura, West Papua, violently dispersed a pro-independence rally organized by the West Papua National Committee (KNPB). The rally was being held to commemorate the shootings and violent crackdown by Indonesian security forces on peaceful demonstrations across Papua on May 1, which left four people dead and drew international condemnation up to the UN Human Rights Commissioner, Navi Pillay.

TransCanada filed a lawsuit in the US to prevent individuals from resisting the construction of the southern leg of the controversial Keystone XL pipeline. Clearly a response to the “Protect the Sacred” international Treaty gathering along with “Moccasins on the ground” and similar activism training camps, the new lawsuit seeks to prevent a number of named defendants from “trespassing or interfering with construction” as well as prohibit them from “organizing, communicating, encouraging or inciting resistance” to the Keystone XL.

The Supreme Court of Canada, meanwhile, ruled that individual members of an Aboriginal community cannot use blockades or other so-called “self-help” remedies to address government breaches of law, specifically its duty to consult. The court was addressing a camp blockade that was set up in 2006 to interfere with a logging operation on Treaty 8 territory that was authorized by the Crown. According to the judge, the protesters, who claimed (but failed to “prove”) that there was no prior consultation, “should have” sought to address the license issued by the Crown, not the license holder (ie, the company benefiting from the Crown’s allegedly illegally issue of consent to harvest the traditional territory of Fort Nelson First Nation).

A healing and prayer ceremony was held at the site of the Hiawatha Indian Insane Asylum in South Dakota, where the Bureau of Indian Affairs committed Indigenous People with purported mental illnesses from 1902 to 1933. A total of 121 people languished and died at the facility–their remains buried in a cemetery that is now a part of the Hiawatha Golf Course.

An Alabama Grand Jury rejected the absurd terrorist charge against Muscogee (Creek) protester Wayland Gray, who was arrested along with three other men on February 15, for attempting to access the Hickory Ground ceremonial ground in Wetumpka, Alabama. The men had been seeking to pray for their ancestors who were excavated by the Poach Band of Creek Indians to construct a gambling facility.

According to a report by the Hawaii Free Press, important sacred sites in Hawaii are being irreparably damaged by the Hawaii Community Development Authority (HCDA) in order to develop a new photovoltaic power station (aka, solar energy farm). One such site, known as “Leina a ka Uhane” was considered to be spiritual leaping point for spirits returning to the Tahitian homeland. The area was well documented in the Hawaiian chants of Hi’iaka going back nearly 1000 years. The HCDA, a State agency, is allowing construction work to take place “Without archaeological surveys or supervision.”

An Indigenous Congressman in Nicaragua warned that tensions between Indigenous Peoples and mestizo “colonists” have reached a boiling point following the recent assassination of Mayangna leader Charley Taylor, who was killed April 24 while trying to defend his land from a group of mestizo invaders. “This is a critical moment,” the Congressman told The Nicaragua Dispatch. “The colonists are promoting violence and the indigenous people are mobilizing groups to defend their land. There could be more bloodshed and more death.”

The Bedouin People–still widely ignored by the international community–are continuing to resist Israeli efforts to force them off their lands. The government wants to move the Bedouin to various settlement blocks which are totally inadequate for grazing; and in some cases, located between restricted areas including an Israeli closed military zone, and a Palestinian Authority security forces training area. The Israeli government claims that moving the Bedouin from their current location will greatly improve the quality and level of services they receive.

Waste Water – Addresses the concerns surrounding the use of treated sewage effluent at the San Fransisco Peaks, including its impact on Native American religious freedoms, human health and the environment.