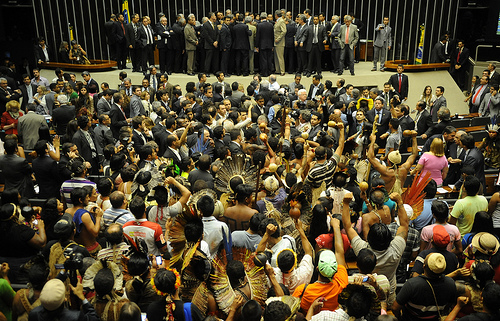 The traditional chiefs of Collingwood Bay in Papua New Guinea’s Northern Province filed a complaint with the Roundtable on Sustainable Palm Oil (RSPO) accusing the Malaysian Company, Kuala Lumpur Kepong, of acting contrary to the RSPO Code of Conduct, Certification Systems and Principles and Criteria. In their detailed submission to the RSPO, they note how they have actively opposed oil palm developments on their lands since 2010. Rejecting options of mediation, the chiefs insist that the company desist from developing oil palm on their lands.

The USDA Cibola National Forest Service (CNFS) issued a controversial Draft Environmental Impact Statement (DEIS) to Roca Honda Resources (RHR), for a proposed uranium mine on Mount Taylor, a stratovolcano in northwest New Mexico. The DEIS openly states that uranium mining at Mt. Taylor–which is held sacred by several Southwest Nations including Dine’, Hopi, Acoma, Laguna, and Zuni– “…would result in the disruption, alteration, and displacement of traditional cultural activities that are critical to the continuity of cultural beliefs and practices of these tribes.”

Esquimalt First Nation, in an effort to reform the monetary system, unveiled a new barter currency on their territory known as Tetlas. Similar to a gift certificate, the Tetla was developed by the organization Tetla Tsetsuwatil to assist economic development in the S’amuna’ Nation and other native nations, and to encourage trade with non-natives and among non-natives. So far, 35 businesses have signed on to the Tetla system.

A joint project involving the municipal government on Rapanui (Easter Island), the Chilean national forestry corporation (CONAF), and the Inter-American Development Bank, will restore a number of the Rapa Nui Peoples ancestral gardens in order to preserve their traditional form of agriculture, promote cultural education, and increase ethno-tourism on the Island.

The African Court on Human and Peoples’ Rights issued provisional measures to ensure that the Ogiek people of the Mau forest cannot be evicted by the Kenyan government, while the matter continues before the court. The Ogiek case is the first indigenous rights case to come before the court since it began in 2006 and sets a strong precedent against the eviction of Indigenous Peoples from their lands across continental Africa.

The O’odham Nation is taking action to officially oppose Kinder Morgan’s proposed Sierrita Pipeline, a project that could harm up to 60 “sacred and significant” cultural resource sites, village sites, trash mounds and quarries, according to a resolution approved by the Tohono O’odham Legislative Council. The pipeline would also harm Baboquivari Peak, an area central to the O’odham Peoples creation story.

Indigenous allies crashed a private meeting in Calgary that was organized by the government of Ecuador to promote its upcoming 11th Round of oil concessions. The oil auction, announced last November, includes vast swaths of territory traditionally used by 5 Indigenous nationalities in the Amazon region. At the meeting, the allies delivered a declaration on behalf of the affected Indigenous Peoples that they do not consent to oil drilling on their lands. The meeting was attended by Ecuadorean government officials, Canadian investors and oil-company executives.

A federal court in Brazil suspended the use of military and police personnel while technical research is carried out on the controversial São Luíz do Tapajós Dam in the Brazilian Amazon. The military and police were brought in to stamp down protests from indigenous people living along the Tapajós River, but the judge decreed that impacted indigenous groups must give free, prior, and informed consent (FPIC) before any further studies can be done on the proposed dam.

Also in Brazil, approximately 700 indigenous leaders occupied the country’s House of Representatives in a concerted effort to stop the nomination process for the Special Committee on PEC 215, a proposal that would transfer from the federal government to the National Congress the authority to approve the demarcation of traditional lands. Despite a heavy-handed response from police officers and security personnel, the Indigenous leaders held their ground until the government representatives took appropriate action.

To Hopis’ dismay, several dozen culturally and spiritually significant masks were sold off at the Neret-Minet Tessier & Sarrou auction in Paris, France. The Hopi had filed an injunction against the hotly contested auction; however, the court reject their appeal, stating that, while the Hopis ascribe “sacred value” to the masks, “clearly they cannot be assimilated to human bodies or elements of bodies of humans who exist or existed.” The masks were taken from Hopi during the 1930s and 1940s.

Ashéninka indigenous leaders in Peru called on authorities to guarantee their safety after receiving alleged death threats from irate loggers whose wood was impounded by National Police agents and investigators from the country’s environmental crimes prosecutors office. Members of the Alto Tamaya-Saweto indigenous community aletered the authorities that the wood had been illegally taken from their territory.

In Guatemala, the Canadian mining company Tahoe Resources received a mining license for its Escobal mining project despite ongoing violence against indigenous Peoples, including the unresolved kidnapping of four Xinca Leaders, one of whom was brutally murdered. More criminal acts were carried out on the same day the license was issued: Three shots were fired at the offices of the Center for Legal, Environmental and Social Action (CALAS) while its director was inside. A lawyer from this same organization also discovered that his home had been raided. The lawyer insisted that it was a direct message from the mining company, because, “we have participated in the entire legal process against the mine and are accompanying the consultations that are taking place in the communities.”

An anti-indian conference was held at the Lakeway Inn in Bellingham, WA about ten miles from the Lummi Nation. The April 6th event, which went by almost completely unnoticed, was dedicated to teaching people how to fight casino gambling, water rights, fee to trust, land acquisitions and sovereignty. The event was sponsored by Citizens Equal Rights Alliance or CERA, one of the most prominent Anti-Indian organizations in the United States. Three additional conferences are now being organized by CERA in Massachusetts, New York and Northern California as part of a new national offensive to end tribal sovereignty.

A Danish politician ridiculed a traditional Maori welcome to New Zealand, dubbing it an “uncivilised” ritual, and a “grotesque” mark of multicultural worship. Marie Krarup, a member of parliament for the Danish People’s Party, commented in the Danish newspaper BT that she was expecting a handshake or a salute; but she was instead greeted with a man who performed “strange rituals and poked his tongue out.” In the wake of a public outcry against the offensive comments, Krarup offered a lite apology claiming that it was a “mistranslation”. In a follow-up interview by BT, Krarup explained, “It sounds like I look down on the Maori. I do not do that, even though the culture is alien to me.” She then preposterously asked, “I do wonder, though, why the Maori culture is forced upon New Zealanders of European ancestry. It would be the same as if we here at home gave little girls scarves on their heads to appreciate Muslims.”

In northern Chile, Environmental groups and indigenous Diaguita communities celebrated a court decision to suspend the controversial Pascua Lama mine owned by the world’s largest gold mining company, Barrick gold. The court suspension was in response to a legal action that was brought forth by the affected indigenous communities who warned that the mine threatens their water supply and several local glaciers. Lorenzo Soto, a lawyer representing the Diaguita, said the suspension will remain in effect until the company addresses the pollution issue and properly consults the indigenous peoples.

Peguis First Nation along with Fisher River First Nation and several local cottagers blocked a road leading to the Berger Peat Mine in the interlake region of Northern Manitoba, Canada. The action was in response to the Manitoba government’s decision to uphold a license to Berger Peat Moss Ltd. and Sun Gro Horticulture Canada Ltd. despite a failure to adequately consult the first Nations about the many impacts that peat mining would have on their culture and Treaty Rights. Immediately after the government’s decision, Berger began to clear the forests and build roads in the project area; however, according to Peguis First Nation, the company did so despite key provisions in its license which stipulate that no land clearances or road construction can take place until a required plant study and inventory, including for medicinal plants, has been carried out.

Tens of thousands of Maasai people in Tanzania, are now facing eviction from their traditional lands so that wealthy tourists can use the area to shoot lions and leopards. The government of Tanzania recently proposed the creation of a 1,500 square kilometre “wildlife corridor” in Ngorongoro District right next to the Serengeti National Park, which was similarly cleared of its own indigenous population in 1959 by the British Government. Now, not only would the Maasai pastoralists lose their land, they would also be cut off from vital pastures and water, threatening the Maasai’s very existence. The Maasai are now in the process of lobbying Tanzania’s President to oppose the evictions.

Broken Valley – IC presents, “Broken Valley” a new documentary film about the controversial US-owned Chan 75 hydro dam and the pain and conflict the project has so freely dumped on the Ngäbe Peoples in Panama.

Life is still not ours – Learn the complex history of the Chittagong Hill Tracts of Bangladesh. Since the arrival of Britain in the 1800s, CHT has faced wave after wave of colonial exploitation. The horrid legacy continues even now through Bangladesh’s own National Government.

Salmon Confidential – A new film on the Canadian government’s cover up of what is killing BC’s wild salmon and what you might be buying in local grocery stores and restaurants (here’s a hint: salmon that’s infected with dangerous European viruses).