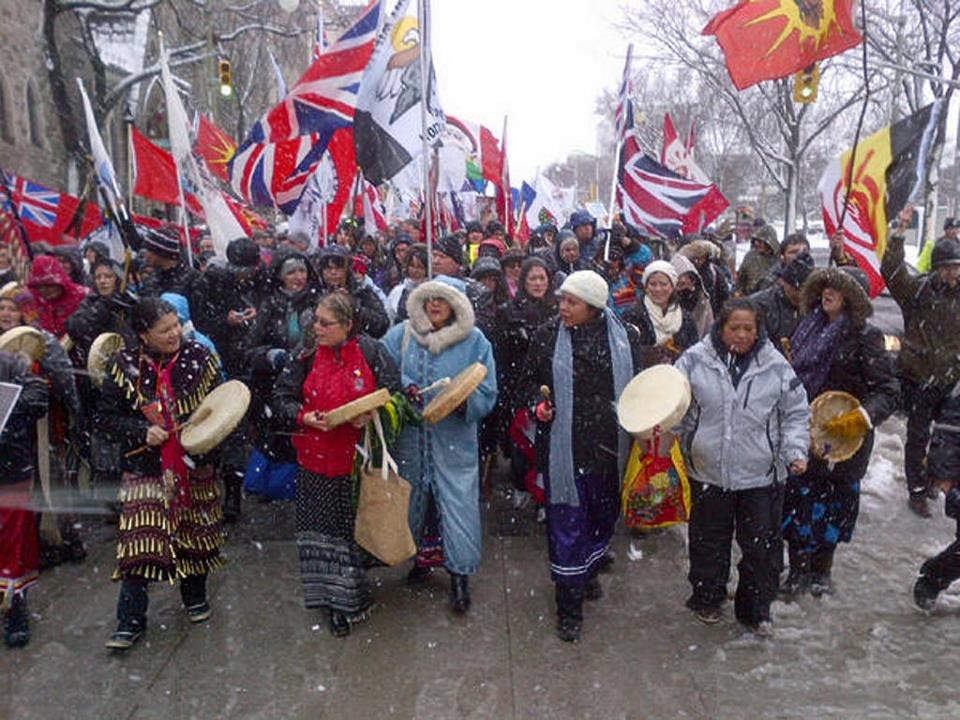 In this month’s Underreported Struggles: Taino Peoples adopt an historic Declaration of Unity; Masvingo Chiefs in Zimbabwe punished by court for taking too long to protect burial site; Thousands of Zapatista rise up to announce new era of struggle

The Yaqui in Sonora, Mexico said they will defend their rights to the Rio Yaqui, against the theft of water by the government of Mexico for the Independence Aqueduct, the largest engineering project in the state’s history. Yaqui representatives said that their People have first rights to the water from the Yaqui River, and that 98% of the population was not willing to accept the current project, which would take 634 gallons per second.

A group of Indigenous Peoples led by the Nepal Federation of Indigenous Nationalities (NEFIN) burnt copies of the Nepal’s 2011 National Census report expressing their dissatisfaction over it. NEFIN leaders demanded a recount and full transparency concerning the number of ethnic people and those speaking their mother languages. The existing statistics, NEFIN said, lessen the population and completely reject the existence of more than 10 distinct Peoples.

In Malaysia, two Kenyah longhouses erected a blockade against an oil palm company that encroached on their land in 1998, and never left. Since the company’s arrival, the two communities have incurred damages to their crops and properties without permission or compensation.

Nearly 70 indigenous leaders from Mato Grosso do Sul and various other regions of Brazil delivered the names of more than twenty thousand people to Brazilian authorities, who endorsed the petition “I support the Indigenous”. The unprecedented solidarity petition–which arrived in the midst of increasing violations of indigenous rights in Brazil–demonstrated a welcomed shift in attitude towards Indigenous Peoples by urban populations in Brazil and by the International community.

Revelations that Pinehouse was set to sign a “collaboration agreement” with uranium giants Cameco and Areva sparked outrage in northern Saskatchewan community. Some of the terms in agreement amounted to nothing less than a gag order that would protect the mining companies. As outrage grew and grew, Cameco and Areva announced that the final agreement would not include the controversial terms.

Mexican authorities banned Maya spiritual leaders from performing ceremonies at their ancestral temples to mark the widely-misunderstood end of the Maya long-count calendar. The government’s excuse for the ban was that the Maya intended to bring braziers and burn incense which “simply isn’t allowed”. Despite the prohibition, the Maya still carried out their ceremonies, which included prayers for renewal and an end to war, hunger and conflict.

The US departments of Agriculture, Defense, Energy and Interior signed a memorandum of understanding to start protecting sacred sites. The agreement came just a couple weeks after thieves made off with rock carvings from a sacred Paiute site in California’s Sierra Nevada. There was some question, however, concerning the seriousness of the inter-department pledge, given that more than three dozen sacred sites are currently threatened across the US.

Tibetans in Canada spoke out against the Canadian government’s controversial decision to sell the Canadian oil giant Nexen to a Chinese state-owned company that’s complicit in human rights abuses in Tibet. For three months, Tibetans and their Canadian supporters petitioned Ottawa and held weekly rallies against the possible sale of Nexen, which currently operates in the Tar Sands near Fort McMurray, Alberta.

More than 600 people from the district of Cañaris, province of Ferreñafe, Peru, blocked a highway and detained three geological engineers employed by the Canadian mining company, Candente Copper. The protest was undertaken in response to the Peruvian government’s failure to recognize a community vote in which 95% of participants rejected the company’s presence.

Masvingo Chiefs in Zimbabwe lost a court effort that sought to stop Econet Wireless from completing a new base station on the Sviba Hills in the Bikita of Zimbabwe. According to the Chiefs, Econet Wireless, a company headquartered in Johannesburg, South Africa, defiled a traditional shrine by exhuming human remains and destroying relics. The presiding judge dismissed the case because, apparently, the Chiefs took too long to act. Adding injury to insult, the judge also ordered the Chiefs to pay for Econet’s legal expenses.

A new nationwide movement was founded in response to Canada’s renewed efforts to radically alter inherent and treaty rights and further entrench the Indigenous population into Canada’s economy. The grassroots movement, known as #idlenomore, led hundreds of different actions, from public meetings to protests, blockades, hunger strikes, and ‘flash mobs’ in popular market centers. Despite the strong presence of Idle No More, Canada passed the first of eight controversial bills (Bill C-45) without blinking.

An Embera Chami community returned home to western Colombia despite major security problems on their lands, including uncleared land mines and ongoing military operations. As part of the Colombia government’s program to restore land to people displaced by armed conflict, the community recently received titles to lands they were driven from ten years ago. Since then, the community had been living as refugees in Bogota.

The United Confederation of Taino People (UCTP) and the Opia Taino of St. Thomas adopted a Declaration of Unity. The historic Taino treaty marked “a significant moment in our collective history” stated Roberto Mukaro Borrero, a UCTP representative. “We are affirming and honoring our ancestral connections across the region in an effort to promote our ancient Indigenous heritage to our present and future generations.”

Paramilitary police in Botswana severely beat two San (“Bushmen”) men, burying one in a shallow grave, after accusing them of hunting without permits in the Central Kalahari Game Reserve (CKGR). The two men were both successful applicants in a landmark court case six years ago that recognized the Bushmen’s right to live, and hunt, on their ancestral land. After winning that case, the government made the tribe’s life impossible, by unlawfully refusing to issue a single hunting permit.

The Yukpa shed light on their own struggle to reclaim ancestral lands in Venezuela, pointing out that President Hugo Chavez wasn’t to blame. As one Yukpa activist pointed out, “It’s the ministers.” The revelation offered a much needed counterpoint to continued unfounded claims that Chavez is working against Indigenous Peoples.

Reporters Without Borders (RWB) condemned Guatemala’s newly-adopted General Telecommunications Law (LGT), calling it “unjust and discriminatory” for “upholding a grave imbalance in the allocation of frequencies.” The new law, RWB said, “will leave the small radio stations created by indigenous (Maya and Xinka) communities, by Garifuna communities (those of African origin) and by mixed-race communities in permanent fear of forced closure and confiscation of their equipment.”

The Brazil government’s deadline passed for the removal of invaders in the Xavante Indigenous territory of Marãiwatsede. Rather than evading the lawful eviction, however, the government was said to be “doubling security” to remove the remaining non-indigenous occupants who are refusing to leave voluntarily.

A controversial consultation process came to a close in Bolivia with communities in TIPNIS, the Isiboro-Sécure Indigenous Territory and National Park. According to official data, of the 69 communities included in the consulta, 55 agreed to support a proposed highway and all but one rejected the park’s “intangible” status (which prohibits community development activities and megaprojects like the highway). However, Fernando Vargas, who leads one of three indigenous governing authorities TIPNIS, insisted that the official data is inaccurate, stating that, in many cases, community residents took part in the consulta without sanction from indigenous authorities who rejected (and did not take part in) the government process.

The Roundtable on Sustainable Palm Oil (RSPO) finally took action against First Resources Ltd., a Singapore-based company that’s spent more than 12 months clearing the ancestral lands and abusing the human rights of the Dayak Benuaq community of Muara Tae in Indonesia. The RSPO, a market-led non-profit, ordered the company to cease all developments on Muara Tae land, until such time that the conflict is resolved.

Bedouin citizens of the state of Israel started campaigning for democracy just as campaign posters popped up ahead of the country’s upcoming elections. Since 2009, they have been legally denied the right to elect their own representatives.

Thousands of Zapatista started marching in silence, entering at least five cities to announce a new cycle of struggle. The peaceful mobilization, which ended exactly as it began, was followed with a formal statement outlining the Zapatista’s next steps.

Back to Nature: The Battle For Hickory Ground – Directed by Sterlin Harjo, “Back to Nature” highlights the Muscogee (Creek) Nation’s struggle to defend a sacred area that is being razed by the Poarch Band of Creek Indians–for a Casino.

Noho Hewa: The Wrongful Occupation of Hawai’i – This independent film offers a contemporary look at Hawaiian people, politics and resistance to their systematic erasure. It is a raw, unscripted story that makes critical links between seemingly unrelated industries, and is told from the perspective of Hawaiians.

We are MANILAKBAYAN – An introduction to MANILAKBAYAN, a Mindanao People’s Mobilization for Land, the Environment, and Human Rights that brings voices of concern on mining affected communities and the attacks on environment defenders.