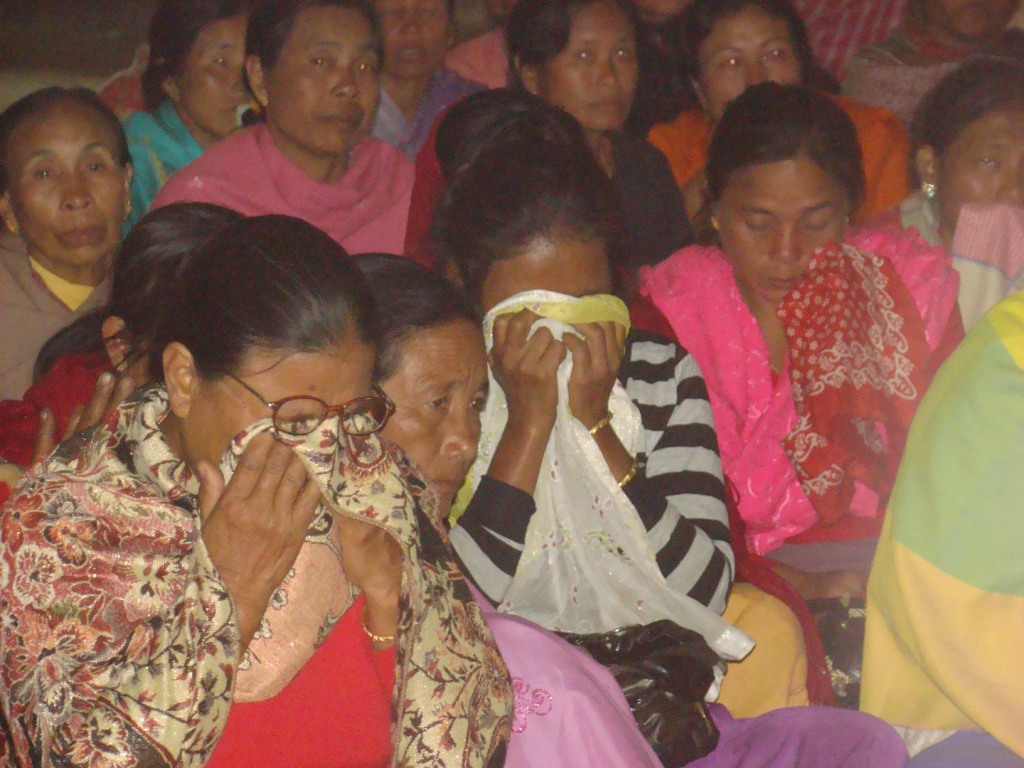 In this month’s Underreported Struggles: Gunmen in Brazil brazenly intimidating indigenous communities with a ‘hit list’ of prominent leaders; the Wixarika People face yet another threat to their sacred landscape in Mexico; Wet’suwet’en People evict pipeline drillers from their territory; the Belize government quietly grants oil company rights to Maya lands.

A new expert body at the United Nations, the UN Working Group on the issue of human rights and transnational corporations and other business enterprises, is seeking proposals from governments, NGOs, trade unions and other institutions to help establish the group’s priorities and activities. The Deadline for submissions is December 8, 2011.

At least four Saami communities are standing up to mining companies that want to exploit their customary reindeer grazing lands in Northern Sweden. Last week, two communities warned that the British mining company Beowulf is in breach of its own ethical guidelines for failing to engage them meaningfully, while it pursues a new iron mine on the grazing lands. Meanwhile, two other communities continue speaking out against Scandinavian Resources’ (SCR’s) proposed iron mines in the Kalix River Valley, less than 200km away from Beowulf’s proposed project.

Gunmen in Brazil are brazenly intimidating indigenous communities with a hit list of prominent leaders, following the high profile murder of Nísio Gomes last month. Reportedly employed by powerful landowners in Mato Grosso do Sul state, the gunmen are creating a climate of fear to prevent the Guarani People from returning to their ancestral land. As one Guarani leader told Survival International, “They’ve pinpointed us and they’re set to kill us. We’re at great risk. Here in Brazil, we have no justice. We have nowhere left to run.”

The Yindjibarndi Aboriginal Corporation (YAC) has accused Fortescue Metals of blocking elders from inspecting threatened sacred sites at the company’s Solomon Hub project. In the latest salvo in this long running battle between the YAC and Fortescue Metals Group, YAC head Michael Woodley has claimed that elders who were attempting to check sites at Fortescue’s Firetail lease, under threat from blasting, had been refused entry by security. The company has said that the YAC officials and elders were denied entry because they tried to bring a video camera on site, which is against company policy.

The Tribal Council of the Turtle Mountain Band of Chippewa Indians has passed a resolution that would ban hydraulic fracturing, or “fracking” on the North Dakota reservation. The resolution also calls for the council to protect “Mother Earth from any pollutants that may cause harm to its citizens, land, water, and air.”

A new piece of legislation has been proposed in the Dominican Republic that would effectively erase the country’s Indigenous population. According to a recent article on Dominican Today, the “Dominican Republic Electoral Law Reform” Bill identifies just three ethnicities for the country’s new citizen ID cards. Those ethnicities are Mulatto, black and white. While the country’s Indigenous population has been reduced by roughly 98 per cent since 1492 (according to some estimates) the Taino People continue to exist and struggle to reclaim their culture.

With the Wixarika People continuing to struggle against the threat of mining within their sacred landscape in the Mexican region known as Wirikuta, another area considered sacred by the Wixarika has been licensed out in concessions by the government. According to the Secretary for the Environment and Natural Resources (Semarnat), approximately 250 acres of beachfront property including the sacred area of Tatéi Haramara will now be developed for tourism.

The government of Belize has quietly granted an American oil company drilling rights to protected Maya lands inside the Sarstoon Temash National Park (STNP) in the Toledo District of southern Belize. The surreptitious move is in defiance of an historic Supreme Court ruling that confirmed Belize’s obligation to adhere to the international standard of informed consent, says the Sarstoon Temash Institute for Indigenous Management (SATIIM).

The Government of Manipur is in the process of burning down hundreds of floating huts (Khangpokshang) belonging to the Meitei Peoples in the Loktak Wetlands of Central Manipur. The Government blames the Indigenous Peoples of polluting the Lake; however, the Meitei say that any pollution there is really from the Loktak Multipurpose Hydroelectric Project. Nearly 200 floating huts have already been burnt. The remaining 1,132 huts face a similar fate.

Sagrada Terra Especulada (Sacred Speculated Ground), a Brazilian collective that advocates for indigenous land rights, is promoting a documentary and a petition in defense of the Pajé Sanctuary, close to Brasilia´s Pilot Plan. Real estate speculation threatens this area of savannah with the construction of a so-called “first eco-neighborhood in Brazil”.

An alliance of the Unist’ot’en (People of the Headwaters) and the Likhts’amisyu (Hereditary Chiefs) of the Wet’suwet’en Nation have evicted a group of pipeline drillers from their traditional territory, sending a clear message to Enbridge, Pacific Trails and the entire oil industry: “We cannot and will not permit any pipelines through our territory.”

The Splatsin of the Secwepemc Nation are taking action against the proposed continuation of alienation from Cqltqín, an historical village site at the Mabel Lake outlet in British Colombia. In 2007, the City of Enderby and Regional District of North Okanagan applied to the Province to have the only remaining ~9-acre section of habitable land paved and turned into a permanent parking lot. Splatsin leadership are fighting this application which is in direct opposition to the UN Declaration of Indigenous Rights and will effectively cut-off access to this historic fishing and village site.

The World Bank is preparing to steamroll ahead with a new funding program that would virtually eliminate 26 of the Bank’s safeguard policies, including those meant for Indigenous Peoples, Environmental Assessments, Physical and Cultural Resources, Forests, Natural Habitats, and Involuntary Resettlement. At this point, the World Bank has not consulted any Indigenous Peoples about the proposed “Program for Results (P4R)” – and it likely will not do so, unless the international community can pressure them into it.

The U.S. House of Representatives approved a controversial “land swap” bill giving the UK-Australia mining giant Rio Tinto direct access to places considered sacred by the Apache and other Indigenous Peoples in southeastern Arizona. In exchange for the U.S. House of Representatives’ “gift”, Rio Tinto will hand over some other land that isn’t mineral rich. That is, land to the U.S. Forest Service and the Bureau of Land Management.

A group of Northern Territory Elders, Traditional Leaders and Community Representatives are speaking out against the Australian government’s plan to extend the Northern territory Intervention. The group states that, instead of continuing to blindly charging ahead with this blanket ‘experiment’, they should work with everyone on a case-by-base. Diplomatic discussions and consultations are also called for; And so too “an honest and comprehensive treaty negotiation with the Australian Government and facilitated by the United Nations.” The group also wants another apology for the “hurt, embarrassment, shame and stigma” they’ve caused since the Intervention began in 2007 (in large part due to outright lies from the government and the media – something most people still don’t know.)

Growing repression in southwestern Ethiopia is raising fears that soldiers–acting on behalf of Malaysian investors and the government–may soon start killing people for refusing to leave their traditional lands for large-scale sugar cane, cotton and biofuels plantations. The soldiers have already arrested more than 200 Bodi, Mursi and Suri Peoples, including elders and youth. They are also intimidating the Indigenous peoples and threatening them with death.

A palm oil company has forcibly evicted an indigenous community from one of the last tracts of rainforest in Indonesia’s East Kalimantan province on the island of Borneo. Abdon Nababan, General Secretary of the Alliance of Indigenous Peoples Archipelago (AMAN), said the conflict arose from the government’s failure to recognize traditional ownership of the forest land, which has been used for generations by Dayak Benuaq people.

The Panamanian government appears to be accommodating Ngobe-Bugle concerns about proposed reforms to the country’s mining code. Last February and March, the Ngobe-Bugle successfully negotiated a major shift in the proposed mining code that would have facilitated open-pit mining in their territories. However, the government at the time failed to account for most of the Ngobe-Bugle’s concerns. According to Commerce and Industry Minister Ricardo Quijano, that is no longer the case. He says “the mining bill will not affect the [indigenous] territories” nor include any features the Ngobe-Bugle’ object to. We’ll just have to wait and see if there’s any truth to that.

The Young Ancestors: The Young Ancestors follows a group of Native American teens, who under the guidance of a mentor, are learning their native language. In a broader context this is a story of the burgeoning movement led by Indigenous Peoples to revitalize their language and culture.

Wanggangarra… that which gives life: Wanggangarra is a film about family histories, relationships & respect amongst the Yindjibarndi and Ngarluma people of the west Pilbara, Western Australia.