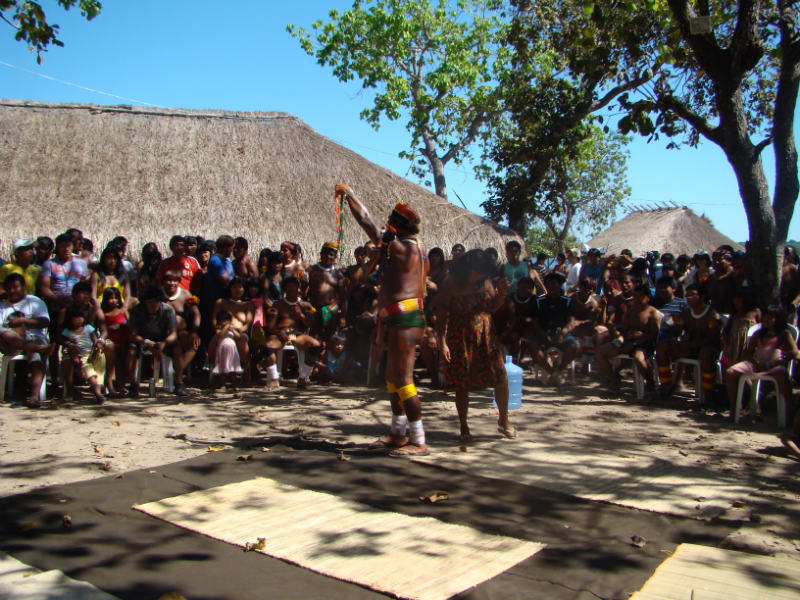 In this month’s Underreported Struggles: 1000 Indigenous people in Colombia warned that they would be killed if they tried to leave their communities; Aymaras in Peru lift their 45-day strike against the extractive industry; Indian government employees detained by villagers over hydro concerns; Indigenous communities in South Africa successfully halted mining operations that threatened their livelihoods.

Indigenous Leaders from the Xingu Indigenous Territory in Brazil, sent a stern yet hopeful message to the Brazilian government about their culture, their rights, their aspirations and the needs of their people. The letter was signed following the first-ever Festival of Xingu Cultures, which brought together all sixteen Indigenous Peoples in the Xingu Territory.

Aymaras in the Peruvian department of Puno lifted their 45-day strike against the extractive industry after reaching an accord with the government of Peru over the Canadian-owned Santa Ana mine. In the days leading up to the accord, Riot police opened fire on group of Indigenous protesters who were trying to raid an airport. Sic people died and three dozen more were injured . Western media inaccurately reported that the protesters were Aymara. They were in fact, Quechas, who were leading their own protest against mercury pollution on their land.

The Obama administration extended its ban on uranium mining within the Grand Canyon’s 1-million-acre watershed, putting an end to fears that even more mining claims and resulting mining projects could be on the way. The decision to safeguard the watershed will last until the end of 2011, around the time an environmental analysis of the issue is set to be released. Thousands of mining claims have already been filed in the watershed area.

Owners of Arizona Snowbowl ski area started clear-cutting rare alpine forest for new ski runs on the Holy San Francisco Peaks. According to an Environmental Impact Statement more than 74 acres are slated to be cut. More than a dozen protesters recently halted the “construction work” by locking themselves to heavy machinery and to each other inside the new waste water pipeline trench. More than 15 armed agents, including the FBI, showed after just six hours and broke the protest up.

Four government functionaries associated with a mega hydropower project in Himachal Pradesh’s Kinnaur district [India] were detained by villagers protesting over environmental issues. All four officials, who weren’t abused in any way, were released a day later, after the state-run Himachal Pradesh Power Corporation Limited (HPPCL) assured the villagers that most of their demands would be accepted.”

Citizens from the Yurok, Hoopa, Karuk and other Indigenous Nations, essentially turning a traditional practice into a protest, came together to gather seaweed, mussels and clams along California’s North Coast. If the state of California pushes through its proposed MLPA Initiative, the customary practice of gathering these and other subsistence resources would be outlawed.

Over the past 50 years, nearly 1.5 million tons of oil has been released into the delicate ecosystem of the Niger Delta in southeast Nigeria. It’s one of the worst and most shameful oil legacies in the world. But even so, the Ogoni haven’t lost hope. They may be ignored by the international community, but they are doing what they can to defend their land, their rights, and the chance to someday return to their normal life in a clean environment. https://intercontinentalcry.org/a-plea-to-the-international-community-dont-forget-the-ogoni/

Local populations around the world are standing up to the coal-fired power industry, resisting private and public-sector pressure to cast aside their rights, homes and livelihoods for projects that are clearly not intended for their benefit. As Grist.org highlights, hundreds of thousands of people in Malaysia, Bangladesh, India, Australia, Colombia and elsewhere are standing up and saying NO.

More than 1,000 Penans will be forcibly removed from their rainforest home and “dumped in a vast oil palm plantation to make way for the controversial Murum dam”, according to Survival International. The Penan have said that they don’t want to move, but the government is refusing to give them a choice.

The Sudan Democracy First Group (SDGP) accused the Sudanese army, with the support of a government-backed militia, of pursuing a genocidal campaign in South Kordofan which is targeting the indigenous Nuba peoples. The SDGP backed up the charge with a six-page report which details a number of the army’s atrocities and human rights violations of the Nuba.

Despite Argentina’s blanket ban on evictions of Indigenous communities, the Quilmes community of Colalao del Valle is facing its third eviction attempt in three years. Police officers already tried to disperse the community on April 29th; but the community, which is attempting to reclaim ancestral lands, resisted.

Word got out that the Canadian government started spying on Indigenous people almost immediately after Prime Minister Stephen Harper took office in January 2006. Information obtained by Access to Information requests revealed that the Department of Indian and Northern Affairs Canada (INAC) was permitted to start monitoring First Nations engaged in direct action to protect their lands and communities and to gather and share intelligence on “First Nation leaders, participants and outside supporters of First Nation occupations and protests.”

An initiative by Peru’s Ayacucho regional government to set up a committee to manage social conflicts related to the mining sector received some welcomed praise from sector experts. “[The project] seems very interesting and very innovative,” said the head of community rights and extractive industries at Lima-based NGO Cooperacción, José de Echave. “These types of initiatives are needed to create regional institutions that can start to look at the problems that can surface in the mining sector.” Perhaps other industry sectors too.

Communities in the Transkei Wildcoast’s Xolobeni area of South Africa successfully pressured the government to halt mining operations in the area. The Xolobeni area is considered the traditional home of the AmaDiba people who claim to have occupied the land for centuries. The AmaDiba Crisis Committee (ACC) said that, if the Xolobeni Mineral Sand mining project had proceeded as planned, the AmaDiba would have “faced permanent and significant changes to their traditional way of life and their connection to the land.”

After a decades-long effort to restore a healthy, free-flowing Elwha River, hydropower generators at the river’s two dams were finally shut down in preparation for the dam removal this September. The Elwha River on Washington’s Olympic Peninsula has been dammed for nearly 100 years. Removing the dams will revive the river’s legendary salmon runs, restore vital aspects of the Lower Elwha Klallam Tribe’s culture, and revitalize the ecosystem in Olympic National Park, from mountains to sea.

200 Indigenous people set up a camp outside of Paraguay’s Ministry of National Emergencies over issues related to land and assistance with crops. The encampment is comprised of members from at least eight Indigenous communities.

The Chilean Government announced the creation of a 210-acre marine reserve in the area of Hanga Roa Otia (Easter Island). The announcement was made by Pablo Galilea, the Undersecretary of Fishing, and, according to him, this reserve is a direct response to the strong demands made by Rapa Nui for protection of its marine wildlife in this area.

The Yanomami and Yekuana, outraged by the nomination of a new indigenous health coordinator they didn’t trust, captured an airplane used by health workers in protest. In the past, there have been major problems with corruption in the regional health office. Fortunately, the Yanomami and Yekuana, after protesting for a few more weeks, got what they wanted. The government agreed to assign their preferred candidate for the job.

Officials with the Ontario Ministry of Natural Resources (MNR) invaded Grassy Narrows Territory to demand that a company contracted by the community halt maintenance work on a road used for emergency evacuations. After using a helicopter to bypass Grassy Narrows’ blockade, the officials threatened the contractors with hefty fines unless they stopped what they were doing. MNR refuses to allow any lawful work on the road until Grassy Narrows agrees to lift their long-standing blockde against logging within the territory.

Before There Were Parks: Yellowstone And Glacier Through Native Eyes
For more than 12,000 years, the intermountain West’s native peoples have called the lands known as Yellowstone and Glacier National Parks “home.” This program explores modern indigenous perspectives on these great wilderness areas and explores the cultural divide that separates modern times from the not-so-distant past.

Saving Our Land: The People of Bougainville Speak Out
Clive Porabou’s new documentary “Saving Our Land” gives voice to the silent majority of Indigenous People in Mekamui/Bougainville who are against Rio Tinto’s plans to re-open the notorious Panguna mine.

Paraiso for sale
What price would you pay for paradise? And who would you be willing to take it from? PARADISE FOR SALE takes a look at the fast-growing migration of American retirees and developers to Bocas del Toro, Panama; and the effect it is having on a local Ngobe community. Through the film, we learn that the migration between Latin America and the US isn’t just a one way street.